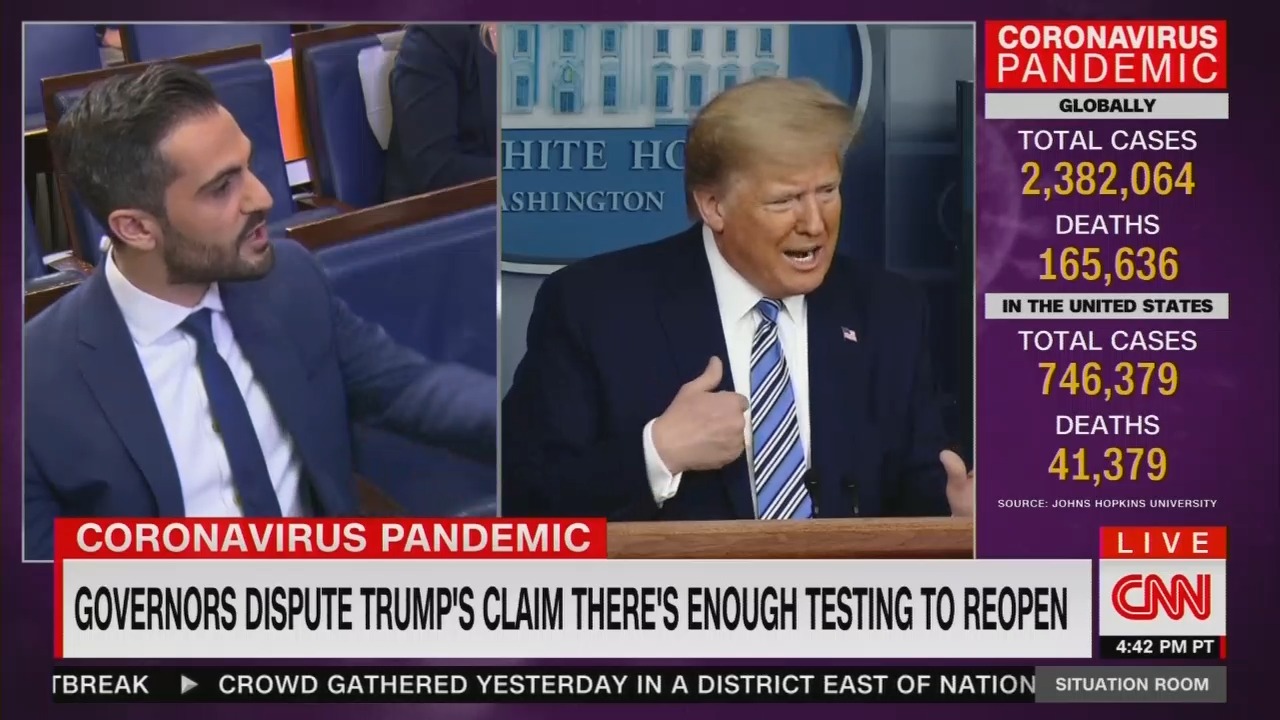 Things ended poorly for both with the former being told to be “relax” and stop shouting and the latter being called “pathetic,” having questionable levels of brainpower, and working for a “fake news” network with “terrible ratings.”

Starting with Jiang, she sunk herself by fretting that while Trump expressed anger with China for not doing enough at the onset, “many Americans are saying the exact same thing about you that you should have warned that the virus was spreading like wildfires through the month of February instead of holding rallies with thousands of people.”

“Why did you wait so long to warn them? And why did you not have social distancing until March 16,” Jiang added.

TRUMP: Nice and easy, relax. We cut it off. People were amazed. These gentlemen, everybody was amazed that I did it. We had 21 people in a room. Everybody was against it but me. Dr. Fauci said had I not done that, perhaps tens of thousands and maybe much more than that people would have died. I was very early, very, very early and we just saw, you saw Bret Baier making a statement. They had a debate well into February and not even mentioned — it wasn’t even mentioned, the Democrats —

TRUMP: We were very early. Ohhhh, I’m the President.

JIANG: — and it was spreading so quickly.

JIANG: And by the way, when you issued the ban, the virus was already here.

JIANG: They were here already.

TRUMP: No, no, how many cases? Remember I said one person. How many cases were here when I issued the ban?

JIANG: But did you know it was spreading from —

TRUMP: No, no, you have to do your research.

Jiang continued to interject, so Trump told her to “keep your voice down, please.” Yikes.

Trump later ended by stating that, on the China travel ban, reporters should instead “say thank you very much for good judgment.”

Mr. President, 22 — more than 22 million Americans are currently unemployed as a result of this. We hit the grim milestone of more 40,000 Americans now having died from the coronavirus. Can you explain, then, why you come out here and you are reading clips and — and — and showing clips of praise for you and for your administration? Is this really the time for self-congratulations?

Trump insisted that he wants to ensure Vice President Mike Pence, military officials, and military doctors and nurses are credited because “those people have been just absolutely excoriated by some of the fake news like you, you’re CNN, you’re fake news.”

The President then called out Diamond’s intelligence: “They were excoriated by people like you that don’t know any better because you don’t have the brains you were born with. You should be praising the people that have done a good job, not doing what you do, even that question.”

Moments afterward, Trump conceded that “you’re never going to treat me fairly, many of you, and I understand that.” And in closing out the first of two bouts, Trump threw another jab: “[P]eople should give them credit, including people like you because you just don’t have the sense to understand what’s going on.”

Diamond used his second exchange to wonder why Trump wasn’t hammering China (and President Xi Jinping) from the get-go. Though Trump wouldn’t concede it, the entire world (minus perhaps Taiwan) was duped by them (along with the World Health Organization).

Trump tied his change of heart on China through their trade deal that he thought would improve relations, but was stymied by China’s coronavirus lies.

None of that satisfied Diamond, who kept shouting even though no microphone could pick up what he was saying and so Trump once again torched Diamond, the CNN sent by Zuckerville (click “expand”):

TRUMP: I find out. I’m not happy, you people are so pathetic at CNN.

DIAMOND: How about informing people on February 23rd?

TRUMP: — before Pelosi. Listen, long before Pelosi, you know, she was having parties in San Francisco, let’s all go to China town and that was a long time after I closed up the country.

MARK MEREDITH: The first — the first about this next week —

TRUMP: That’s why your ratings are so bad, because you’re pathetic. [TO MEREDITH] Go ahead, let’s go.

TRUMP: Your ratings are terrible. You got to get back to real news.

Female ESPN Reporter Announces She Will Transition to Being a Man
Western Propaganda Continues to promote the Meme that Russia Is Toast
Over 816,000 pills and 328 pounds of cartel fentanyl stopped near Arizona border
BREAKING: Trump confirms the FBI has raided his residence at Mar-a-Lago
Twitter Birdwatch Smacks Biden Press Secretary for ‘Misleading’ Americans on Inflation