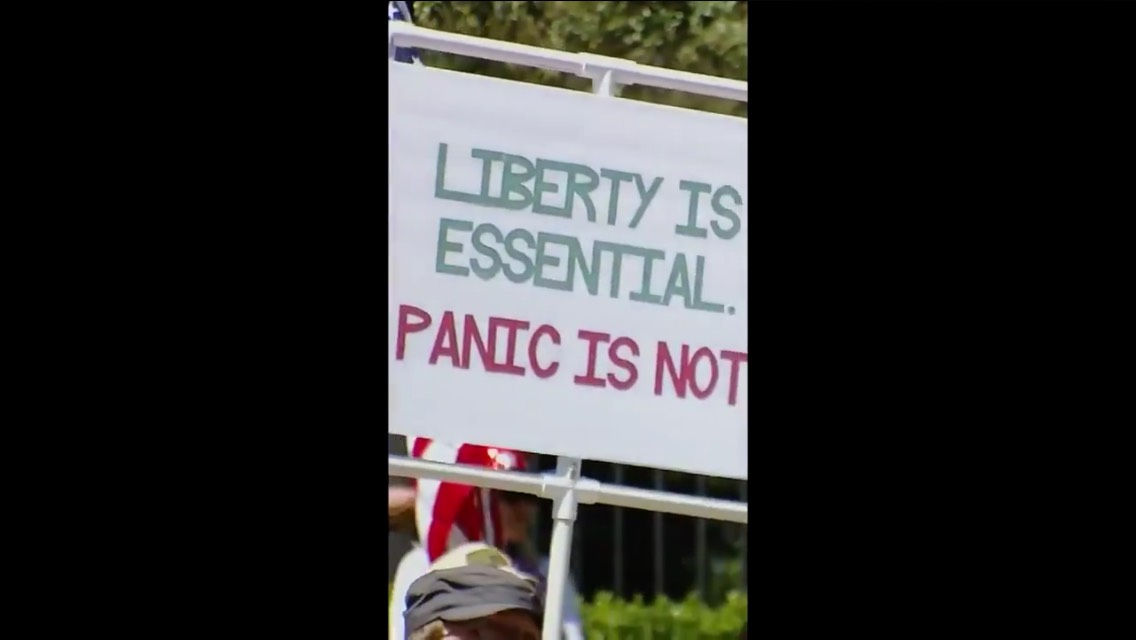 Univision’s senior anchor has once again used his privileged platform on Facebook Watch in order to smear Americans who think differently from him. This time, his loaded propaganda is aimed at those who seek an easing of restrictions so that Americans may return to work and provide for their families- even in the face of layoffs at his parent company.

As you’ll see below, Ramos opened his April 23rd episode of “Real America” by smearing the movement to reopen America as “a war on science, a war on facts, a war on public health, and a war truth”, while engaging in his own little war on truth by showing presidential statements in reverse chronological order so as to highlight a manufactured contradiction (click “Expand” to view transcript):

JORGE RAMOS: This is the new battlefield in America’s culture war.

PROTESTER: We do not stand alone.

TRUMP: I think they listen to me. They seem to be protesters that like me.

RAMOS: This is a war on science. It’s a war on public health. A war on facts. And a war on the truth.

DR. ANTHONY FAUCI: If you jump the gun, it’s going to backfire. That’s the problem.

RAMOS: Trump wants to restore the country, but he cannot even agree with himself on how to do it.

TRUMP: Now that we have passed the peak in new cases, we’re starting our life again. We’re starting rejuvenation of our economy again…

RAMOS: On script, he says one thing.

TRUMP: Governors will be empowered to tailor an approach that meets the diverse circumstances of their own states…

RAMOS: Off-script, he has a different message.

TRUMP: When somebody is the president of the United States, the authority is total. The governors know that.

As we see with his deceptive staging of the Trump quotes his isn’t the first time that Ramos tinkers with context in order to support a point- he recently cherry-picked two seconds of Dr. Anthony Fauci’s interview with Jake Tapper in order to slam the Trump Administration’s response to the coronavirus pandemic.

This episode of “Real America” had the feel of an extended political ad. First, the interspersion of protester footage with clips of Trump- scored with ominous background music. The tone then shifted completely for the portion featuring Governors Andrew Coumo of New York and Gavin Newsom of California- right down to the hopeful music. Finally, Ramos closed with his own “special comment” in favor of an extended lockdown lest we go “back to square one”. Ramos thus casts the debate on how quickly to reopen the country for business as a (false) choice between lives or the economy.

As is the norm on “Real America”, the only side of any given argument to be covered is whatever side Ramos is on. There are no interviews of persons who want to get back to work, no discussion of how some states have infringed on individual constitutional rights while enforcing their lockdowns, no interviews of red-state governors (but much bashing), and no discussion whatsoever of the potential human toll of an extended lockdown. There is only Ramos, a field full of straw men, a torch, and a slew of opinions with no factual basis, such as: “This is the new battlefield in America’s culture war”, and “This is a war on science. It’s a war on public health. A war on facts. And a war on the truth.”

Ramos’ criticism of those who want to reopen the country for business comes amid massive furloughs and layoffs at Univision, as reported on Forbes. It should be noted that the brunt of these cuts weren’t borne by elite media types like Ramos, but by working-class backstage crewmembers who now have to scramble at the same time that Ramos condemns them for wanting to get back to work and feed their families.

That’s what’s going on in Real America, as opposed to the liberal propaganda disguised as journalism that Ramos depicts and that both Univision and Facebook continue to indulge.

Bombshell news about Pfizer’s covid jab causing infertility leads to #Pfertility hashtag going viral
Woman accused of trying to kill doppelganger friend with poisoned cheesecake so she could steal her identity and return to Russia where she is wanted for murder of another woman
Merck’s new covid pill linked to virus mutations, study finds
Electric vehicles are a SCAM â here’s why
Junior Varsity Basketball Player Suffers Seizure and Cardiac Arrest During Game