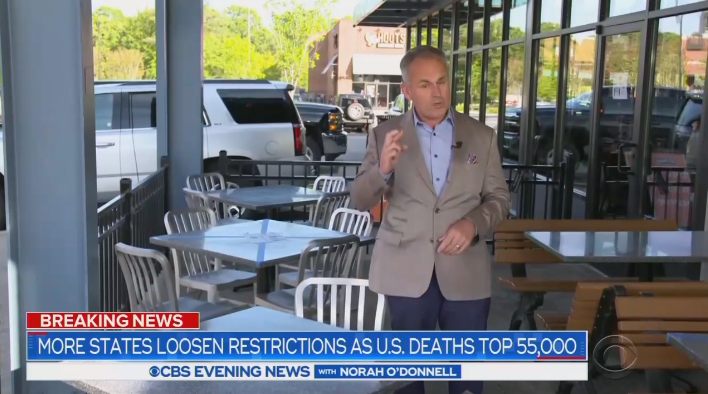 Arguably, nothing was more elitist than journalists, who don’t need to worry about losing their jobs overnight, whining about unemployed people getting their income back. But the elitist anger of CBS Evening News and NBC Nightly News notably only found select targets Monday night: red states, while states ran by Democrats were largely sheltered from their scorn.

CBS was the most spiteful in their condemnation of getting desperate people getting a source of income again. Anchor Norah O’Donnell used her opening monologue to gilt trip the unemployed.

“That burnout combined with rising unemployment is leading 19 states to loosen restrictions and reopen some businesses and restaurants,” she said. “But in many of those states, the number of infections is still rising. Tonight, there are more than 985,000 confirmed cases in the U.S. Nearly 56,000 people have died nationwide.”

And CBS correspondent Mark Strassmann’s animosity toward Republican-controlled Georgia was obvious as he began his report, lashing out their intelligence. “Norah, riding out a pandemic in Georgia suddenly has options. You can go to dinner and a movie, you can get a haircut, a workout, a tattoo. And if you’re wondering, does any of that sound smart, well, so are many Georgians,” he chided.

Despite admitting there was “soaring unemployment” in the state, Strassmann declared that their “impatience is the new pathogen” Then, sporting a grimace on his face, Strassmann concluded his report by standing on the patio of a Georgia restaurant. He wrote off their efforts at keeping people safe by declaring: “fingers crossed that everyone’s safe.”

Strassmann did note that “at least 19 states have already loosened some restrictions. 17 more will loosen them by this Friday, May 1.” But he chose to single out Georgia, with no specific comments about any of the blue states reopening.

Over on NBC Nightly News, anchor Lester Holt’s opening comment was hostile and inconsiderate of the desperate unemployed.

“Ready or not, and with a million confirmed COVID-19 cases in the U.S. since the start of this outbreak, parts of America are moving on tonight,” he arrogantly proclaimed. “The simple touchstones of life as we remember it; from shopping in a store to dining at a restaurant rapidly returning in a country dividing over how far to go to halt the spread of the virus, which has claimed over 55,000 lives here.”

The following report by Blayne Alexander specifically called out Mississippi, Texas, Oklahoma, Tennessee, and Georgia (in that order) for reopening their economies. All of them have Republican governors. She briefly noted that “Iowa and Colorado joining eight other states starting to reopen.” The later had a Democratic governor and only received that notation.

In contrast, ABC’s World News Tonight didn’t strike a combative stance and spoke with a restaurant owner in Georgia who got emotional. He was happy he could support his workers, who he called his family, again.

NORAH O’DONNELL: The new plan comes as more and more Americans are suffering for what’s being called “quarantine fatigue,” a desire to return to a more normal life after weeks of staying home. That burnout combined with rising unemployment is leading 19 states to loosen restrictions and reopen some businesses and restaurants. Even more plan to do so by May 1st.

But in many of those states, the number of infections is still rising. Tonight, there are more than 985,000 confirmed cases in the U.S. Nearly 56,000 people have died nationwide.

And CBS’s Mark Strassmann is going to lead us off tonight outside Atlanta. Mark?

MARK STRASSMANN: Norah, riding out a pandemic in Georgia suddenly has options. You can go to dinner and a movie, you can get a haircut, a workout, a tattoo. And if you’re wondering, does any of that sound smart, well, so are many Georgians.

Dining out during America’s contagion. A waitress wearing a mask and gloves trying to serve reassurance. Table service returned today to Atlanta’s four Bad Daddy Burger Bars. This sign reminded everyone safety is on the menu.

STRASSMANN: Any Georgia restaurant could reopen, from a breakfast chain to a local pizzeria, but few in Atlanta did, and most of their tables sat empty. Governor Brian Kemp’s hungry to reverse Georgia’s soaring unemployment, more than one million new claims in four weeks. But health experts worry impatience is the new pathogen, for governors and consumers.

STRASSMANN: For any state to reopen, White House guidelines call for a two-week downward trend of documented COVID cases. No states meet that standard.

Over Georgia’s last two weeks, COVID cases have jumped 38 percent, and COVID deaths 51 percent. As of today, at least 19 states have already loosened some restrictions. 17 more will loosen them by this Friday, May 1st.

[Cuts back to live]

STRASSMANN: Inside this reopened restaurant, there are a few people eating inside. And on the patio here, every other table is marked off to help keep the parties at least six feet apart. The staff is wearing gloves and masks. The menus are disposable. And now, Norah, fingers crossed that everyone’s safe.