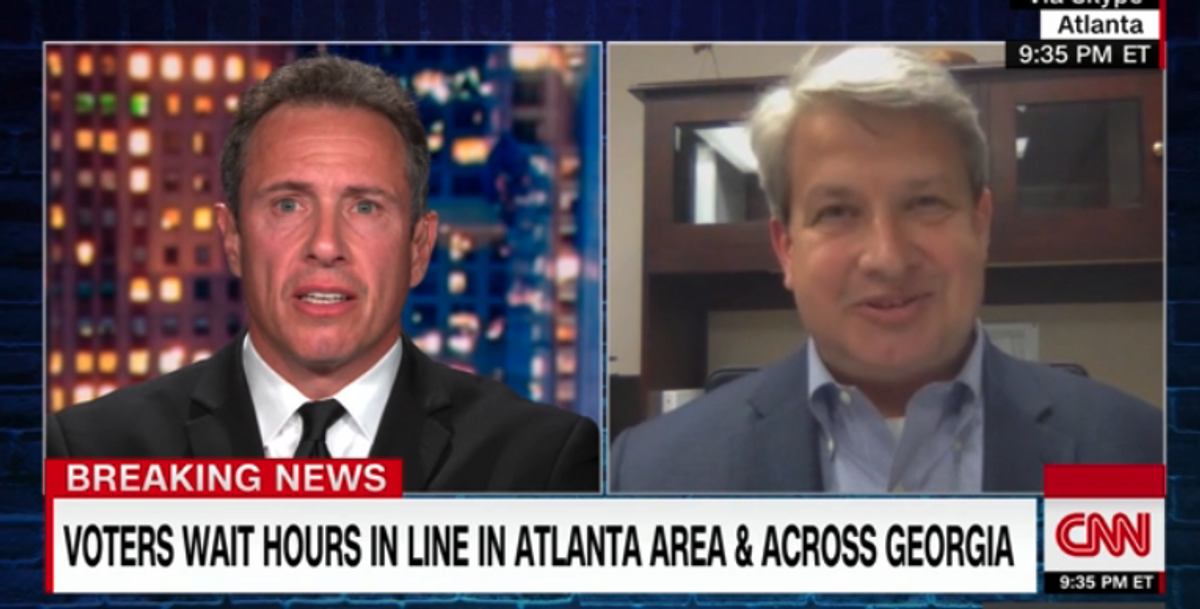 The state had been accused by several members of the media of disenfranchising minority voters after long lines and delays occurred in predominantly black precincts during Tuesday’s primary election.

Cuomo himself threw out an allegation at the start of the segment, saying, “Here is the tragedy of the travesty that the president has created on this issue: We have real voter suppression concerns. One is playing out now [in Georgia].”

Cuomo then turned to Sterling: “People are concerned that what they saw today is a reflection of what they’ve seen before, which is disenfranchisement of minorities who tend to vote Democrat. Your take?”

Then the tables turned

“Well, the reality of what you’re seeing in Georgia today is a function of the COVID situation in large part,” Sterling countered, according to video of the exchange uploaded by NewsBusters. The Georgia voting official then explained that many polling places were lost as host sites pulled out last minute due to the pandemic.

Sterling then specifically cited Fulton County, which “collapsed many of those locations into mega precincts” despite the advice of state election officials who told them “this is not a good idea, you need to find other alternative locations.”

As for who is in charge of making those decisions, Sterling noted, “They are made at the county level and the state has zero ability to tell them not do that.”

Sterling continued to push back against claims of voter suppression, arguing that the long lines and delays were also due to an influx of new poll workers who unfortunately were not trained well by officials in some counties. The average age of poll workers in the state had been 70 and many of those people opted not to work this time around over health concerns.

“Isn’t that still on you?” Cuomo said. “I mean, these are your people, this is your planning and, you know.”

“We do not employ poll workers to those locations,” Sterling insisted before acknowledging that everyone is in agreement that a greater emphasis on training is needed moving forward.

“No, no, no. The machines are new, the problem is not,” Cuomo contended. “In 2018, 87,000 people were prevented from voting, a disproportionate number were people of color and young voters. I agree with you that you had anticipation of a turnout. You had to prepare for it, it doesn’t seem you did. And it seems convenient, if you’re going to be not able to handle the demand, it’s nice that you do it in places that tend to vote Democrat.”

At this point, a fed-up Sterling shot back, “Those counties where people tend to vote Democrat, are run by Democrats, and they’re the ones that set the elections boards, they’re the ones who hire the staff.”

He then went on to note that the primary county in question, Fulton County, home to Atlanta, has had problems for years and has paid hundreds of thousands of fines for election rules violations.

By the end of the interview, Cuomo had dropped his “real voter suppression” claims in exchange for simply saying, “Gabe, look, I’m not looking to ascribe animus, I’m just saying it looks bad.”