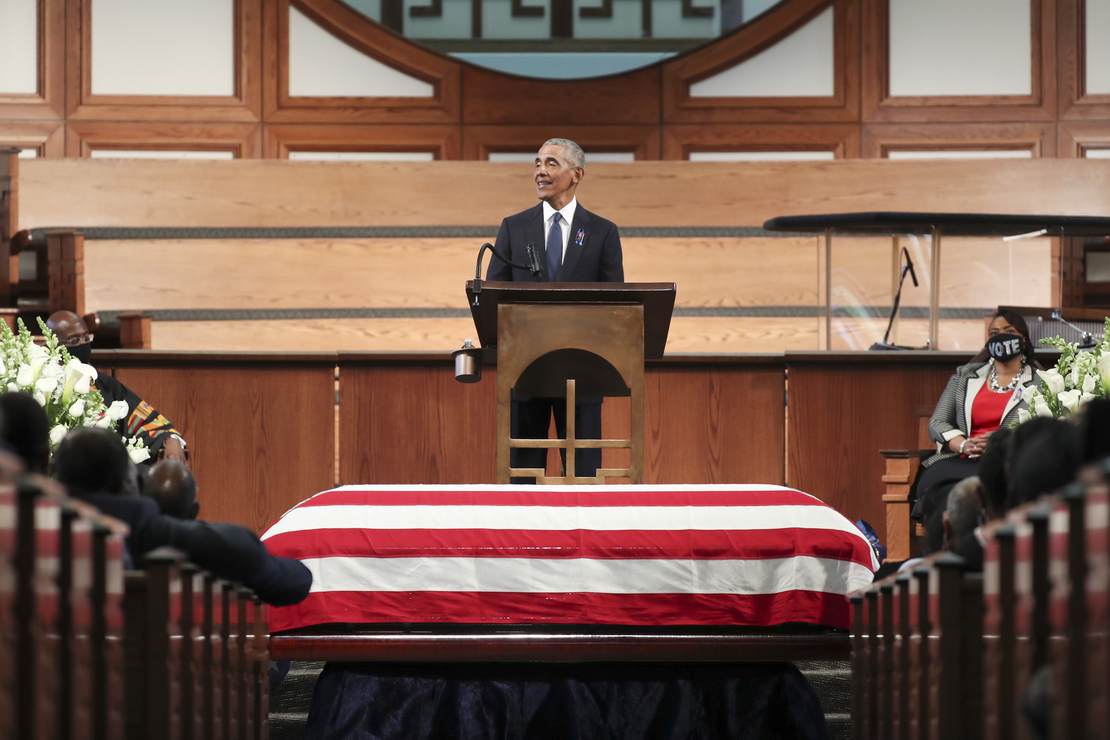 “George Wallace may be gone, but we can witness our federal government sending agents to use tear gas and batons against peaceful demonstrators,” Obama claimed, repeated the false talking point that violent rioters were “peaceful protesters.”

“Even as we sit here, there are those in power who are doing their darnedest to discourage people from voting,” he falsely claimed. “By closing polling locations and targeting minorities and students with restrictive ID laws and attacking our voting rights with surgical precision.”

There is no evidence that voter ID diminishes the ability of anyone to vote, and a whopping eighty percent of Americans support Voter ID laws, including 77 percent of non-white Americans.

Obama then indirectly accused Trump, without evidence, of “undermining the Postal Service in the run-up to an election that’s gonna be dependent on mail-in ballots so people don’t get sick.”

Obama acknowledged the apparent partisan turn his eulogy was taking, but quickly declared it justified. “I know this is a celebration of John’s life,” he said. “There are some who might say we shouldn’t dwell on such things. But that’s why I’m talking about it.”

“Everybody’s got to come out and vote,” he said.

Not even the Supreme Court was immune from Obama’s attacks, declared any law designed to ensure the integrity of our elections as “bogus voter suppression” laws, and calling for a litany of Democrat agenda items such as expanding early voting and making Election Day a national holiday. Obama also called for the end to the filibuster in the Senate—something Democrats were only willing to do as the majority—which he called a relic of Jim Crow.

Obama’s speech resulted in comparisons to the infamous funeral of Senator Paul Wellstone in 2002, which despicably turned in a campaign rally type event.

So I see John Lewis’ funeral has become a campaign rally a la Paul Wellstone, huh?

If a Republican said the sorts of things at a funeral that Barack Obama is saying, the very reporters currently nursing their erections would be furious about how divisive and partisan the guy was.

The John Lewis funerally was even more distasteful than those for Paul Wellstone and George Floyd. The spectacle was nothing more than a fount of desperate cynicism.

This was the Paul Wellstone funeral all over again. President Obama never misses an opportunity to sow seeds of class/race divisions. Such an empty suit.

Was thinking about Wellstone’s funeral during Obama’s eulogy.

It’s the Paul Wellstone funeral all over again. Democrats can’t help themselves when it comes to exploiting dead people. They’re gonna have 7 more memorial services for Lewis, take his casket on tour to the convention. Screw Obama. #SickPeople https://t.co/43bemoLK69

Well that was a Wellstone moment by Obama! Pitiful.

This is how bad things are: I’m worried that Obama’s eulogy of #JohnLewis will create a Wellstone-eulogy type backlash. You folks remembered what happened in Minnesota. Hope I’m wrong.

#thefive so the Lewis funeral turns into a copy of the late Senator Wellstone funereal, what is Obama scared from, Biden can’t close the deal,just like Hillary couldn’t

Matt Margolis is the author of the new book Airborne: How The Liberal Media Weaponized The Coronavirus Against Donald Trump, and the bestselling book The Worst President in History: The Legacy of Barack Obama. You can follow Matt on Twitter @MattMargolis