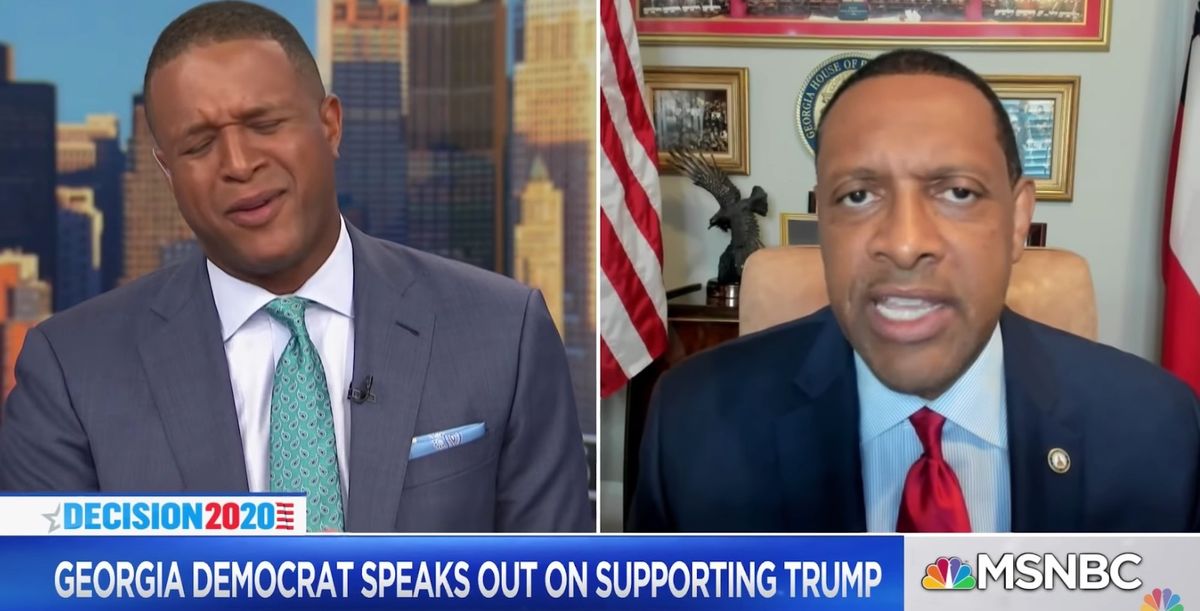 Vernon Jones has made a bit of a name for himself since he endorsed President Donald Trump for re-election in April.

Jones is something of a rare bird: He’s a black Democratic lawmaker from Georgia who praises the president’s policies that help the black community.

His support for Trump has made him a pariah on the left, where black voters are considered a reliable voting bloc for the Democratic Party, and he has made no bones about how he feels about his critics.

Which is why when an MSNBC host asked him if he was being paid by the Trump campaign, Jones lit into the interviewer and called out his and his network’s agenda regarding black Trump supporters.

In April, Rep. Jones told the Atlanta Journal-Constitution that he was backing Trump because of his “handling of the economy, his support for historically black colleges and his criminal justice initiatives.”

He not only voiced support for the president, he also took shots at presumptive Democratic nominee Joe Biden, saying the former vice president has “betrayed black Americans throughout his career in Washington.” He also blasted Democrats like Biden for showing support for the black community only when the party needs their votes.

“We cannot be tricked again,” he wrote in a July 7 op-ed. “Democrats like Biden will conveniently appear in our neighborhoods and pander to us from now until November. Why? Because they only care about black people during election years.”

Days after Jones announced his endorsement, he said he was resigning from the state Legislature, citing attacks from fellow Democrats. However, a day later he declared he wasn’t going anywhere and said he was not going to allow “the Democrats to bully me into submission,” adding, “I will not let them win. I will NOT resign.”

What did the MSNBC host do?

During a heated interview Wednesday, MSNBC’s Craig Melvin responded to Jones’ litany of reasons for supporting Trump by asking the lawmaker if he was being paid to back the president — apparently rather than being able to form his own opinions.

After accusing Jones of saying things that were “patently false” about the president’s record, Melvin asked, “Are you a paid campaign surrogate? Are you being compensated?”

But Jones was ready to fight back.

He wasn’t done: “See, that’s the problem. When an African American—”

But Melvin interrupted so say, “Sir, I did not raise your race,” and added, “You’re not going to imply that I asked that question because you’re black.”

Jones was not to be deterred. He let Melvin, MSNBC, and the left have it: “You only ask me that because I don’t fit your narrative.”

“It’s what I can do for my country, and you need to accept that many other African Americans and others support this president because of his policies,” Jones said. “And to insult me to say, ‘Am I getting paid?’ — that is disgraceful, that is horrible, and that’s representative of MSNBC and their narrative to keep blacks silent who happen to support this president.

“Why can’t I be like white liberals or other whites? Nobody questions if they’re getting paid,” Jones wondered. “So I have to get paid? Do you ask Democrats do they get paid? Are you getting paid by Joe Biden?”

Melvin told Jones that he has asked liberals if they’ve been paid by the Biden campaign, but Jones quickly noted, “I haven’t heard it.”

Not the first time for MSNBC

As The Hill noted, this isn’t the first time MSNBC has been called out for asking a black Trump supporter if he’s being compensated for supporting the president.

On July 25, MSNBC host Tiffany Cross asked Trump adviser and Republican activist Bruce LeVell is he has a financial incentive for backing Trump.

LeVell noted that he’s known Trump since 2015 and that the president wanted to help “people like me.”

“When I see folks like you support this President, has Donald Trump e… https://t.co/609DYhJDeI