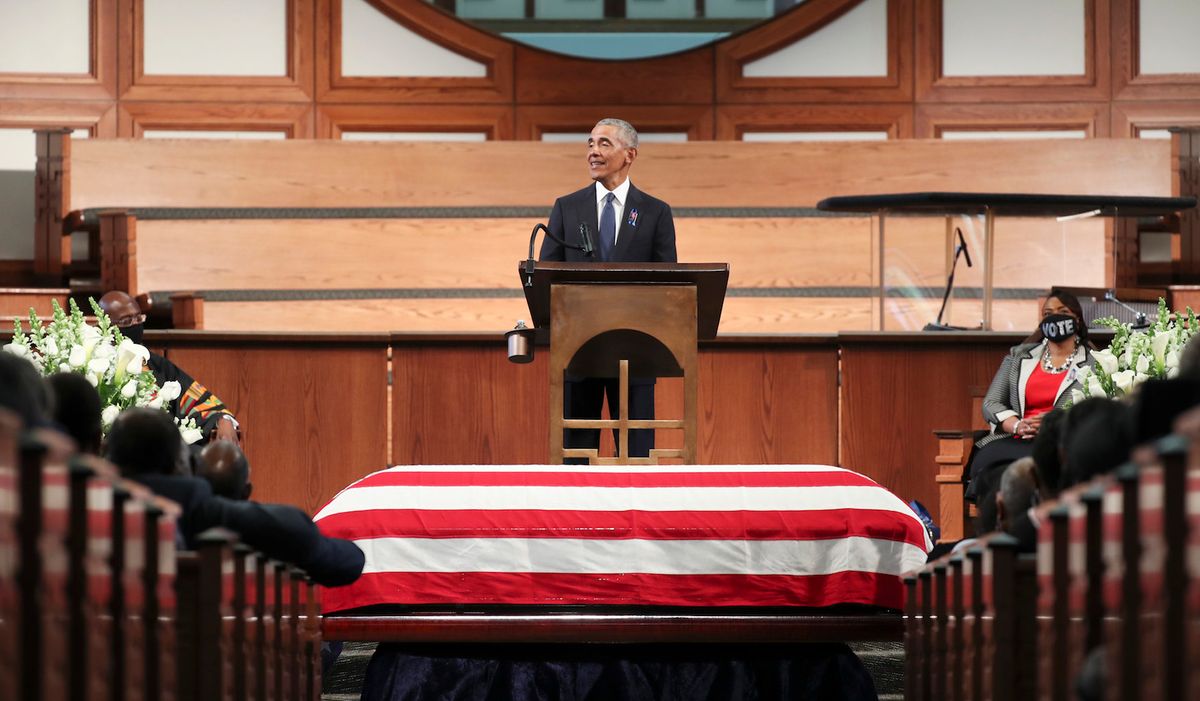 Former President Barack Obama made some pointedly political remarks during his eulogy for the late congressman and civil rights icon John Lewis on Thursday, taking aim at President Donald Trump’s use of federal agents to quell riots across the country, according to Forbes.

Former Presidents George W. Bush and Bill Clinton also spoke during the funeral, and former President Jimmy Carter sent a letter that was read. Trump had no role in the ceremony, but he was clearly on Obama’s mind.

“Bull Connor might be gone, but today we witness with our own eyes, police officers kneeling on the necks of black Americans,” Obama said. “George Wallace may be gone, but we can still witness our federal government sending agents to use tear gas and batons against peaceful demonstrators.”

Obama: “Bull Connor might be gone, but today we witness with our own eyes, police officers kneeling on the necks of… https://t.co/s3y942XIZ1

Under the governorship of George Wallace in Alabama, authorities responded violently to voting rights protests. Wallace was an enthusiastic supporter of racial segregation and discrimination for much of his political career.

Obama also took a thinly-veiled shot at President Trump on the topic of mail-in voting, accusing the president of attempting to suppress the vote by sabotaging the postal service.

“As we sit here, there are those in power who are doing their darnedest to discourage people from voting by closing polling locations and targeting minorities…even undermining the postal service in the run-up to an election that’s going to be dependent on mail-in ballots so people don’t get sick,” Obama said.

President Trump caused a stir Thursday morning with a tweet in which he suggested that the election be delayed because universal mail-in voting would create unprecedented levels of election fraud.

“With universal mail-in voting (not absentee voting, which is good), 2020 will be the most inaccurate and fraudulent election in history,” Trump wrote. “It will be a great embarrassment to the USA. Delay the election until people can properly, securely, and safely vote?”

With Universal Mail-In Voting (not Absentee Voting, which is good), 2020 will be the most INACCURATE & FRAUDULENT E… https://t.co/VcSCg7IPwj

Accusations against Trump of sabotaging the postal service come from recent USPS changes that could slow mail delivery as the election approaches.

“Overtime will be eliminated…If the plants run late they will keep the mail for the next day,” an internal USPS memo reads, according to Fortune. “If we cannot deliver all the mail due to call offs or shortages of people and you have no other help, the mail will not go out.”

The changes are reportedly for the purpose of saving money during difficult financial times.