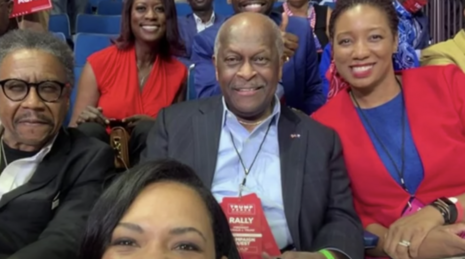 Sadly, successful businessman, conservative leader and former Republican presidential candidate Herman Cain died from coronavirus on July 30. Cain was a proud American who didn’t let fears of a pandemic slow down his willingness to share our nation’s values with citizens all over the country.  However, the left’s obituary of Cain gave the opposite impression of Cain, who they view caused his own death by being skeptical of the media and being a Trump stooge.

Radical lefties couldn’t just wish Mr. Cain a peaceful passing, they had to lecture him beyond the grave about how his death due to coronavirus was something he could have avoided by not listening to Trump’s “misinformation” about the virus, by wearing a mask, and by not attending Trump’s Tulsa rally.

CNN and The View contributor Ana Navarro nagged Cain in death for exposing himself to Coronavirus at Trump’s rally. Although there’s no proof that Cain contracted the virus at the event, as he had been traveling all over the country for weeks, pictures of him at the June Trump event WITHOUT a mask had her seeing red.

Within hours of his death, Navarro tweeted, “Herman Caín thought Covid was a hoax, scoffed at wearing a mask. Died of Covid.” Wow, what a heartfelt condolence. She then went after other conservatives who haven’t embraced abject fear during the plague. “Bill Montgomery, co-founder of pro-Trump, Turning Point USA, scoffed at virus. Died of Covid. Rep. Gohmert refused to wear a mask. Has Covid. See a pattern? Covid doesn’t care about partisanship.” But look how far she’s willing to go for “partisanship.”

MSNBC host Joy Reid offered condolences to the Cain family, along with a subtle twist-in of the political knife. She tweeted, “Herman Cain has died, weeks after attending Donald Trump’s Tulsa rally, not wearing a mask. Condolences to his family.” Yes, thanks for clarifying, Joy!

Radio and talk show host Chip Franklin’s words of sorrow were more callous indictments of both Cain and the Covid-suffering Rep. Gohmert. He tweeted, “Herman Cain is dead. He didn’t wear a mask. Louie Gohmert didn’t either. He’s asymptomatic. Who knows who he’s killing. See a theme?” 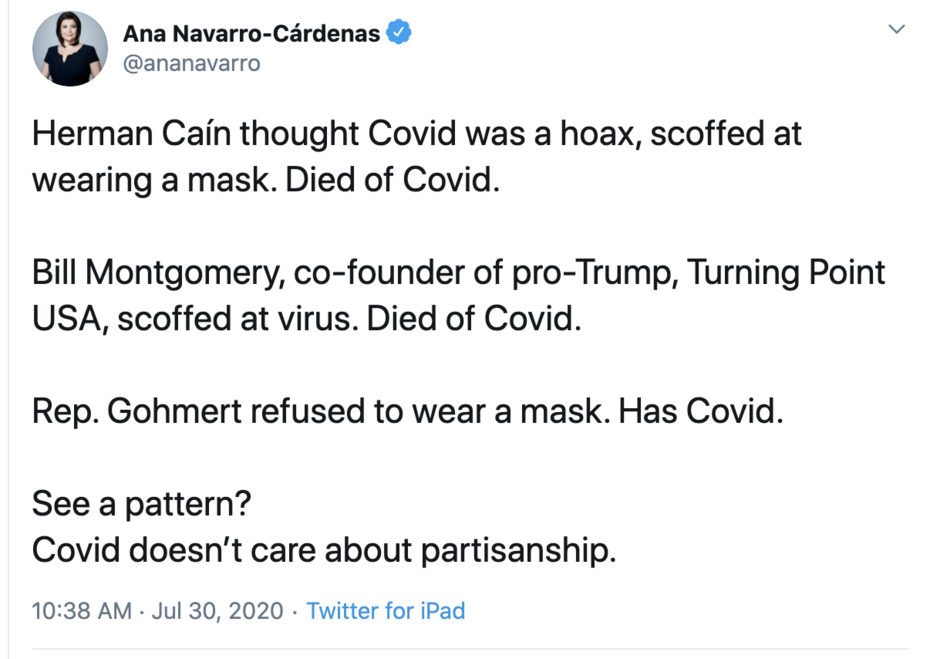 King added, “And they loaded thousands of people into a closed stadium anyway. And they all took their masks off and danced & sang during a pandemic.” Though, Mr. King, what about the 26 million people who attended the George Floyd protests for the sake of your pet cause?

CNN political analyst April Ryan tweeted, “waiting for a tweet from @realDonaldTrump on the death of @THEHermanCain who died of Covid after that Tulsa rally!  @realDonaldTrump has blood on his hands for all these deaths that should not have been.” We’re sure the Cain family appreciates those kind words.

Drake and Josh actress Yvette Nicole Brown got sassy about Cain’s death, too, referring to Mr. Cain as Trump’s “one black friend.” Real nice. The actress tweeted, “His (one black) friend #HermanCain has died of a virus HE called a hoax.” Wow, and she’s an ardent BLM supporter? Where’s the respect for Mr. Cain as a black man?

Former “Occupy Democrats” managing editor Brian Tyler Cohen tweeted, “Herman Cain would be alive right now if Trump didn’t hold a rally in the middle of a pandemic.” He also added to Cain’s memory by saying he died because “Trump decided he needed claps.” What kind words.

Vox journo Aaron Rupar attempted to embarrass Cain, tweeting only a short while after the news that “Herman Cain’s last public appearance was appearing at Trump’s Tulsa rally without a mask. He posted an anti-mask tweet the day before that has since been deleted.” Yeah, and we all know how much libs respect people who eschew masks.

Former ESPN pundit and contributor for The Atlantic Jemele Hill politicized Cain’s death also, by fixating on a tweet from Herman Cain’s account the night before his death that called into question the trustworthiness of the media. Hill whipped out a huge “I told you so,” tweeting, “Whoever is running his twitter account thought it was more important to stay on brand than to be cognizant of the fact that Herman Cain was dying from this virus.”

She did call Cain’s death “sad and unfortunate” but because he was a victim of the “politicization of public health” which is endangering people’s lives. Yes, yes, he was a victim of Trump’s war on fake news. It’s amazing how much respect many of these folks afford for lifelong criminals like George Floyd, who had Covid and wasn’t wearing a mask in public when he was arrested. But when an accomplished African American like Cain dies, they just throw him peanuts at best, or say he was asking for it at worst.