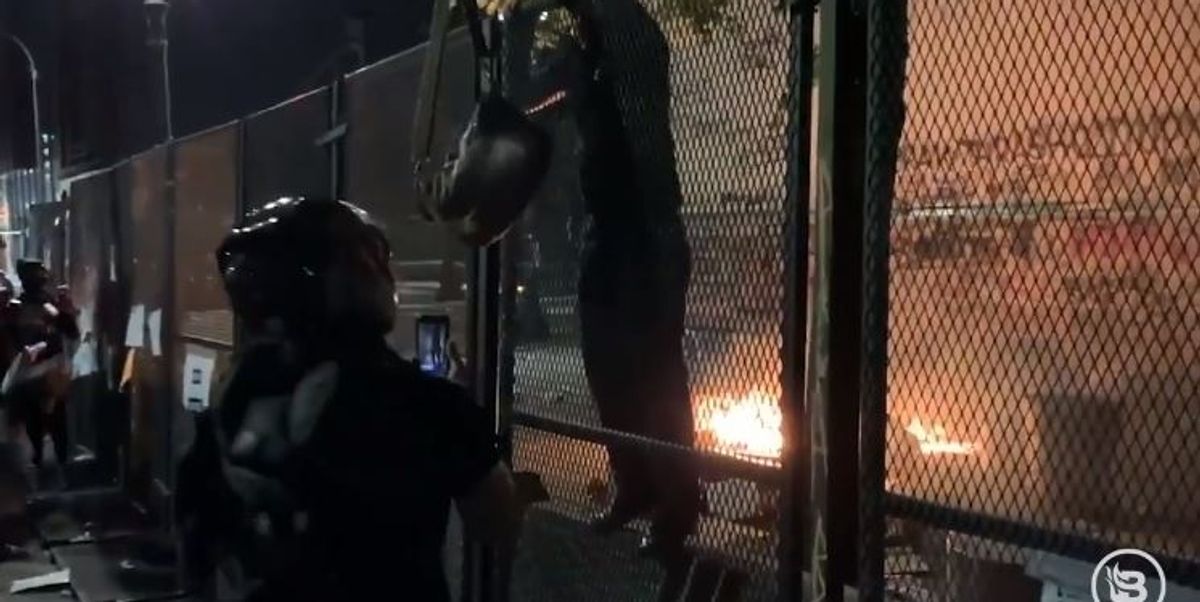 Slightly Offens*ve host Elijah Schaffer interviewed a protester who alleged that federal officers shot at him for just peacefully protesting and supporting Black Lives Matter. What the protester did not know, Elijah caught him on camera earlier that evening, allegedly setting a fire outside a federal courthouse in Portland.

In this clip, the protester and his girlfriend claimed that federal officers shot him six times with beanbags while he was peacefully protesting.

“What were you doing at the time [the feds] shot you?” Elijah asked.

“At the time, what I was doing was banging on the fence and chanting, ‘Black Lives Matter. All cops are bastards,'” the protester replied.

Appearing to embrace the victim’s role, the protester raised his shirt and showed the camera six beanbag shot wounds.

Elijah asked if the police asked the protesters to vacate the area surrounding the federal courthouse? The protester claimed that the police tried to “snatch” him.

What happened next was priceless. Elijah dropped the hammer and asked the protester if he was involved with starting the fire set outside the federal courthouse.

“Were you the same guy that was involved with starting the fire, too?” Elijah asked.

Starting a Fire is Not Peacefully Protesting

Elijah Schaffer interviews a protestor after he was pushed back by the feds. The protester alleges that the feds shot at him for just peacefully…

Subscribe to Elijah’s “Slightly Offens*ve” channel on YouTube for FREE access to his man-on-the-street interviews, protest coverage and more craziness that happens everyday in the USA

Levin: This ONE program would change the abortion debate FOREVER
MSM Pushes Video Game Developers To Support Abortion
Democrat Eric Swalwell gets slapped down for trying to pin church shooting on Republicans
New York City Mayor Eric Adams states his support for abortion up until the moment of birth
Latino Media BURY Terrorist Firebombing of Pro-Life Organization in Wisconsin