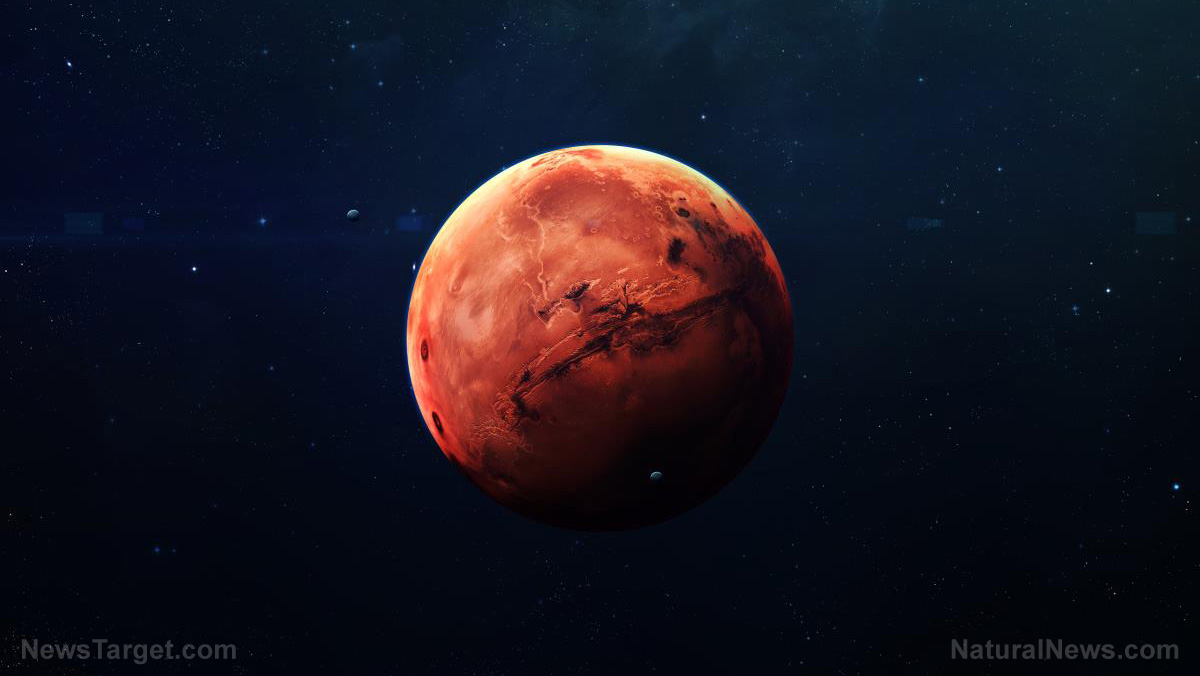 (Natural News)
The spacecraft Mars Express from the European Space Agency (ESA) captured images on July 17 and 19 that show a mysterious cloud about 1,110 miles long hovering over the volcano Arsia Mons in Mars.

Scientists said that it previously appeared in the same spot in 2018, as well as at least three more occasions before. The cloud is dubbed the “Arsia Mons Elongated Cloud,” or AMEC, and its reappearance this year did not entirely surprise scientists.

“We have been investigating this intriguing phenomenon and were expecting to see such a cloud form around now,” said Jorge Hernandez-Bernal of the University of the Basque Country in Spain, who is leading an ongoing study on the cloud.

Back in 2018, the Mars Express captured a cloud hovering over Arsia Mons as massive as the one seen today. ESA scientists began tracking the cloud around September that year, which remained in place in the following October.

In fact, ESA scientists confirmed that the cloud is not linked to volcanic activity. Instead, the cloud made of water ice is created by airflow and is influenced by the leeward slope of the volcano – the side that does not face the wind. This cloud is called an orographic or lee cloud that changes over the course of the day as atmospheric patterns on Mars change.

In the months leading up to the solstice, most cloud activity dissipates over big volcanoes like Arsia Mons. Throughout the rest of the martian year, however, clouds enshroud the summit of the volcanoes.

But ESA scientists observed that, during this season, a seasonally recurrent water ice cloud forms along the southwest flank of Arsia Mons. Mars Express and other missions also observed these water ice clouds in 2009, 2012 and 2015. (Related: Mysterious weather clouds appear on Mars: What is NASA not telling us?.)

In a statement for this year’s sighting, the ESA team concluded that AMEC forms every martian year, which is equivalent to about 687 Earth days, during this season leading up to the southern solstice. The cloud recurs for 80 days or more after a rapid daily cycle: In the early mornings during the southern solstice, it grows for about three hours before quickly disappearing again just a few hours later.

Most spacecraft miss the mysterious cloud in Mars

Most of the spacecraft orbiting Mars tend to observe in the afternoon. But according to Eleni Ravanis, one of those remotely operating the Visual Monitoring Camera that captured the images, the entirety of the cloud cannot be seen by observing during the afternoon. She added that a camera that has a narrow field of view doesn’t provide a fuller picture of the extensive cloud either.

But Mars Express is in a good position to capture AMEC.

“Luckily for Mars Express, the highly elliptical orbit of the spacecraft, coupled with the wide field of view of the VMC instrument, lets us take pictures covering a wide area of the planet in the early morning. That means we can catch it,” explained Ravanis.

Still, there are a lot of questions left unanswered. The scientists are uncertain if the clouds that form during the period are always as extensive as AMEC. They also wonder how long the cloud has been disappearing and reappearing, and why it only forms in the early morning.

They hope that their ongoing investigation will unlock the mystery behind the massive cloud.

Space.news has more on the latest developments on Mars exploration.

‘Do not vote for the worst Mom ever’: Florida state Sen. Kelli Stargel’s daughter wants to tank her mom’s bid for US Congress
Deace: American sovereignty is about to be overruled by the World Health Organization. For your own good, of course.
Fearless: NBA legend John Stockton assists Jan. 6 protester
Obama faces backlash for ‘one of the worst tweets in history’ invoking George Floyd, Uvalde school massacre
Mitt Romney Calls on NATO to Prepare for Nuclear Strike from Russia