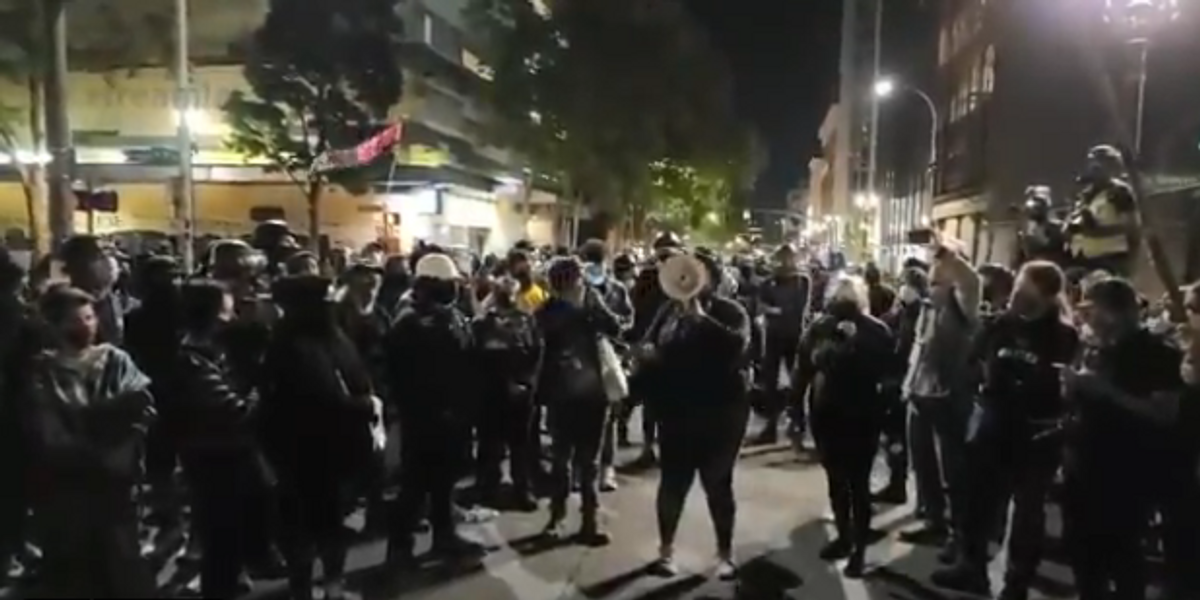 A man was shot dead in Portland on Saturday night, and a group appeared to celebrate the death.

Tensions flared in Portland when pro-Trump demonstrators held a rally where they showed support for the president with a caravan through Oregon’s largest city. There were several stormy clashes between the pro-Trump supporters and counterprotesters throughout the day.

Trump supporters were fending off attacks on the street from Antifa in Portland. The purported shooter is seen stan… https://t.co/lxEI9ExDcJ

Footage shows a man being shot. The victim was wearing a hat with the insignia of Patriot Prayer, a right-wing group based out of Washington. The man who was shot also had a side satchel with a Blue Lives Matter patch on it.

It is not known if the shooting had any connection to the pro-Trump caravan.

Following the deadly shooting, a crowd dressed in all black appears to be celebrating the news of the man being killed.

“And tonight I just got word, the person who died was a Patriot Prayer person,” a woman with a megaphone shouts. “He was a f***ing Nazi. Our community held it’s own and took out the trash. I’m not going to shed any tears over a Nazi.”

The crowd then cheered.

“He was a f—ing Nazi! Our community held its own.”

Antifa & BLM in Portland celebrate the homicide of a purported… https://t.co/VmAHFWs4mi

Listen to these insane leftists cheer that a Trump voter was murdered tonight in Portland. This is absolutely sick. https://t.co/7e8BJpedi1

A few hours after the man was shot to death, protesters were dancing and apparently, “the energy here is joyous now.”

The energy here is joyous now. Dancing, chanting, an American flag burns, and this dude has a dope sign.… https://t.co/t79TloMQYh

Antifa burn a US flag to celebrate the death of the man shot in downtown Portland. They call him a “fascist” despit… https://t.co/ombpbxymoy

The identity of the shooting victim has not been released, and Portland Police have not released the name of the suspect.

“I can’t say much right now. All I can do is verify that he was a good friend and a supporter of Patriot Prayer,” Gibson said, according to USA Today.

Patriot Prayer describes its organization as “using the power of love and prayer to fight the corruption both in the government and citizen levels that seek to gain power through division and deception.” Patriot Prayer has participated in pro-Trump rallies since at least 2017, according to the Star Tribune.

“If anyone can provide information about this case, I ask them to please reach out to our detectives,” Police Chief Chuck Lovell said. “This violence is completely unacceptable and we are working diligently to find and apprehend the individual or individuals responsible.”