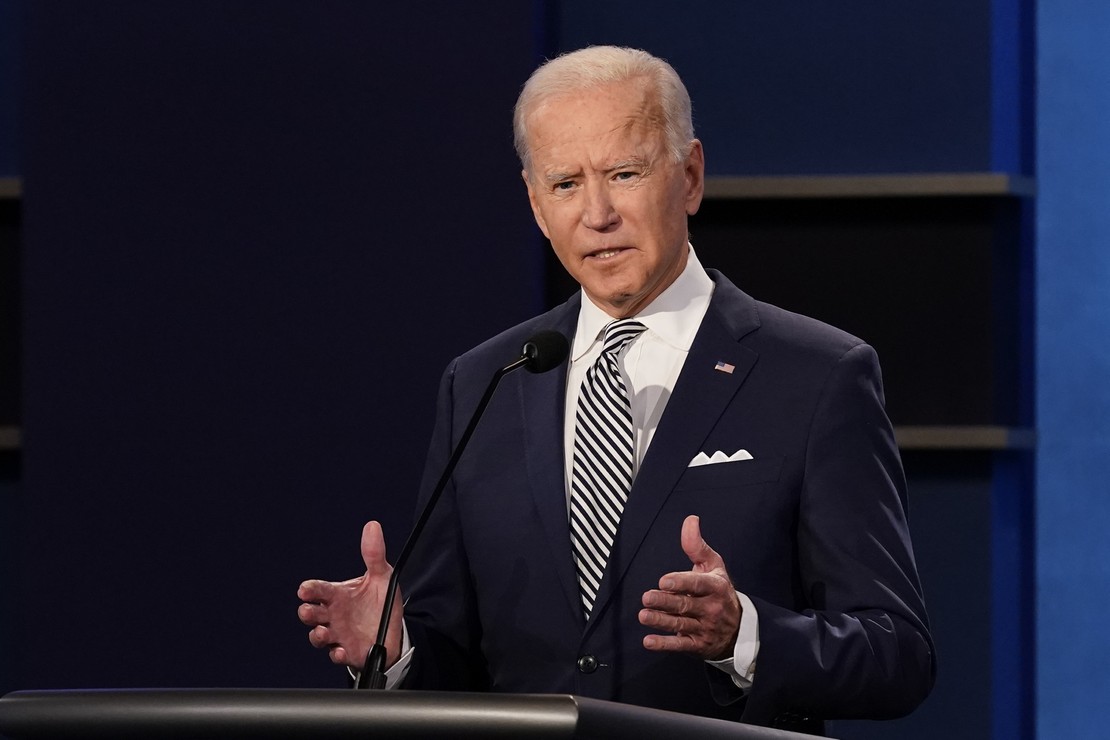 One of the most revealing moments of last night’s debate was one that most people probably missed. Buzzfeed’s Hamed Aleaziz was overjoyed, tweeting that it was “a historic moment in America.” Over at Slate, Aymenn Ismail added that “as terrible as this debate night was, at least a few of us had this moment.”

This glorious occasion came when Donald Trump stated that he would eventually release his tax returns: “I’ve paid millions of dollars, and you’ll get to see it.” Joe Biden responded: “When? Inshallah,” using Arabic for “God willing,” a phrase that is often used in the context of procrastination.

Some Muslims were excited about Biden’s colloquial use of the phrase, so as to mean “This is not likely to happen.” “Interfaith and anti-racism educator” Hind Makki tweeted: “Whenever someone who’s not Muslim drops an inshallah in conversation, I assume they have Muslim colleagues. When they know to use it colloquially [sarcastically], I know they have close Muslim friends.”

These were just the sort of reactions Biden was doubtless hoping for. Arabic-speaking Christians as well as Muslims say “Inshallah,” but in saying this, Biden was not pandering to Arabic-speaking Christians; he was pandering to the part of his base (Muslim and non-Muslim) that believes that counterterror efforts are largely just an exercise in “Islamophobia” and supports the likes of Ilhan Omar and Rashida Tlaib. With the world watching, Biden was demonstrating his support for the Left’s favored religion, Islam. He wouldn’t have said the phrase in English, “God willing,” because his point was not primarily to emphasize that Trump was going to procrastinate in releasing his tax returns; it was to show in a concise, albeit indirect fashion that he was a worthy candidate of the anti-American hard left, a reliable foe of the alleged “Muslim ban,” and a fervent proponent of mass migration.

For Biden has to earn the love of the increasingly dominant hard-left wing of his party. Trump several times last night maneuvered Biden into repudiating pet causes of the far left, notably the Green New Deal, for which Biden affirms support on his own website. This is likely to cause him some difficulty with the most radical of his supporters, for they have already made clear that they’ve got the Democratic nominee on a short leash.

The notorious anti-Semite and former Women’s March leader Linda Sarsour made that clear in July when she declared “I choose Biden” and then immediately began making clear that her support was decidedly conditional: “But I choose him as my opponent in the White House. I want him to defeat Trump so we can mobilize our movements to hold him accountable and push him to do and be better. We can’t do that with Trump.”

Biden may have been trying to relieve some of this pressure and win more of the confidence of the far-left by making use of this expression that is common among the adherents of the religion that leftists love most, but it didn’t work with everyone. Journalist Tamer El-Ghobashy huffed: “Biden’s use of inshallah was kinda colonial and derogatory if you ask me.” El-Ghobashy added: “The sarcasm of it reminded me of every mid-level state department dweeb I ever met in Iraq.”

Poor old Joe. What does he have to do or say to allay suspicions that he will not be a faithful servant of the socialist, internationalist, pro-migration, anti-counterterror agenda? His repudiation of the Green New Deal and more last night will not help him with the adherents of that agenda, but they likely understand that Joe was simply saying what he had to say to get out of the corner Trump had backed him into.

They understand, after all, the helpful principle enunciated by that master politician, Muhammad, the prophet of Islam: “War is deceit.” Joe Biden very clearly has grasped that principle as well.

Editor’s Note: Want to support PJ Media so we can continue telling the truth about the Biden-Harris campaign? Join PJ Media VIP TODAY and use the promo code LAWANDORDER to get 25% off your VIP membership.

Robert Spencer is the director of Jihad Watch and a Shillman Fellow at the David Horowitz Freedom Center. He is author of 21 books, including the New York Times bestsellers The Politically Incorrect Guide to Islam (and the Crusades) and The Truth About Muhammad. His latest book is Rating America’s Presidents: An America-First Look at Who Is Best, Who Is Overrated, and Who Was An Absolute Disaster. Follow him on Twitter here. Like him on Facebook here.

The Jihad Plot Against New York City You Heard Nothing About