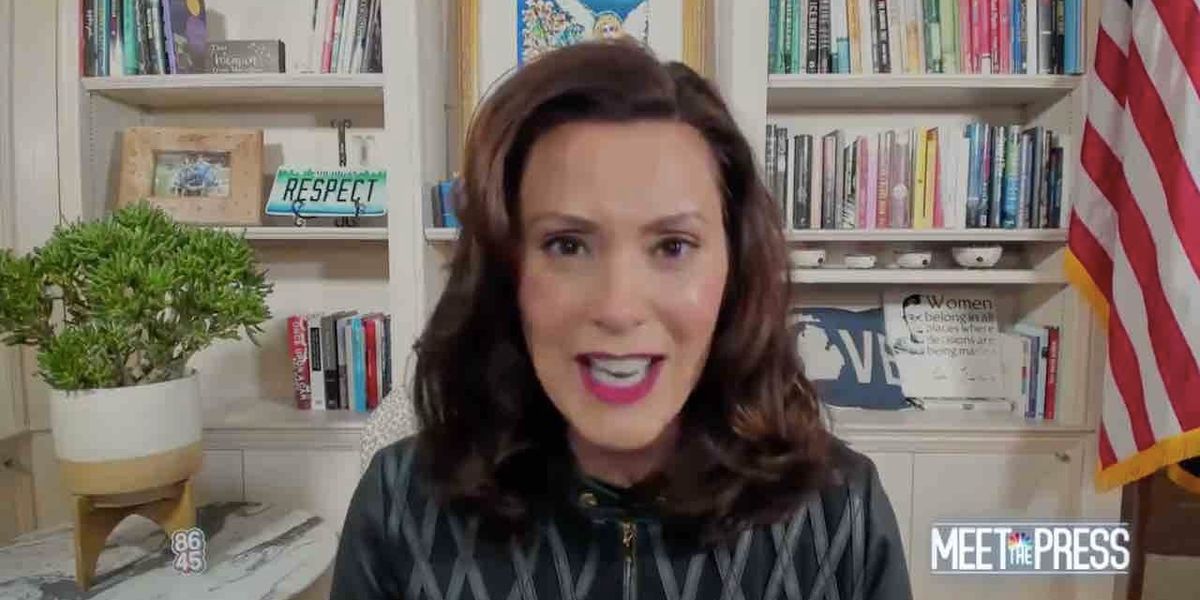 Michigan Democratic Gov. Gretchen Whitmer said that if Americans are weary of coronavirus lockdowns and the fallout from socioeconomic restrictions related to the pandemic, they should vote for Democratic presidential nominee Joe Biden on Election Day instead of President Donald Trump.

“If you’re tired of lockdowns, or you’re tired of wearing masks, or you wish you were in church this morning or watching college football or your kids were in-person instruction, it is time for change in this country, and that’s why we’ve got to elect Joe Biden,” Whitmer told Chuck Todd on “Meet the Press” Sunday.

What else did Whitmer say?

Whitmer blasted Trump during the interview, accusing the president of inciting violence and not doing his job.

“The Trump virus response is the worst in the globe — I mean, in the world it’s the worst,” she said. “Eight million people have contracted COVID-19, 220,000 dead. We’ve got people in food pantry lines who never would have imagined that they’d be there. And no light on the horizon because our numbers keep going up. This is a gravely serious moment for all of us.”

Some Twitter users who commented on the “Meet the Press” clip said Whitmer’s insistence on Americans voting for Biden if they want lockdowns to end and if they want to go back to church sounded like a thinly veiled ultimatum:

In part of her interview not shown on the above video, Whitmer said Trump is inciting “domestic terrorism” due to “lock her up” chants at his Michigan rally Saturday night, the Associated Press said, and that his words are “incredibly disturbing.”

“The president is at it again and inspiring and incentivizing and inciting this kind of domestic terrorism,” Whitmer told “Meet the Press,” according to the AP. “It is wrong. It’s got to end. It is dangerous, not just for me and my family, but for public servants everywhere who are doing their jobs and trying to protect their fellow Americans. People of good will on both sides of the aisle need to step up and call this out and bring the heat down.”

Earlier this month she accused Trump of being “complicit” with “hate groups” — not unlike the group federal authorities arrested for allegedly plotting to kidnap her and overthrow the state government.

Also this month Michigan’s attorney general indicated she would no longer enforce Whitmer’s executive orders on the coronavirus after the state Supreme Court ruled the emergency powers that the governor seized were unconstitutional — a ruling Whitmer was not happy with, to say the least.