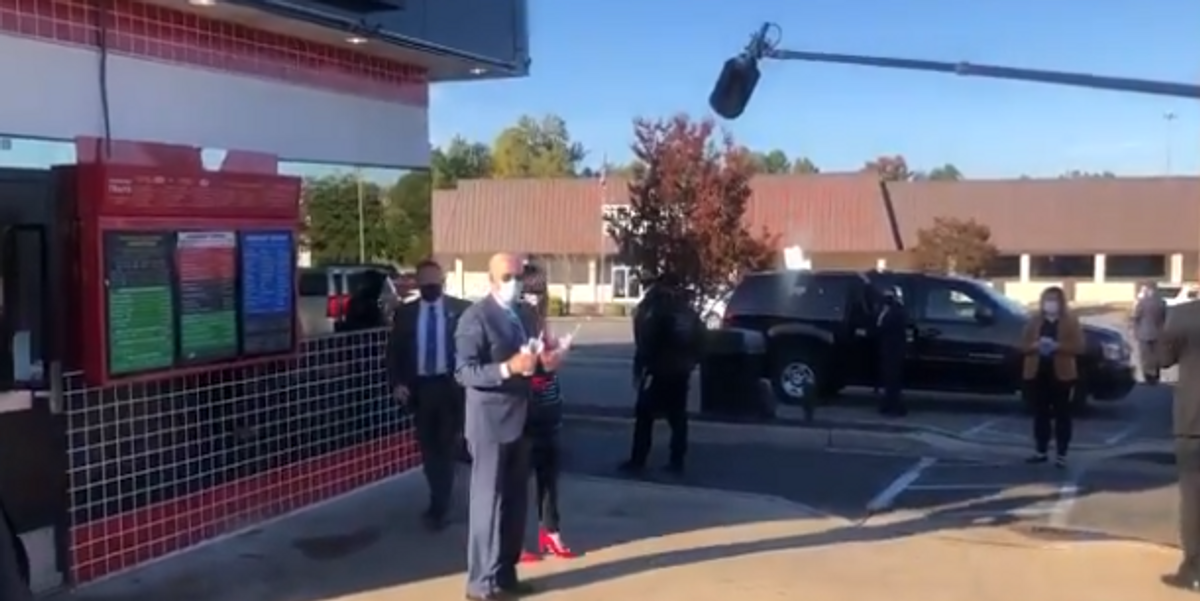 With 16 days until the election, and so many unanswered questions surrounding Joe Biden’s campaign, the media asked the Democratic presidential nominee the critical question of: “What flavor milkshake did you get?” That was the pivotal query that the press decided to ask the possible next president with a little over two weeks until the election.

The media were presented with an opportunity to ask Biden a question regarding his campaign on Sunday. The press could have asked if he is in favor of court-packing or asked about his response to the allegations of Hunter Biden’s overseas dealings, which one report links the former vice president to. Possibly fearing being attacked by Biden for asking any questions about the New York Post’s bombshell report like CBS News’ Bo Erickson did, the press decided to ask Joe about his milkshake.

On Sunday, Biden made a stop in Durham, North Carolina, where he visited the fast-food chain Cookout. Biden and his granddaughter Finnegan ordered milkshakes from the North Carolina-based burger joint.

As Biden walked away with his frosty treats, a reporter shouted, “Mr. Biden! Mr. Biden! What flavor did you get?”

Joe Biden and granddaughter, Finnegan, get milkshakes at Cookout in Durham, NC https://t.co/o4B8ziU7H9

“There has never been a presidential candidate less scrutinized that the 2020 Democratic nominee,” Concha said. “And this is after political media screaming about transparency for the past four years. You either hold the powerful or potentially accountable or you don’t.”

New York Magazine and HuffPost contributor Yashar Ali tweeted, “‘What flavor did you get?’ – you don’t need to ask the candidate this question. Find out from staff. Two weeks out, a party nominee should be asked more substantive questions. This isn’t the first Iowa trip!”

The question about Biden’s milkshake somehow became even worse when CBS political correspondent Ed O’Keefe reported that the candidate would likely call a lid until Thursday’s presidential debate in Nashville.

“This week is mostly about debate prep,” O’Keefe said Sunday on “Face the Nation.” “He will not be seen again after today until Thursday night in Nashville at that next debate. So they’re going to keep him focused on that. That’s a signal that they believe this is still a very big opportunity for them to provide one last contrast with the president and they have to prepare him for potential attacks from the president.”

With a little over two weeks until #electionday, what strategy does the @joebiden campaign take in the final days o… https://t.co/BNrVkEtCXd

On Friday, Biden had a sparsely attended rally in Detroit, where he relied on a huge teleprompter through much of his speech.