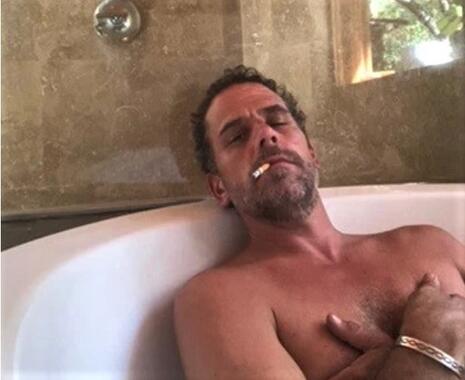 A quick search of NPR transcripts in Nexis shows only one segment on Hunter Biden since the New York Post stories broke… and that was anti-Trump! The online headline:

On Friday’s Morning Edition, host Rachel Martin began the Trump-shaming: “Joe Biden’s son Hunter has acknowledged his struggles with alcohol and cocaine abuse. President Trump has lashed out against him because of it. That kind of public attack can add to shame and isolation for people suffering addiction. NPR’s Brian Mann has more.”

Mann quoted Trump from the first debate, saying Hunter was “dishonorably discharged,” and Mann rebutted: ”That’s factually wrong. Hunter Biden received an administrative discharge, not a dishonorable designation, from the Navy Reserve after he tested positive for cocaine in 2014. He’s spoken openly about his struggle with addiction, telling The New Yorker magazine last year, it’s like a darkness.”

Sadly for Mann, he was factually wrong. Hunter tested positive for cocaine in June of 2013, but for some reason wasn’t discharged until February 2014. One can guess his family was involved in how the discharge would be categorized.

Trump was also heard saying “He made a fortune, and he didn’t have a job.” They didn’t fact-check that part. There was NOTHING in the NPR story on Hunter’s business dealings in China and Ukraine. It was all pretending Trump was just whipping on a private citizen with a drug problem.

BRIAN MANN: After the debate, President Trump’s son, Donald Jr., doubled down on the attack, calling Hunter Biden a crackhead during an appearance on Glenn Beck’s right-wing talk show.

MANN: Eric Garcia is a journalist, himself in recovery from alcohol and sex addiction. He wrote about the attacks on Hunter Biden in The Washington Post, arguing the president is legitimizing the use of a disease as a political weapon.

So Hunter Biden’s behavior is not a “character defect,” but attacking him is. Mann is a full-time reporter on addiction on NPR, and it’s personal: ”I lost my father and my step-brother to substance abuse. I’m excited by the challenge of breaking down some of the stigma around this part of our lives and helping people talk about addiction more factually.” That tilt comes through in the next soundbites, about suicides caused by shame:

MANN: Experts say stigma can be a life-or-death issue for the 20 million Americans who suffer addiction. According to the National Institutes of Health, 75 percent of those people never get help. Research suggests shame and stigma play a big part in that.

GARY MENDELL: Words change the way that we perceive those with this disease.

MANN: Gary Mendell heads a national addiction recovery program called Shatterproof. He says the kind of stigma reinforced by these political attacks on Hunter Biden will leave more people reluctant to get help. He lost his son to addiction in 2011. Brian Mendell was 25 when he died by suicide after wrestling with his own shame.

MENDELL: I’ve never had to wonder because he wrote about it in a note to me. He talked about not being looked at as normal (crying).

So the Trumps are so cruel, they make the fathers of dead addicts cry. Mann concluded his very one-sided lecture:

MANN: Addiction is now understood by scientists and health care providers as a treatable illness. But Mendell says that’s only possible if people like his son feel safe getting care.

MENDELL: He lost hope that he could live in a world where, as a young man, he could develop a disease, get science-based care in a health care system, get better and live a full and fulfilling life, managing a chronic illness — no different than someone with diabetes.

Wow, that really is trying to “break down the stigma”!

Perhaps the taxpayers who fund this emotional propaganda should contact NPR public editor Kelly McBride about the potential conflict of putting a reporter who’s lost family members to addiction on a politically sensitive story like this right before an election — especially if he leaves out all of the other elements of the Hunter Biden story.