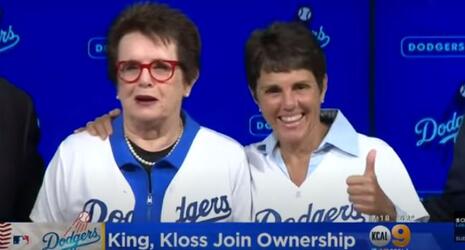 Baseball’s World Series is no longer just the Fall Classic as it’s always been known. This year’s match-up should instead be judged as one of two “exemplary LGBTQ-friendly teams,” says SB Nation Outsports writer Ken Schultz. The fans of both teams are winners because both franchises are aggressively catering to their respective LGBTQ fan bases and communities.

Schultz introduces his alphabet-friendly puff piece by writing, “The 2020 World Series has come down to the two best teams in baseball: the Los Angeles Dodgers and Tampa Bay Rays. Happily, that’s not just on the field. As each team’s recent history demonstrates, the Dodgers and Rays are both top-of-the-line franchises when it comes to uplifting their respective LGBTQ fan bases and communities.”

Awarding LGBTQ alphabet points to each team in separate break-downs, Schultz began with the Dodgers. And he does not dwell on L.A.’s mighty pitcher Clayton Kershaw or sluggers Mookie Betts and Cody Bellinger. Not when the Dodgers’ outreach to the LGBTQ community is so deep and talented. It’s a model for the rest of MLB, Schultz relates.

The Dodgers were one of the first baseball teams succumbing to pressure to feature Pride Nights, hosting what is believed to be the first Gay and Lesbian Night in August of 2000.

Credit for the genius of the Dodgers Pride Night goes to L.A.’s homosexual Senior Vice President Eric Braverman. He made the promotion a showcase to roll out the red carpet in honor of its LGBTQ fan base, including out-of-the-closet celebrities like Glee’s Dot Marie Jones, Olympian Gus Kenworthy and others. Los Angeles shattered a major league record — not for any hitting or pitching hallmarks — but by selling 12,000 Pride Night ticket packages in 2019. Cooperstown, did you catch that?

Schultz raves about the Dodgers’ activism going well beyond an annual Pride Night. They’ve sponsored the last two Outsports Pride events, and last week they invited homosexual and former outfielder Billy Bean, current vice president and special assistant to the commissioner, to speak to their front office on Spirit Day.

Ring up those alphabet points, but there’s more where all that came from! In 2018, the Dodgers “made the LGBTQ equivalent of the Mookie Betts trade” by adding lesbian former tennis great Billie Jean King (at left in above photo) and her partner Ilana Kloss (at right in photo) as minority owners. 40,000 lucky fans received King bobblehead dolls to celebrate the big event.

The sheer volume of LGBTQ positivity from the Dodgers is downright daunting, Schultz raves.

For the Rays, we can dispense with on-field stars Blake Snell, Tyler Glasnow and Brandon Lowe and focus on the team’s glowing pride record.

Last season, Tampa’s lesbian Mayor Jane Castor, threw out the first pitch at a game. “The Rays also commemorated the 50th anniversary of Stonewall by displaying a special historic exhibit about the riots in conjunction with Equality Florida,” Schultz gushed.

In 2015, the Rays were one of the three pro sports teams that signed an amicus brief to the U.S. Supreme Court in favor of marriage equality. That was the year the High Court usurped the legislative process by forcing same-sex marriage on the entire nation. In 2019, the Rays and San Francisco Giants supported an amicus brief in support of LGBTQ rights in the workplace.

Schultz recalls that last year’s World Series was a story of good news/bad news. The winning Washington Nationals were incredibly LGBTQ friendly, but the losing Houston Astros “didn’t even bother to host a Pride Night.”

The Rays and Dodgers both deserve to be celebrated for how they have embraced their LGBTQ fans, Schultz says. “Let’s hope we can keep saying that about every Fall Classic in the future.”