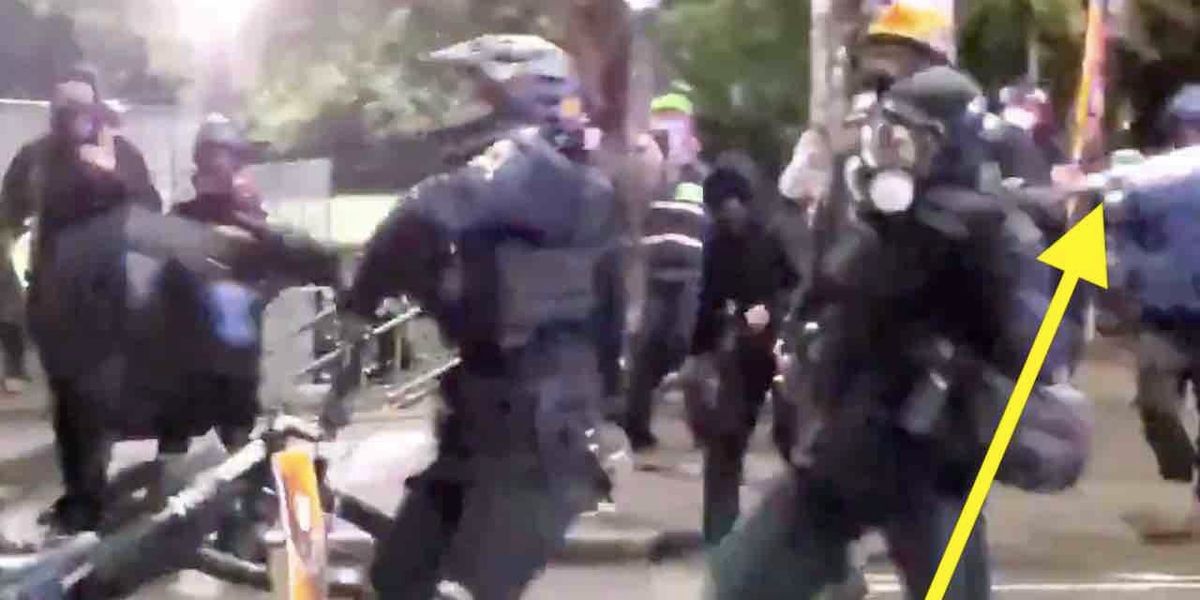 Readers of TheBlaze likely haven’t forgotten about that Antifa-clad rioter caught on video bashing a Seattle police officer in the back of the head with a baseball bat last month.

Black bloc terrorist tries to kill a Seattle police officer by hitting him in the head with a bat. The Council and… https://t.co/3NBk3a2oSA

Well, a suspect’s finally been arrested — and one might say the stuff authorities have on him is as scary and sick as the video of his attack.

Investigators said the charges filed against Greenberg include his alleged participation in setting fires in the city during the unrest as well as using a metal baseball bat to hit a Seattle officer in the head on Sept. 23. Authorities say the force from the blow caused the officer’s helmet to crack.

Turns out he’s also the stepson of former Democratic state representative Laura Ruderman, according to Rantz, who added that she used her political clout to convince a judge to lower the bail on his arson-related charges and release him to her custody.

“He is basically a good kid, straight ‘A’ student,” Ruderman said. “I’ve served the state in the legislature; we will make sure he follows all the provision[s].”

More from his KTTH piece:

The conversations between the two showed “a high degree of sophistication and planning for their attacks, identifying targets (Seattle Police Officer’s Guild, East Precinct), itemizing the needs for set numbers of Molotov cocktails, calculating expected loss for failed bombs, and where to obtain supplies.”

Greenberg and McMillan allegedly discussed “Molotov cocktail tattoos to memorialize their attacks,” while “sharing news articles of their criminal activities with pride.” Specifically, they said they were “proud of Greenberg” for his assault against the police officer.

They even communicated ways to “destroy evidence of their attack plans.” They obviously failed at that.

During a late September search warrant execution at the home of Greenberg’s parents where he lives, police seized two bats, including one aluminum bat, Rantz wrote, adding that police believe it was the same bat used to assault the officer.

Detectives also uncovered numerous texts to and from Greenberg, including some related to the assault on the officer, Rantz said.

Greenberg allegedly shared a KOMO story that shows the assault against the officer and texted to his friend McMillan, “I AM SO PISSED AT THE COPS!!! I [EXPLETIVE] WENT OFF ON THEM TONIGHT!” and “I’m proud too hehe. Wish he didn’t have a helmet on lol,” Rantz wrote.

Other Greenberg texts included, “And can we like pls slit every SPD throat,” and “I want the whole damn system to just burn the [expletive] down!!! Btw I really like fire,” Rantz said.

The King County Prosecutor’s Office recommended Greenberg’s bail set at $750,000, and a judge agreed, Rantz said, adding that a judge also agreed to $100,000 bail for McMillan.