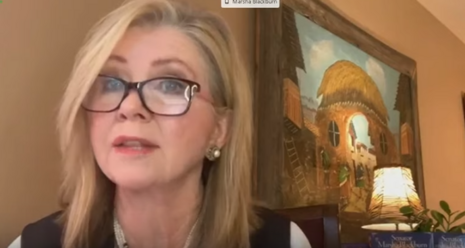 The senator told Twitter CEO Jack Dorsey in the hearing, “You have censored Joe Biden zero times, Mr. Dorsey. You have censored Donald Trump 65 times.” She then reminded him that he had told Sen. Cory Gardner (R-CO) that the Iranian Ayatollah Ali Khamenei’s tweets did not violate Twitter Terms of Service. “Who elected the Ayatollah?” asked Blackburn.

Dorsey responded in the affirmative. The senator added, “So it would be important for world leaders to have access to your platform, correct?” After Dorsey agreed, she said, “Why do you deny that platform via censorship to the U.S. president?”

The Twitter CEO denied it, saying “We haven’t censored the U.S. president.”

Dorsey answered, “We have labeled tweets from world leaders. We have a policy of not taking down the content but simply adding more context around it.”

Blackburn said, “Ok, and the U.S. president you have censored 65 times.”

Even though Dorsey denied any censorship, the tweets in question that were labeled are also disabled from interaction. Users may not comment or like on these labeled tweets.

The Media Research Center found that Donald Trump and his campaign had been censored by Twitter and Facebook a grand total of 65 times.

Conservatives are under attack. Contact your representative and demand that Big Tech be held to account to mirror the First Amendment while providing transparency, clarity on “hate speech” and equal footing for conservatives. If you have been censored, contact us at the Media Research Center contact form, and help us hold Big Tech accountable.