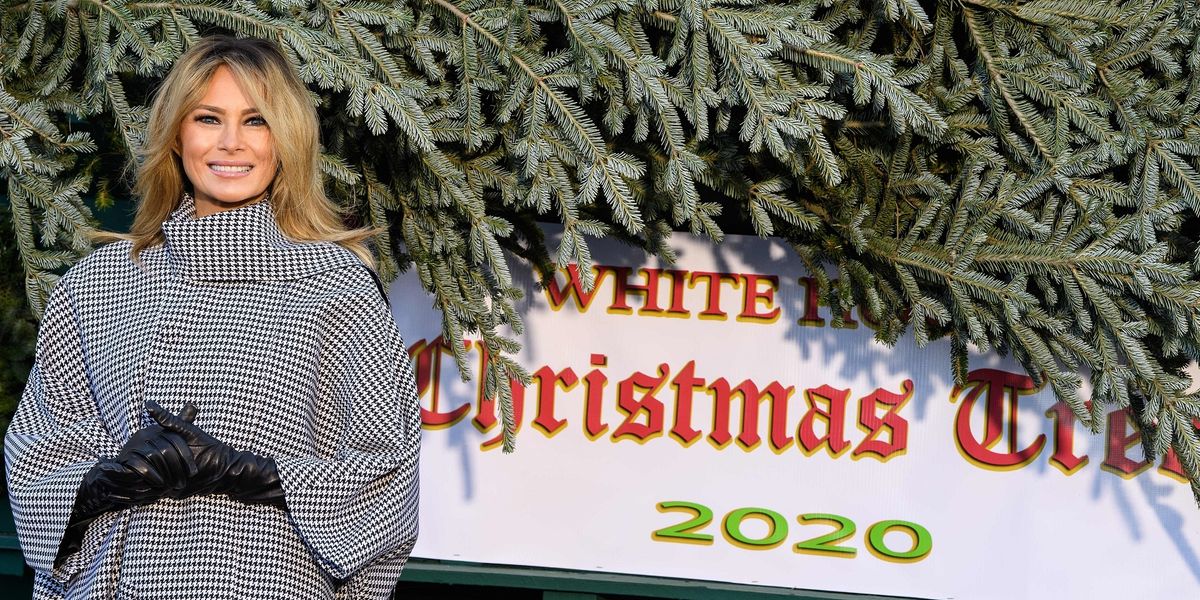 “Today I welcomed the arrival of the beautiful @WhiteHouse Christmas Tree!” the first lady tweeted. “We are excited to begin decorating the People’s House for the holiday season!

Today I welcomed the arrival of the beautiful @WhiteHouse Christmas Tree! We are excited to begin decorating the Pe… https://t.co/WigyZGZGkp

WPRI-TV reported that the Fraser fir is nearly 20 feet tall, and came from a West Virginia tree farm owned by Dan and Anne Taylor, who won this year’s National Christmas Tree Association’s Grand Champion Grower Award. The tree arrived at the White House in a horse-drawn carriage, pulled by two Clydesdales named Winston and Bud while a military band played “Hark the Herald Angels Sing” and “O Tannenbaum.”

The first lady accepted the tree’s arrival at the north portico.

According to the New York Post, Mrs. Trump told reporters “Merry Christmas” in response to their “shouted questions about how the president is doing.”

The White House will move forward with hosting holiday gatherings this year, but with added precautions because of the coronavirus pandemic.

Stephanie Grisham, Mrs. Trump’s spokeswoman and chief of staff, told NBC News, “Attending the parties will be a very personal choice. It is a longstanding tradition for people to visit and enjoy the cheer and iconic décor of the annual White House Christmas celebrations.”

Grisham said that guest lists will be smaller than in previous years, and that mask-wearing will be required.

The decision to move forward with indoor events and other gatherings comes as the Centers for Disease Control and Prevention, top White House advisers and public health professionals across the nation have been pleading with Americans not to travel for Thanksgiving or spend the holiday with people from outside of their households.

The arrival of the White House Christmas tree kicked off the holiday season, just a few days before Thanksgiving.

On Tuesday, President Donald Trump is set to pardon two turkeys named Corn and Cob during the traditional White House ceremony. As of Monday, the lucky birds were staying in the nearby luxurious Willard International Hotel.

WUSA-TV reported that the “poultry duo rolled up in a chauffeured car and walked a red carpet to the entrance of the Willard Hotel. They were escorted into their suite where, they too, jumped on the bed.”