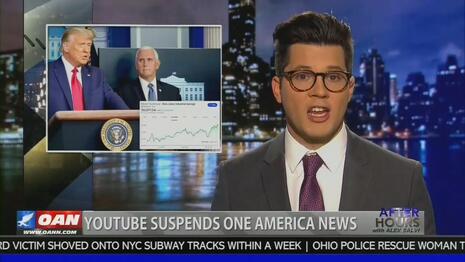 YouTube is now attacking entire news channels such as One America News Network (OAN) for “misinformation.”

“YouTube has barred One America News Network from posting new videos for a week and stripped it of its ability to make money off existing content,” Axios reported on Tuesday. A YouTube spokesperson had reportedly explained to the outlet that OAN had been punished for uploading a video promoting a false cure for the COVID-19 virus.

Axios explained further that this one-week suspension from releasing new videos or livestreams is the result of a “strike” issued by YouTube. The “strike” was issued for violating YouTube’s COVID-19 misinformation policy which “prohibits saying there is a guaranteed cure to the virus” Axios explained.

OAN anchor Alex Salvi quoted a response on behalf of the organization, blasting YouTube for “the extreme action of censoring a national cable news network for a video that was ‘unlisted’ and not available publicly on YouTube.” A second part of the statement declared: “Although OAN will abide by YouTube’s requirements for any video made available on YouTube, OAN will not let YouTube’s arbitrary rules infringe upon its First Amendment editorial rights to inform the public.”

Axios recalled that the suspension is one of many ways in which YouTube is actively undermining OAN as a news organization:

“Moreover, because the current president has not committed to a peaceful transition of power, misinformation and manipulated media content on your platform may fuel civil unrest.”

“On Monday, cable outlet One America News Network posted two videos to its YouTube account titled ‘Trump won,’” Bloomberg reported. The article went on to suggest that these videos are “falsely” claiming that “U.S. President Donald Trump was re-elected and that the vote was marred by fraud.” Bloombeg’s objection was that YouTube merely “added a label noting that the Associated Press called the election for Joe Biden” rather than “block[ing] or remov[ing] the content.”

OAN produced two videos from Bobb on Nov. 9 using the phrase “Trump won” in the title. Each discussed ballot problems ranging from accusing Democrats of making a play to “steal the presidency” via ballot fraud to claiming news organizations called election results early to “breathe life into the Biden campaign.”

Conservatives are under attack. Contact Google at 1-650-253-0000 and demand that the platform provide transparency: Companies need to design open systems so that they can be held accountable, while giving weight to privacy concerns. If you have been censored, contact us at the Media Research Center contact form, and help us hold Big Tech accountable.