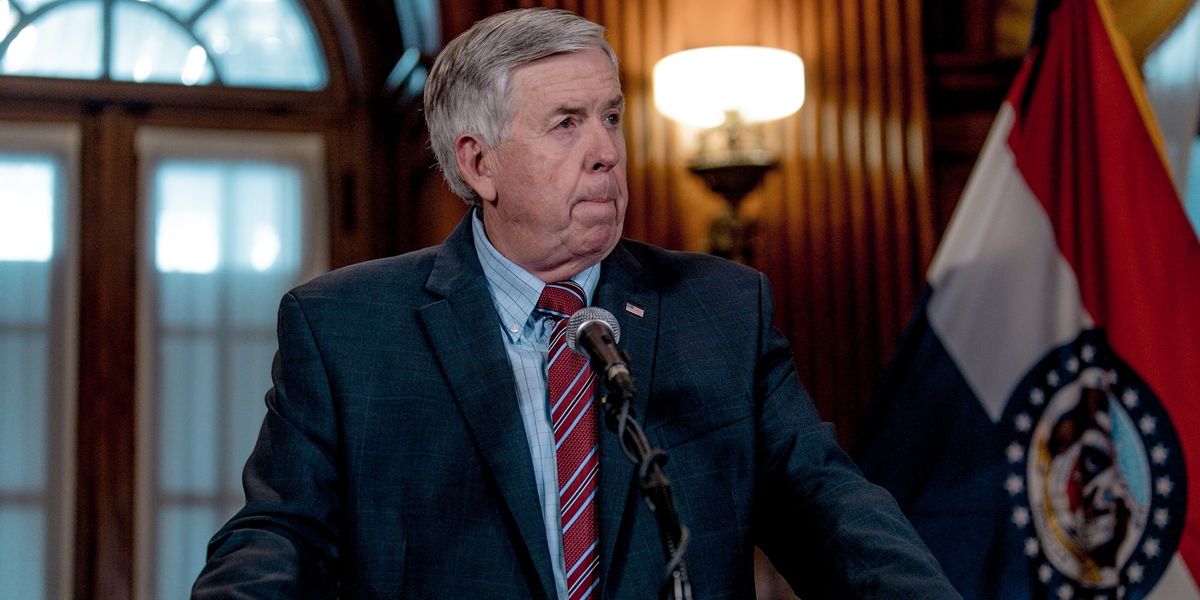 Like other leaders across the U.S., Missouri Gov. Mike Parson (R) reminded his constituents ahead of the Thanksgiving Day to be cautious about COVID-19. But instead of handing down government dictates ahead of the festivities, Parson did just the opposite: he reminded Missourians of their rights, and vowed not to step on them.

The holidays are coming, and as the Governor of the State of Missouri, I am not going to mandate who goes in the fr… https://t.co/06NiLvfWuP

Parson told the citizens of the Show-Me state, “Ultimately, we each must take responsibility for our actions,” and issued the longstanding recommendation that folks practice social distancing, wear masks, and wash their hands to stave off the virus. He also suggested that people “host outdoor activities rather than indoor activities as much as possible” and pointed to further guidance from the state’s health department.

The Republican’s promise not to “mandate who goes in the front door” of citizens’ homes is in stark contrast to the messages being sent from jurisdictions across the U.S., where leaders have issued decrees on how many people may gather in private residences, and even how many separate households guests can hail from.

Parson’s view on such laws might have to do with his former career as a sheriff, which falls in line with law enforcement officers nationwide who have publicly refused to enforce measures regulating people’s party plans.

New York Gov. Andrew Cuomo (D), for instance, issued an executive order earlier this month limiting New York residents to only 10 people gathering together in a home. Within days, several upstate sheriffs stated outright that they would not enforce such a mandate, calling it unconstitutional.

Fulton County Sheriff Richard Giardino told CNN of Cuomo, “I don’t think the Constitution allows for the infringement on the number of people in your own home. He has authority to do a lot but not to tell law enforcement to get into someone’s house and count who is there.”

California Gov. Gavin Newsom (D) also issued new executive orders ahead of the holidays. As columnist John Phillips described them in the Los Angeles Daily News: “The Warden’s latest Thanksgiving Day guidelines decreed that parties be held outdoors, with guests from no more than three households, seated six feet apart, taking off their masks only to eat and drink, and no one is allowed indoors except to use the bathroom.”

Newsom, of course, was busted breaking his own coronavirus restrictions by attending a lavish birthday dinner for a lobbyist with at least a dozen people inside one of the swankiest restaurants in the country.

California sheriffs pushed back against Newsom’s orders, too. The Sacramento County Sheriff’s Office issued a statement this week declaring outright that they “will not be determining—including entering any home or business—compliance with, or enforcing compliance of, any health or emergency orders related to curfews, staying at home, Thanksgiving or other social gatherings inside or outside the home, maximum occupancy, or mask mandates.”