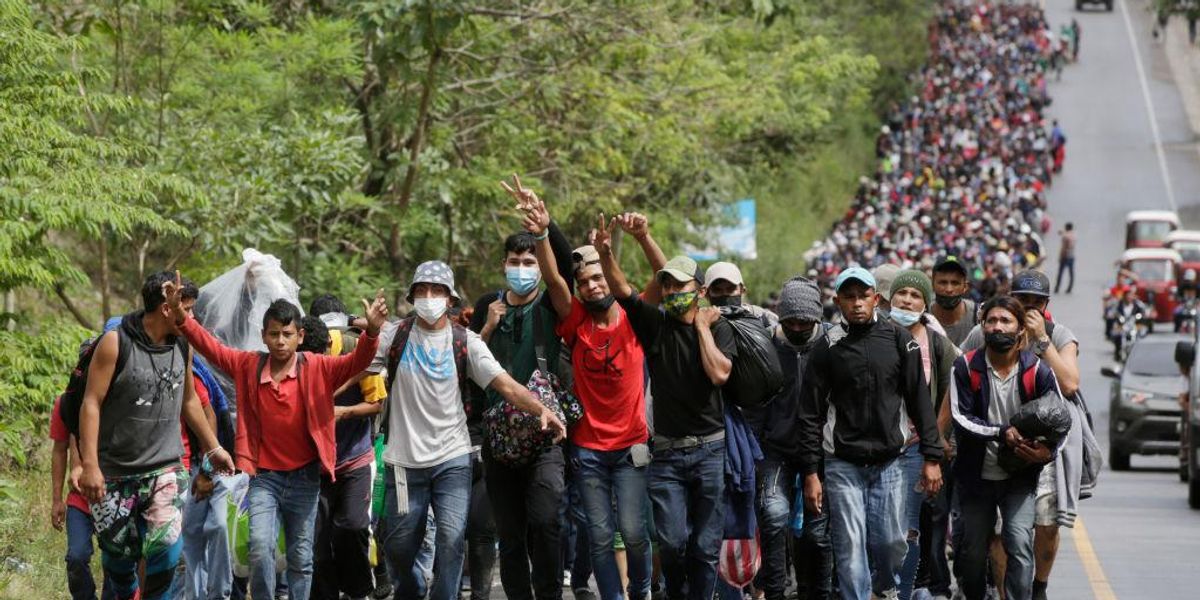 Thousands of migrants from Central America are on their way to the United States, and a migrant activist group representing the caravan is calling for the Biden administration to honor its “commitment.”

As many as 8,000 migrants from Honduras have entered Guatemala since Friday, Guatemala’s immigration authority informed Reuters. Guatemalan authorities said they already had detained hundreds of Honduran migrants from the caravan.

Videos show the massive caravan bust through a wall of law enforcement officers at the Guatemala border.

A group from the Central American migrant caravan forcefully push past border patrol in Guatemala. https://t.co/5ALDRclVPI

3,000 of Hondurans left on Jan 15 to make their way to the United States amid deepening crisis within the country.… https://t.co/5JQLm1kkh5

The migrants are fleeing political corruption, violence, and extreme poverty in Honduras, which was exacerbated by the coronavirus pandemic and two devastating Category 4 hurricanes that battered the country within a two-week span in November.

“We have nothing to feed to our children, and thousands of us were left sleeping on the streets,” mother-of-four Maria Jesus Paz, who lost her home in the hurricanes, said. “This is why we make this decision, even though we know that the journey could cost us our lives.”

The mass migration by Hondurans is happening a week before the inauguration of President-elect Joe Biden. The migrants are expecting that Biden will have a much more welcoming immigration policy compared to President Donald Trump.

Migrant rights group Pueblo Sin Fronteras issued a statement on behalf of the people participating in the first caravan of 2021, Fox News reported.

“We recognize the importance of the incoming Government of the United States having shown a strong commitment to migrants and asylum seekers, which presents an opportunity for the governments of Mexico and Central America to develop policies and a migration management that respect and promote the human rights of the population in mobility,” the statement read. “We will advocate that the Biden government honors its commitments.”

During his presidential campaign run, Biden pledged to end Migrant Protection Protocols on day one of his presidency. The program that was enacted by the Trump administration in January 2019, makes asylum-seekers wait in Mexico during the duration of their immigration court cases.

Biden’s “groundbreaking” immigration reform plan is expected to provide a pathway to citizenship to the estimated 11 million illegal immigrants residing in the United States.

Biden has also promised a moratorium on deportations by Immigration and Customs Enforcement.

“Processing capacity at the border is not like a light that you can just switch on and off,” Rice told Spanish wire service EFE in December. “Migrants and asylum seekers absolutely should not believe those in the region peddling the idea that the border will suddenly be fully open to process everyone on Day 1. It will not.”

“Our priority is to reopen asylum processing at the border consistent with the capacity to do so safely and to protect public health, especially in the context of COVID-19,” Rice said. “This effort will begin immediately but it will take months to develop the capacity that we will need to reopen fully.”

The caravan reaching the U.S. border will depend on how much the Guatemalan and Mexican governments crackdown on the illegal immigrants traveling north toward the U.S.

Acting Customs and Border Protection Commissioner Mark Morgan blamed the incoming administration for the caravan during an appearance on “Fox & Friends.”

“We’re looking at two groups that are well over five thousand. And one of those groups have already gotten through the Guatemala border. And they’re on their way to El Rancho, which is about the located centrally in Guatemala,” Morgan said on Saturday. “It’s coming. It’s already started, just as we promised and anticipated it would with this rhetoric from the new administration on the border.”

Trump issued a warning about the massive amount of illegal immigrants that would swarm the country if his policies are reversed.

“No matter our party, we should all agree on the need to protect our workers, our families, and our citizens of all backgrounds, no matter who they are,” Trump said on Tuesday. “In particular, if our border security measures are reversed, it will trigger a tidal wave of illegal immigration — a wave like you’ve never seen before. And I can tell you that, already, waves are starting to come up from 2,000 and 1,000 and 500 miles away. We see what’s coming.”

Is the Trans Cult Putting the Nation’s Blood Supply at Risk?
The Sad State of MSNBC’s Recycled, Tired Vax Propaganda Targeting Men
We Are Not ‘At the Brink of World War III’ — At Least Not Yet
Old Man Biden Starts Shouting Out of Nowhere During Speech in New York (VIDEO)
CNN’s Bash Asks Schiff, Swalwell & Omar About Their Lies & Chinese Ties