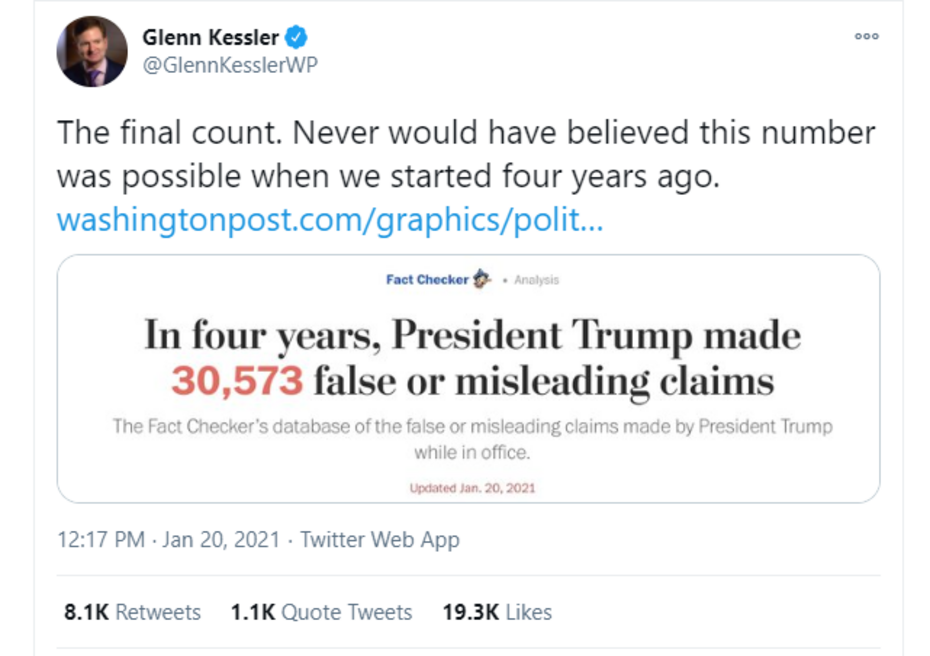 Glenn Kessler and his Washington Post “Fact Checker” squad celebrated their end-of-term count of President Trump’s “false and misleading statements” – 30,573. Their level of aggression clearly increased as the term went on, since they announced on January 21, 2019 they had arrived at 8,158 of those – or 26.7 percent of the four-year total.

Shelby Talcott of the Daily Caller put the Post on the record explaining what we all could expect: there will be no False & Misleading Claims count for President Biden:

Trump’s departure also equals an end to having a false claims project for the current president, as The Post said it does “not have plans to launch a Biden database at this time.” Trump’s database began a month after he became president, The Post’s director of communications Shani George told the Caller.

“The database of Trump claims was started a month after Trump became president as a way to not overwhelm our fact-checking enterprise, where the core mission is to explain complex policy issues,” George said. “While we do not have plans to launch a Biden database at this time, we will continue to dig into the accuracy of statements by political figures of all party affiliations.”

But party affiliation matters: there was no False & Misleading Statements count for Barack Obama, and there wouldn’t have been one if Hillary Clinton won in 2016. Kessler told Jordan Klepper at Comedy Central “In terms of fact checking, Hillary Clinton is like playing chess with a real pro. Fact-checking Donald Trump is like playing checkers [Laughter] with someone that’s not very good at it. It’s pretty boring.” Klepper shot back: “You find Donald Trump boring.” Kessler replied: “Yes! His facts are so easily disproven, there’s no joy in the hunt.”

There is no “hunt” for Democrats. Only admiration for those chess pros!

On January 15, Kessler signaled his new approach in fact-checking Biden’s address on the coronavirus. He boasted that Biden’s team responded to him immediately. That’s because Democrats care about their home-team newspapers, and Biden’s team knew he would be sympathetic. 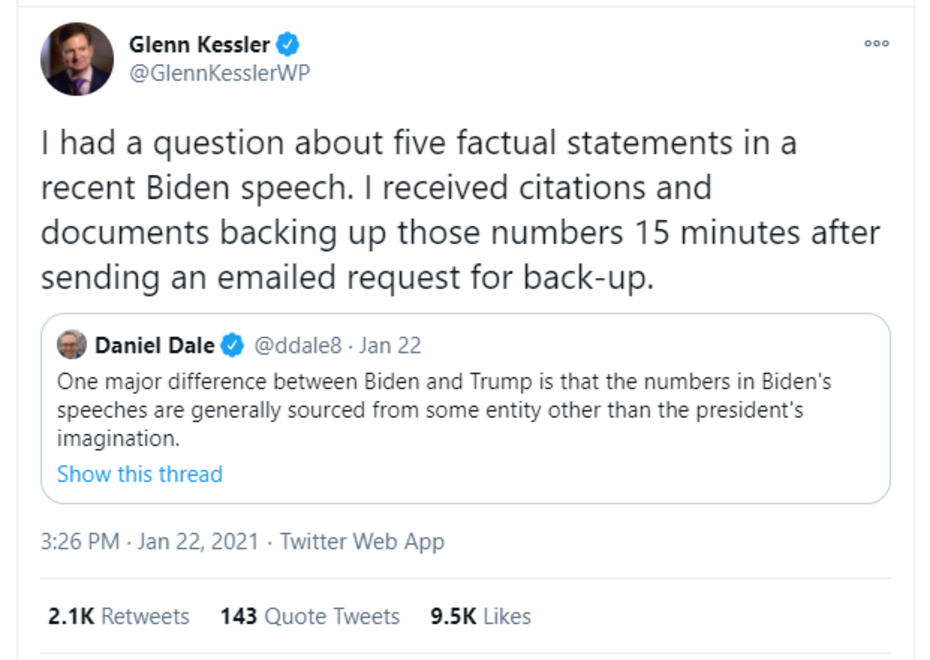 Kessler warmly accepted Biden’s use of liberal think tanks like the Brookings Institution, the Center for Budget and Policy Priorities, and poverty analysts at Columbia University backed by liberal foundations like the Bill & Melinda Gates Foundation. But when Trump used the National Federation of Independent Business for a survey of small business confidence in 2018, Kessler dismissed it as a “conservative group” whose survey didn’t draw enough responses to impress him. “Misleading”!

In a January 16 interview on CNN, Kessler elaborated on how pleased he was with Team Biden:

VICTOR BLACKWELL: Yes. Let me ask you about the president-elect. He made a lot of pretty dramatic claims in his speech on Thursday, Thursday evening. I understand that your team reached out to him and just compare and contrast the reaction and response you got from the incoming administration to what you’ve gotten over the last several years.

GLENN KESSLER: Well, in the case of the Biden-Harris transition team, we asked — we identified five factual statements he made. You know, interesting claims that we wanted to know if they — what was the basis for this. Within 15 minutes, we received citations to those factual statements and they all checked out.

Generally, the Trump White House almost never responded to our queries, because, of course, a lot of what the president said could not be defended or explained in terms of where he got these so- called facts. I assume the Biden — you know, I did five years of Obama, and I assume the Biden presidency will be a lot like the Obama presidency, and that they will be responsive, and will be able to quickly back up what they’re saying. And occasionally, the president will go off- kilter, particularly when he’s, you know, speaking extemporaneously and not following something that previously — has previously been fact-checked.