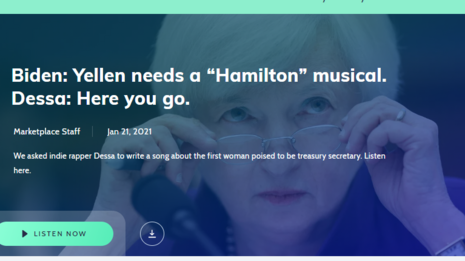 The public-radio business-news show Marketplace has this ongoing love affair with Janet Yellen, Biden’s new Treasury Secretary. When she was nominated in November, host Kai Ryssdal gushed she was the “economic EGOT” — like someone who’s won an Emmy, Grammy, Oscar, and Tony — because she’s already been head of the Federal Reserve and the Council of Economic Advisers. But now the gush has gotten ridiculous — they commissioned a Hamilton-style rap anthem touting Yellen, because Biden suggested it.

When then-President-elect Joe Biden announced his intent to nominate Janet Yellen for secretary of the treasury, he joked that “Hamilton” creator Lin-Manuel Miranda should write a musical about her.

Marketplace asked Dessa, a member of the hip-hop collective Doomtree and one of the artists who contributed to The Hamilton Mixtape, to think about what that might sound like.

Ryssdal gushed over the rap tribute, with the title “Who’s Yellen Now?” He said ”I can’t tell you how much I love this!”

He asked Dessa if she had ever been a student of economic or monetary policy before, and she said no. “I read a lot about her to make sure that she was somebody who I’d like to send up,” she said. “And it was really exciting to become a fan of Janet Yellen.”

“The three of us who worked on this song … I don’t think we’ve ever had so much fun,” Dessa told Ryssdal. “It was like, how do we get out of this normal rap game and into this [cabinet] appointment niche because it was so much fun to write.” 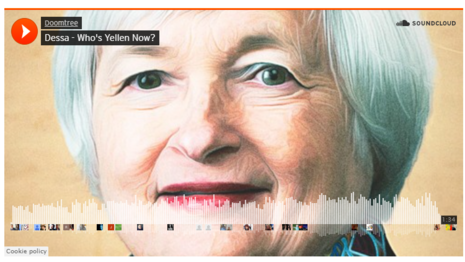 Doves on the left, hawks on the right

But here comes Yellen with that inside voice

She’s 5-foot nothing, but hand to God

She can pop a collar, she can rock a power bob

Damn, Janet, go and get it — Fifth in line for president!

She knows the kinda stimulus it takes to pass a buck

Forgers faking in her treasury

For the nation less disparity

The show gushed the song was available on Spotify, Apple Music, and other streaming services. Listen to the interview and song below:

Marketplace is syndicated to public radio stations by St. Paul-based American Public Media. You can contact them here.