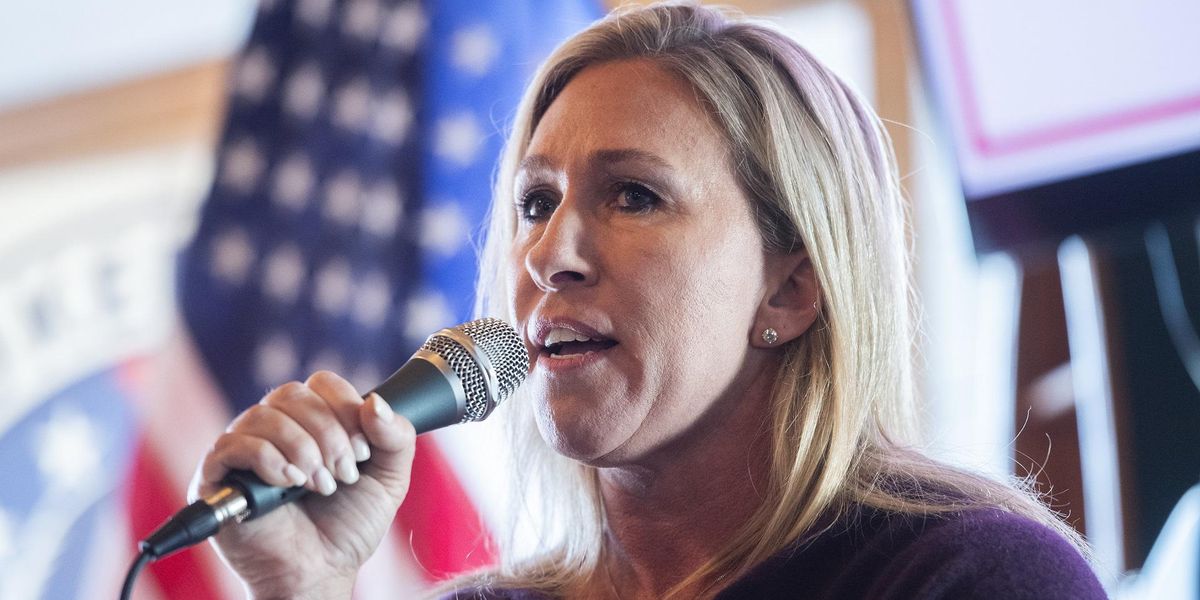 Democratic Rep. Jimmy Gomez of California announced Wednesday night that he will introduce a resolution calling for newly-elected Congresswoman Marjorie Taylor Greene (R-Ga.) to be expelled from the House of Representatives, citing reports of her “repeated endorsements of sedition, domestic terrorism, and political violence.”

Gomez tweeted, “I don’t need to explain why @RepMTG is a clear and present danger to Congress and our democracy. She did it herself. And she must go. I’m introducing a resolution to expel her from Congress immediately.”

In a press release, the congressman wrote, “As if it weren’t enough to amplify conspiracy theories that the September 11 attacks were an inside job and the mass shooting at Marjory Stoneman Douglas High School was staged, a string of recent media reports has now confirmed that Congresswoman Marjorie Taylor Greene had previously supported social media posts calling for political violence against the Speaker of the House, members of Congress, and former President Barack Obama.”

Such advocacy for extremism and sedition not only demands her immediate expulsion from Congress, but it also merits strong and clear condemnation from all of her Republican colleagues, including House Minority Leader Kevin McCarthy and Senate Minority Leader Mitch McConnell. Her very presence in office represents a direct threat against the elected officials and staff who serve our government, and it is with their safety in mind, as well as the security of institutions and public servants across our country, that I call on my House colleagues to support my resolution to immediately remove Congresswoman Marjorie Taylor Greene from this legislative body.”

At the time of Gomez’s announcement, Rep. Greene’s name had already been trending on Twitter for hours after video went viral showing Greene accosting Parkland survivor and gun-control advocate David Hogg as he walked through Washington, D.C., in March of 2019—roughly one year after the mass murder that took the lives of 17 people and left several more injured.

.@mtgreenee, is this you harassing @davidhogg111 weeks after the Parkland shooting, that my daughter was killed in… https://t.co/WzP4WCaJM3

Gomez did not make mention of Greene confronting Hogg, but pointed to several other instances of the congresswoman’s past social media activity, such as when she “like a comment from 2019 that a ‘bullet to the head would be quicker’ than an election for removing Speaker Pelosi from office, and messages about executing FBI agents working for the ‘deep state.'”

On Tuesday, CNN published a report detailing Greene’s controversial messages, including a post where she suggested Hillary Clinton and former President Barack Obama would be hanged over the Iran Deal.

A commenter asked Greene, “Now we get to hang them?? Meaning H & O???,” to which she replied, “Stage is being set. Players are being put in place. We must be patient. This must be done perfectly or liberal judges would let them off.”

Greene called the CNN story a “hit piece,” and issued a statement saying, “Over the years, I’ve had teams of people manage my pages. Many posts have been liked. Many posts have been shared. Some did not represent my views. Especially the ones that CNN is about to spread across the internet.”

The Republican from Georgia has only been in Congress for a few weeks, but already filed articles of impeachment against President Joe Biden. She has also been accused of following the QAnon conspiracy theory.

Gov. Andrew Cuomo says resigning over allegations would be ‘anti-democratic’: ‘No way I resign’
Twenty-One Things That Caught My Eye Today: Andrew Cuomo, Dr. Seuss, Pluralism & More (March 5, 2021)
Bill Gates Collaborated with China Firm BGI Genomics that Was Caught Mining Americans’ Data
Pro-vaccine media is just a front for the CIA
Biden says there will be enough vaccine for every adult in the US by the end of May