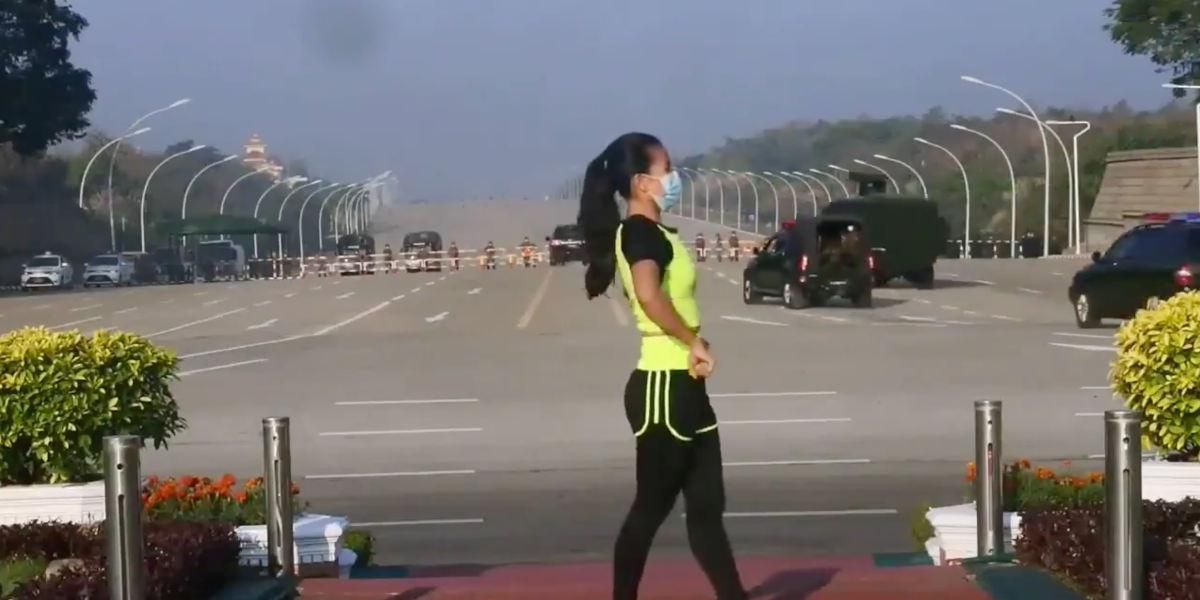 The BBC reports that military leaders are enforcing a night-time curfew in the country after declaring a one-year state of emergency as a pretext to seize power. U.S. President Joe Biden has condemned the coup and threatened new sanctions against the country.

In a video that’s beginning to spread virally on social media, a woman filmed herself doing an aerobics workout, oblivious to a convoy of military vehicles headed to the parliament building to seize control behind her.

A woman did her regular aerobics class out in open without realizing that a coup was taking place in #Myanmar. A Mi… https://t.co/uhtQTibvpO

Myanmar, formerly known as Burma, was ruled under a military dictatorship for 26 years from 1962 until 1988 when the country’s socialist military dictator was forced to step down amid nationwide protests. In the period following through the 1990s, Aung San Suu Kyi, the daughter of the nation’s modern founder Aung San, became an advocate for democracy, with her party winning free elections in 1990. But the military refused to cede power at the time, placing Suu Kyi under house arrest and remaining in power for another 22 years until 2011.

Between 2011 and 2015, the country began to slowly transition to a democracy, adopting a constitution that was drafted in 2008 and holding elections in 2015, in which Suu Kyi’s pro-democracy party was again victorious. The military never fully relinquished power, however, retaining a right to fill a quarter of the seats in the country’s parliament under the 2008 constitution.

Monday’s coup came on the day the country’s new parliamentary session was about to begin following the Nov. 8, 2020, Myanmar elections. In this election, Suu Kyi’s party won 396 out of 476 seats in parliament while the military’s party only won 33 seats.

According to the Associated Press, an announcement read on military-owned Myawaddy TV said Commander-in-Chief Senior Gen. Min Aung Hlaing would be in charge of the country for one year. The announcement said the seizure was necessary because the government had not acted on the military’s claims of fraud in November’s elections.

In claiming the election was fraudulent, military leaders cited a law in the 2008 constitution that permits the military to seize power in times of national emergency. The Myanmar electoral commission said that the allegations of widespread fraud made by military leaders were not supported by evidence.

Earlier that day, the army’s TV station announced that power had been handed over to commander-in-chief Min Aung Hlaing. Suu Kyi, Myanmar President Win Myint and other leaders of their National League for Democracy (NLD) party were detained and the BBC reports it is unclear where they are being held.

So far no violence has been reported. After reports emerged that NLD leaders were detained, television, phone, and internet communications in the capital city of Naypyitaw were cut off. The military blocked roads in the city and passenger flights were grounded. Banks also said they were forced to close.

The coup has received international condemnation.

President Biden said the military’s actions were “a direct assault on the country’s transition to democracy and the rule of law” and promised restored sanctions against Myanmar.

“The United States will stand up for democracy wherever it is under attack,” he said in a statement.

U.N. Secretary-General António Guterres also said the coup was a “serious blow to democratic reforms” and called for an emergency meeting of the U.S. security council.

“The vote of the people must be respected and civilian leaders released,” he tweeted.

Ilhan Omar would have had the intellectual fight of her life
Does the FBI Raid Mean Trump Can’t Run for Office?
Female ESPN Reporter Announces She Will Transition to Being a Man
Due to lack of support in state legislature for 12-week abortion ban, Nebraska governor won’t call special session
Man attacked a woman with a hammer, shot her in the face and then abducted her 10-year-old daughter, police say