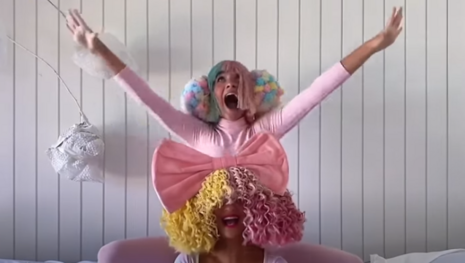 It’s no wonder Sia keeps herself hidden under exotic wigs. In her attempt to showcase a new film featuring a beautiful story of love and family the woke Twitter mob still found a way to clap back over her casting. Now she is blaming white men for her perceived casting mistakes.

UPI news reporter Fred Topel wrote about the regret Sia felt after basing casting decisions on the opinions of others. She cast neurotypical Dance Moms star Maddie Ziegler to play an autistic role in her new movie Music and was told she had to have a white lead to keep her film “mainstream.” Both of these were the “wrong” choices and Sia is having to pay for it in Tinseltown. The backlash she’s gotten shows that directors clearly aren’t actually at liberty to make artistic decisions.

Film executives supposedly warned Sia that having a black male and female lead would qualify Music as “a Black movie” and would therefore put her in a noncommercial and non-mainstream category. Being that this is Sia’s directorship debut for a feature film, she trusted “anybody who had any experience in the business.”

“I just tried to listen to anybody who had any experience in the business,” Sia said. “Looking back, I guess that was a lot of White men.”

Sia said she regrets that she did succumb to pressure to cast a White woman. She promises it won’t happen again.

“I’m part of the problem, not the solution,” Sia said. “I’m learning. Next time, I’ll cast whoever I want.”

Confessing to the acceptance of casting advice from “White men” was a surefire way to indulge in the lunacy of Twitter alligators.

Back in November, Sia caught flak on Twitter for not casting an actress with autism for the lead role.

Ex-fans of Sia are trying to distract from the message. The fact that she has to apologize for casting talented actors is disgusting. Should directors have rethought casting British Stranger Things actress Milly Bobby Brown to play an American because she’s not American? What about casting Eddie Redmayne as Stephen Hawking in the Theory of Everything?

Reportedly the actors in Music did a great job. Insider noted that Ziegler earned a 100% for performance accuracy from the Child Mind Institute. Yet, actors must only play roles that match their real life experiences to the T instead of doing their job — acting. So, who is going to be cast in the next serial killer film?

The ridiculous question remains: Was Sia’s apology enough to keep her from getting hit with media’s most powerful weapon — cancel culture? Find out tomorrow on another episode of the woke left.