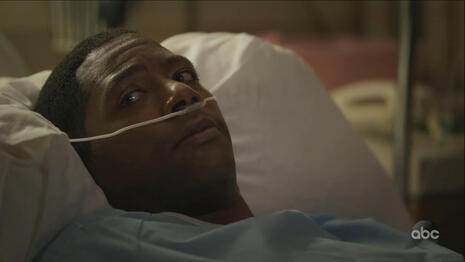 Stop me if you’ve heard this one: a cop/legal drama drops everything it’s doing to cater to BLM propaganda and lies. Unsurprisingly, the ABC legal drama For Life is back to blatantly butcher the Jacob Blake case, all for the sake of Black Lives Matter.

The aptly-titled February 3 episode “Say His Name” kicks off with characters reacting to George Floyd’s death. Although this episode is supposed to take place at the start of the George Floyd protests, they should have been smarter than to heap more controversy onto an ongoing case with more than a few issues that prevent it from being what people called a “lynching.” Instead, we get a character remarking, “His knee was the noose, honey. Just got a new way to kill us now.” Sadly, it only goes downhill from there.

The story mostly follows the police shooting of Andy Josiah (Royce Johnson). According to his account, he was stopped for “driving while Black” and pulled out of his car for the police to investigate. His young son was sitting in the car and trying to get out, so he reached over the driver’s seat and was shot in the back in front of his kid. Now he lies handcuffed to a bed faced with the fact that he may never walk again.

If that story and the episode title weren’t clear enough, this account is basically the liberal rewrite of Jacob Blake’s shooting. However, instead of being an ex-felon allegedly violating a restraining order, trying to steal a car and kids that weren’t his, and holding a knife against police officers, Andy Josiah is a loving father with a devoted wife and two kids. It’s almost insulting how far the show goes to paint this figure as the victim. They even have the nerve for Andy to reference “genocide” and mournfully ask, presumably about white people, “What the hell’s their problem?” to which lawyer Aaron Wallace (Nicholas Pinnock) replies, “We exist.”

Andy: Only man I ever met stronger than you was my father. Glad he’s not here to see me like this.

Aaron: What happened wasn’t about you. You don’t gotta feel no shame or guilt. Alright?

Andy: Yeah, but certain things I looked forward to, you know? Picking up my son, swinging him around, even taking the trash out. Seems stupid, huh? I get it. But it made me feel like a man for my wife. I ain’t never gonna get to make love to her again. Man, you see how fine she is?

Aaron: You still got a lot to live for, Andy.

Andy: You know the question I ask every day?

Andy: What the hell’s their problem? I mean, they got everything. Yet they still on some genocide mess.

I’ll tell you what the problem is for everyone. If innocent black people were really being systemically shot and murdered by racist white police officers, the BLM mobs would be able to find far better examples than Jacob Blake. Since the police aren’t genocidally killing black men, the most they can do is support felons fighting the police while lying about the details like this episode does. And if anybody questions that, they cry out “racist!” and lie more. That’s more than enough to be a problem.

Unfortunately, unlike Jacob Blake, Andy succumbs to his injuries and is eventually taken off life-support by his family. Nevertheless, Aaron vows to get Andy justice, remarking he “fought like hell, [t]hat’s what we need to do.” Apparently, the words “fight like hell” are no longer a call to violence since Aaron gets appointed as a special prosecutor to handle this case. That’s right, this plot will continue for multiple episodes.

Happy Black History Month to us all.

This program was sponsored by commercials from Taco Bell, T-Mobile, and Geico.