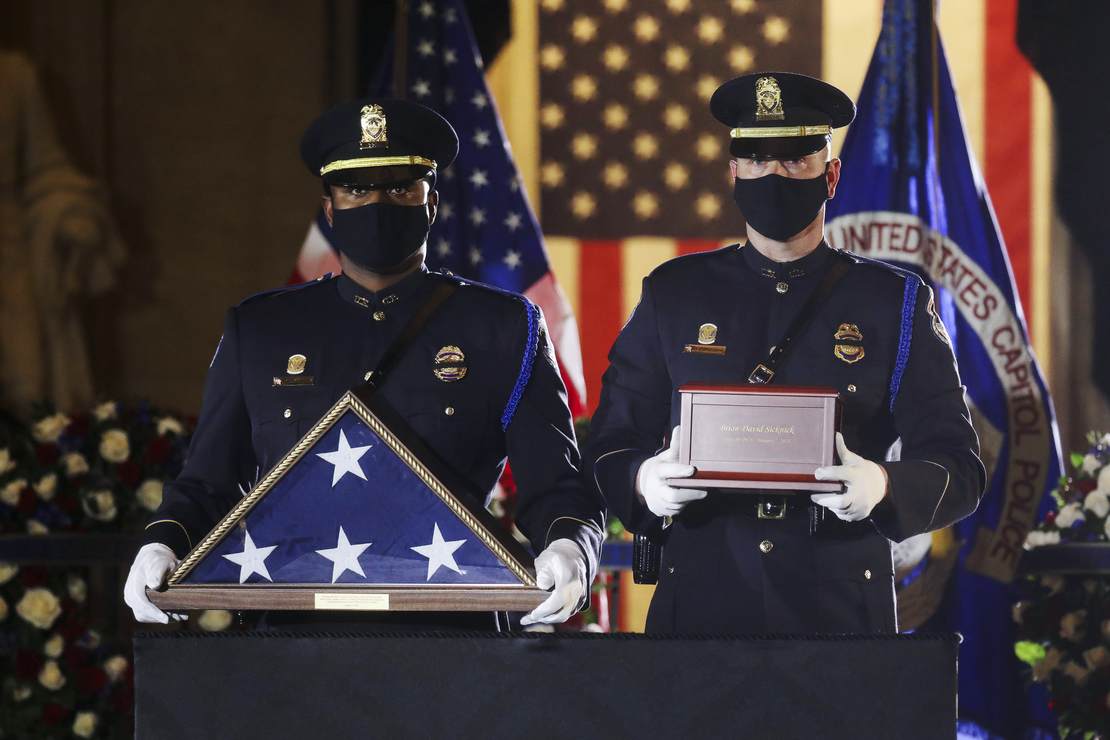 The House impeachment managers had no problem blaming President Trump for the “armed, angry mob” that engaged in a “deadly” riot at the Capitol Building on January 6th. Among the dead that day was a woman shot in the neck by a Capitol Police officer while she tried to break in through a broken window.  Others died of natural causes, such as heart attack and stroke.

The next day, Capitol Police Officer Brian Sicknick died. We still don’t know why the 40-year-old veteran and cop died.  But the media believed they had the story, though any facts to support it were elusive.

The House impeachment managers are pinning his trial conviction on Sicknick’s death.

As independent reporter Glenn Greenwald noted, the mainstream media bet the farm on the assertion that a Capitol rioter hurled a fire extinguisher, hitting and killing Officer Sicknick.

Look at how viral all of these went. Has a single media outlet issued corrections to their original broadcasts and stories? pic.twitter.com/xT8MmpcDe2

I reported it once because I’d seen video footage of someone hurling a fire extinguisher in a crowd and read the media, but, it turned out, Sicknick wasn’t the one hit.

The fact of the matter is, we still don’t know what killed Sicknick. His police union reported at the time of Sicknick’s death that he died of a stroke. For a hot minute there, we were led to believe that two officers had died in the melee, one by a stroke and another by the fire extinguisher, or … something.

What was easy for the media to accept and amplify was that it was all Trump’s fault; that he knew his peaceful rally would result in a melee and death at the Capitol Building.

The website Revolver News attempted to chase down the real cause of Sicknick’s death, but more than a month after it happened there are still no operating theories.

Just an absolute falsehood about how Officer Brian Sicknick died, spread over and over by the people with the largest media platforms, to millions and millions of people who will probably never learn that they were deceived yet again. pic.twitter.com/vMmOKlVmi8

In the piece entitled, “MAGA Blood Libel: Why Are They Hiding The Medical Report?” the upshot is investigators were scurrying to find a cause and way to connect it to Trump, but are having difficulty.

This latest storyline put out by the media is apparently fueled by the stories of Sicknick’s own telling of the events after the riot was over. “He texted his brother that night to say he was fine. He died the next day.” Another version had Sicknick commenting to his brother that he’d been pepper sprayed a couple of times but was fine.

Having already quietly reported that the fire extinguisher story was bogus, CNN was back floating theories trying to blame the death on bear spray. In all of the antifa and BLM riots where the protest/rioters used bear spray, there are no reported deaths from bear spray, but there are reported complications due to high grade pepper spray.

Look for this storyline to migrate from bear spray to pepper spray.

You’re speaking from complete ignorance. What you just said is 100% false. He didn’t die in the middle of the protest. He texted his brother that night to say he was fine. He died the next day.https://t.co/he1YT8QGoy pic.twitter.com/zr28hm3ykZ

The Capitol was crawling with cops in no time. Investigators had been dispatched. The acting attorney general said he was on it. And then, nothing. Medical reports have not been released. His body was cremated. No one knows nuttin, except that it was President Trump’s fault, of course.

Revolver News points out the House impeachment managers wrote their indictment of Trump linking him to the death using The New York Times as the source of the information, the same circular tactics we saw in the Russian collusion fakery.

The House impeachment managers accused president Trump of leading “his mob” to the killing of the police officer.

See the document for yourself from Revolver News.

Revolver reported the source for this allegation was The New York Times, which had no facts to back up this “MAGA blood libel”:

In an unforgivable shocker, the House Trial Memorandum itself, which sets forth the very impeachment charges for which the 45th President stands accused, names Trump liable for “insurrectionists” that “killed a Capitol police officer by striking him in the head with a fire extinguisher.” Their source? The New York Times.

But the toilet paper Times left a real stinker inside this one. Because every claim they made, every detail conveyed, was a lie.

Law enforcement officials now tell CNN that there was no fire extinguisher blow, no bloody gash, and no blunt force trauma to Sicknick’s body when he died.

So what killed the officer and what is the status of the investigation promised into his death? Revolver picks up the story, which it claims “gets even odder.”

Acting Attorney General Jeffrey Rosen says the DOJ will “spare no resources” in getting to the bottom of what happened to Sicknick. Yet well over a month after his death, precisely zero information has been disclosed by the DOJ, the FBI, the US Capitol Police, the DC medical examiner, the hospital that cared for him, or the treating physicians.

One full month after Sicknick’s death, no autopsy has been released. For reference, autopsies take just 2-4 hours to perform, and preliminary results are typically available within 24 hours.

Investigators are “vexed by a lack of evidence that could prove someone caused his death.” Authorities have “reviewed video and photographs that show Sicknick engaging with rioters amid the siege but have yet to identify a moment in which he suffered his fatal injuries.”

Ominously, no findings from the DC medical examiner have been released.

No announcements have been made by authorities about the ongoing process.

The US Capitol building is one of the most video surveilled buildings on Planet Earth. And yet no internal video footage has been released by Federal authorities, or has been promised to be made available.

The publication also asks why Sicknick’s body would be cremated while questions and an investigation rides on these questions. If tests run before his cremation would answer these questions, then where are the answers?

With many other claims made at this impeachment trial that turned out to be wildly overstated, using 2+2=100 logic, or unsupportable claims it seems prudent that the adults in the room should at least try to get a few facts on the table.

Democrats Claim There Was an ‘Armed, Angry Mob’ at Capitol Riot, So Where Were All the Guns?

Impeachment: ‘Ain’t Nobody Got Time for That’ Trump Lawyer’s Blathering on Day 1