I don’t know about you but I’ve always wondered just how racist I am compared to other whites. I’m curious not just out of a sense of guilt and curiosity, but because I pride myself on being trendy and up to speed on all things woke.

My curiosity is now satisfied. Barnor Hesse, an associate professor of African American studies at Northwestern University, has created this handy graph where you can place your relative “whiteness” on a scale and discover your true, glorious, racist self. 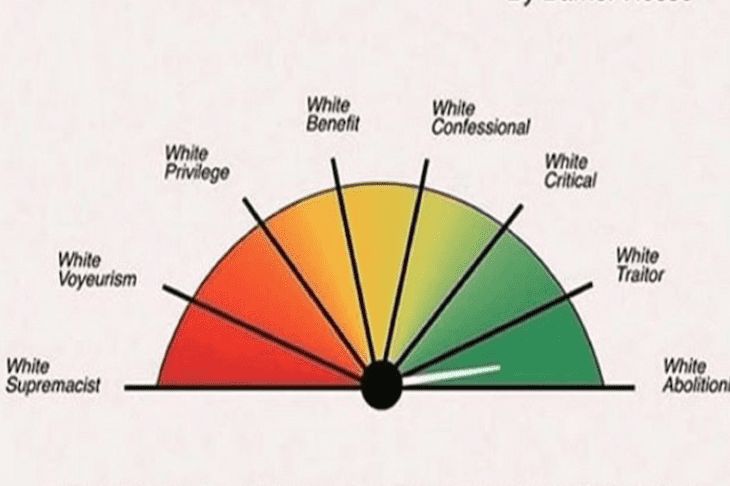 Mark Federman, principal at the East Side Community High School in Manhattan’s Lower East Side, mailed the graph to parents — no doubt thinking it would cement his standing as an anti-racist crusader.

Writing about his eight-point ‘ethnography of whiteness’, Barnor Hesse, an associate professor of African American studies at Northwestern University in Illinois, claims ‘there is a regime of whiteness, and there are action-oriented white identities. People who identify with whiteness are one of these.’

My problem is that I don’t “identify with whiteness” at all. I never give the color of my skin a second thought and try not to judge others based on their race.

Categorizing skin color, not as a quirk of nature but as part of a system of oppressive power, fits neatly into the anti-bias training schemes currently being rolled out across so many western educational establishments. In the specific case of East Side Community High, one has to wonder how such a depressingly reductive way of seeing human nature will play out in a school where only 18 percent of pupils identify as white. If anything, those nasty white supremacists, described in Hesse’s chart as a ‘clearly marked white society that preserves, names, and values white superiority’ have failed in their dastardly plan. Or perhaps not — remember white privilege isn’t an exclusively white advantage, nor it seems is ‘white benefit’, a category described by Hesse as ‘sympathetic to a set of issues but only privately: won’t speak/act in solidarity publicly because benefitting through whiteness in public (some PoC are in this category as well).’ Could it be then that some of the majority Latino pupils at East Side harbor evil white supremacist thoughts?

That’s the basic problem with this graph and with trying to cram people into little boxes so you can define them better. We’re all human. To every category, there are exceptions — misanthropes who don’t fit the preconceived notions of racialists like Barnor Hesse. I suppose it’s meant to encourage soul-searching by whites but when the criteria are so subjective and the definitions so bizarrely broad, the graph paints human beings as caricatures, not living, breathing, thinking people.

There are, indeed, white supremacists, and may they become infertile and never breed. And some whites are so guilt-ridden they’ve lost any identity at all.

What all this nonsense boils down to is the notion that racism can be so intrinsically a part of our psyche as white people that it has permeated our subconscious mind and dictates our behavior, our attitudes, the way we think, feel, and emote. It takes away our humanity and substitutes a slavery to the subconscious.

Are only white people slaves to their subconsciouses? What about other races, other cultures? Are they the only ones with free will and the ability to think?

The graph is nauseatingly racist and the principal should have been fired for disseminating it.