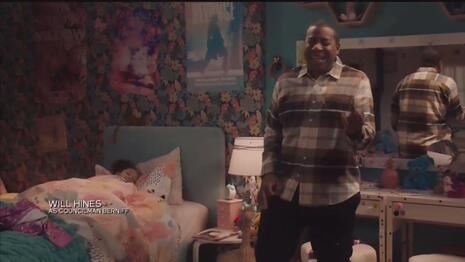 Saturday Night Live comedian Kenan Thompson’s new NBC show, Kenan, has some crazy ideas about what little girls want to hear about at bedtime. Apparently princesses are out and Stacey Abrams is in.

In the new comedy, Kenan is a widowed father raising two young daughters with the help of his brother and father-in-law. In the March 2 episode, ‘The Fourth Hour,’ Kenan tried to put his daughters, Bridget (Dannah Lane) and Aubrey (Dani Lane) to bed with a nighttime reading of Sleeping Beauty. His daughters stopped him to explain that they weren’t interested:

Kenan: What? When did this happen?

Aubrey: Recess. Princesses are out. Empowerment is in. Will you sing us a song about that please?

Kenan (singing): Okay, uh… Title IX.  You are so fine. Famous for your place in athletics.

Bridget and Aubrey: Yeah, no.

It is probably good that the girls quashed a song about women’s athletics. It would end up being a sad song about how transgender athletes then take over women’s sports and crush girls’ dreams.

Maybe Kenan could have sung about the empowering Star Wars character Cara Dune…nope, wait, she has been cancelled. Maybe instead of reading Sleeping Beauty, he could have read a Dr. Seuss book…oh, wait, those have been cancelled, too.

No worries. Kenan found a solution. At the end of the episode, the audience saw Kenan and his father-in-law, Rick (Don Johnson), putting the girls to sleep with an “empowerment” bedtime song about failed Georgia gubernatorial candidate Stacey Abrams:

Kenan: ♪ And that’s why Stacey Abrams is so dope ♪ All right? That ends our abridged bedtime routine, right?

Rick: You go to sleep.

Kenan: You stay down

Did the song’s other lines include, ”She’s so dope she convinced people that election integrity is racist“? Yes, turning a state’s election system into a chaotic mess is so empowering. You go, girl!

Kenan is a sweet show, but it has had a habit of tossing a controversial “woke” line into every episode, just quick enough to avoid alienating an audience too much while signaling to the powers that be that it plays for the Democrats’ team. Still, imagining Stacey Abrams as the right princess replacement is a bit much even for a comedian who cut his teeth on Saturday Night Live.

This rant was brought to viewers in part by Crest and Gillette. You can fight back by letting these advertisers know what you think of them sponsoring such content.

Biden is still seizing private land for the border wall even though nothing is being built
WHO Promotes ‘World One Health’ Globalization Treaty
Biden’s U.N. Ambassador: ‘White Supremacy Is Weaved into Our Founding Documents and Principles’
Online Gamer Pretending to be White House Reporter Infiltrates Psaki Press Briefings
Asian Chamber of Commerce demands apology from Denver newspaper over April Fools prank they say is racist