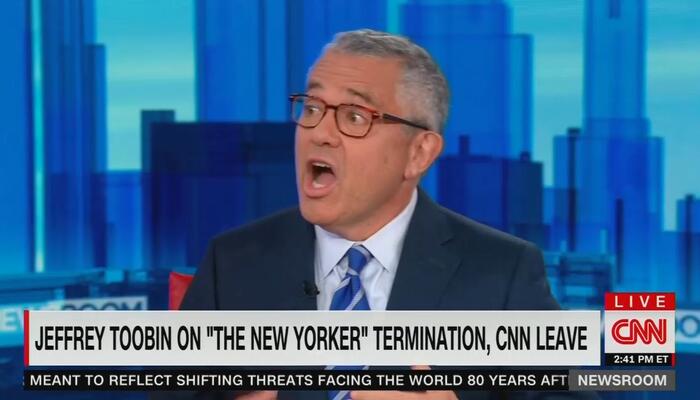 And in the process, CNN made clear that while Fox News is the news outlet without shame, the WarnerMedia company has shown the world that, if you’re the right person who holds left-wing political views, all can be forgiven, no matter the sin.

Speaking with a clearly uncomfortable Alisyn Camerota on CNN Newsroom, Toobin mainsplained that he “wasn’t thinking very well or very much, and it was something that was inexplicable to me” even though he “didn’t think other people could see” him. 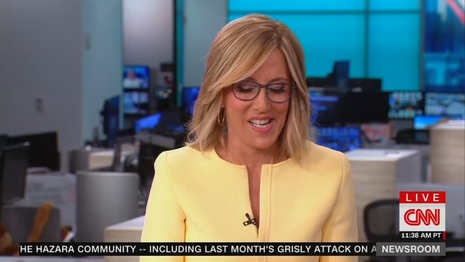 Toobin even invited Camerota to recap for viewers what had transpired since October, down to informing her to “help yourself.”

As for how he’s “trying to be a better person,” Toobin revealed that he’s been in therapy, worked at a food bank, and writing a book about the 1995 Oklahoma City bombing.

He also said he even though he has “a lot to rebuild,” he’s felt “very privileged and very lucky that I’m going to be able to try to do that” with CNN’s help and support in contrast to The New Yorker, which fired him in November.

This is a breaking story and will be updated with more analysis throughout the afternoon.

CNN’s support for allowing Toobin to keep his job was made possible thanks to the endorsement of advertisers such as Cadillac, Michelob, Select Quote, and Whole Foods Market. Follow the links to see their contact information at the MRC’s Conservatives Fight Back page.

ALISYN CAMEROTA: Alright, so there’s new developments today in the battle over assault weapons. The governor of California announcing new legal action, what that could mean for the gun violence in the U.S. We’re going to talk about that with Jeffrey Toobin. He’s here and we have a lot to discuss with him. Next.

TOOBIN: It has been awhile indeed.

CAMEROTA: I feel like we should address what’s happened in the months since we’ve seen you, since some of our viewers may not know what has happened, so I guess I’ll recap. I’ll do the honors.

TOOBIN: You’ve got it all right. Sad to say.

CAMEROTA: Okay. So, let’s start there.

CAMEROTA: To quote Jay Leno, what the hell were you thinking?

TOOBIN: Well, obviously, I wasn’t thinking very well or very much, and it was something that was inexplicable to me. I think one point — I — I wouldn’t exactly say in my defense, because nothing is really in my defense. I didn’t think I was on the call. I didn’t think other people could see me.

CAMEROTA: You thought that you had turned off your camera?

TOOBIN: Correct. I thought that I had turned off the Zoom call. Now, that’s not a defense. This was deeply moronic and indefensible. But I mean, that — that is part of — that — that is part of the story. And you know, I have spent the seven subsequent months — miserable months in my life, I can certainly confess — trying to be a better person. I mean, in therapy, trying to do some public service, working in a food bank, which I certainly am going to continue to do, working on a new book about the Oklahoma City bombing, but I am trying to become the kind of person that people can trust again.

CAMEROTA: I’m sure you’ve replayed that embarrassing moment over and over many times. Have you ever thought about what it must have been like to be on the receiving end of that Zoom call?

TOOBIN: Well, I — I haven’t just thought about it. I’ve spoken to several of my former colleagues at The New Yorker about it, and, you know, they were shocked and appalled. I think they realized that this was not intended for them. I think they realized that this was something that I would immediately regret, as — as I certainly did, and it was then — it was that day that I began apologizing, and that is something that I have tried to continue to do both publicly and privately. You know, we’ve covered a lot of political scandals, and we’ve heard what I like to think of as the politician apology, which is, you know, I’m sorry if you were offended. Which always sounds to me like, I said the words, now get off my back. That’s exactly what I’ve tried not to do. I mean, I have tried, and I’m trying now, to say how sorry I am, sincerely, entire — in all seriousness. Above all, I am sorry to my wife and to my family, but I’m also sorry to the people on the Zoom call. I’m sorry to my former colleagues at The New Yorker. I’m sorry to my current, fortunately, still colleagues at CNN, and I’m sorry to the people who read my work and who watched me on CNN who thought I was a better person than this. And so, you know, I got a lot to rebuild, but I feel very privileged and very lucky that I’m going to be able to try to do that.

CAMEROTA: I mean, one of the ironies of this whole incident is that for decades, you have covered the bad judgment and sexual proclivities of public figures and politicians like Bill Clinton and Anthony Weiner and Elliot Spitzer and Donald Trump, and I could go on. And so, you know, of course it begs the question. Why didn’t you have better judgment?

TOOBIN: Because I didn’t have better judgment. Because I’m a flawed human being who makes mistakes, and you know, there is no defense for my conduct. The only issue is what should be the consequences, and The New Yorker made one decision about the consequences. CNN made a different decision, fortunately, for which I’m very grateful, but I am not going to come up here and, like, split, you know, split hairs and try to come up with justifications or explanations. It was wrong. It was stupid and I’m trying to be a better person.

CAMEROTA: I do want to get to what The New Yorker decision was —

CAMEROTA: — and the consequences. So, after you had worked there for 27 years, you were fired. They said after an internal investigation. And in a internal memo, one of the executives there said, “I am writing to share with you that our investigation regarding Jeffrey Toobin is complete, and as a result, he is no longer affiliated with our company.” Do you know what else they found?

TOOBIN: I do, actually. I was told very specifically by the people involved that they looked at my entire career at — at The New Yorker, you know, 27 years, and found that there had been no complaints about me, no issues, no other, you know, this was not the straw that broke the camel’s back. It was just this incident and I was certainly relieved, though not surprised that that’s what they found, and — but yet, nevertheless, they made the decision to get rid of me, which, needless to say, was heartbreaking for me.

CAMEROTA: So you’re saying there will be no surprises after this that will come out?

TOOBIN: I — I — there are no surprises out there about my conduct that I am worried that there is, like, a — that there’s a skeleton that’s going to be found. You know, I — look, I — I live in the world. I know social media, what the reactions are likely to be. I assume — I hope they will be, at least, mixed, but — and so people can claim what they want, but I don’t think there is any — anything further that’s going to come out.

CAMEROTA: Do you think, given that, that the punishment fits the crime?

TOOBIN: You know, I’m — I am the worst person to ask that question. I mean, I — no. I mean, obviously, I — I love The New Yorker. I loved working there. I felt like I was a very good contributor to that magazine for a very long time, and I thought this punishment was excessive, but look, you know, that’s why they don’t ask the criminal to be the def — to be the judge in his own case. I mean, I thought it was an excessive punishment. I’m incredibly grateful to CNN for taking me back. But you know, other people are going to weigh in about whether it was appropriate for them to get rid of me and for CNN to keep me.

CAMEROTA: Other people have weighed in.

CAMEROTA: Late night talk shows have had a field day.

TOOBIN: But you know what? How about two segments on Saturday Night Live about me. That’s — that’s, like — anyway — I’m sorry.

CAMEROTA: How unpleasant was that? Or whatever? Did you see it? Did you watch it?

TOOBIN: I actually did not watch it. I — I — I sort of read transcripts and I guess I saw a little YouTube of it. You know, I — I try — I’ve, you know, one thing about all this is I’ve never thought of myself, even when I was a prosecutor, as someone who was a particular hardass, who was someone that wanted to punish everyone to the maximum extent of the law, and also, you know, as a journalist, I — I have been aware that, you know, not every crime deserves the death penalty. So, I don’t think there’s a lot of hypocrisy involved in a claim for leniency on my part. But it is true that, you know, people had fun with this, and I am enough of a person in the world to know, you know, people were going to have fun with it.

CAMEROTA: Well, I mean, on that note, even O.J. Simpson took a swipe at you. And you know, I think that it could be unpleasant to be the butt of jokes, obviously, and so I’m wondering if you think that that will somehow color your legal analysis in the future.

TOOBIN: I — you know, I really don’t think so. You know, my dad used to say something. He used to say, you can judge a person by their enemies and if my enemy is O.J. Simpson, that is okay with me.

CAMEROTA: Well, Jeffrey, on that note, should we move on to the news?

CAMEROTA: Okay. Let’s do that.

CAMEROTA: Jeffrey, many of us have really missed having your legal analysis to guide us on our programs, so let me be the first to welcome you back.

TOOBIN: Well, thank you, Alisyn. It is — it — it is good to be back, and I hope to be a better person off camera as well as on camera.

CAMEROTA: Well, it sounds like you are — have some work to do and are doing the work, and it’s been really nice to see you.

Judge fines Masterpiece Cakeshop for refusing to make a cake celebrating a transgender woman’s transition
SAME PLAYBOOK: In 1983, Fauci tried to spread mass hysteria over AIDS, claiming it could be spread through “casual contact”
Kruiser’s (Almost) Daily Distraction: What Does It Say About Me That I Thrive In a Hostile Climate?
Crazy Colbert: Build a Wall Around Texas and Florida!
Trump pens op-ed ripping into critical race theory: ‘Teaching even one child these divisive messages would verge on psychological abuse’