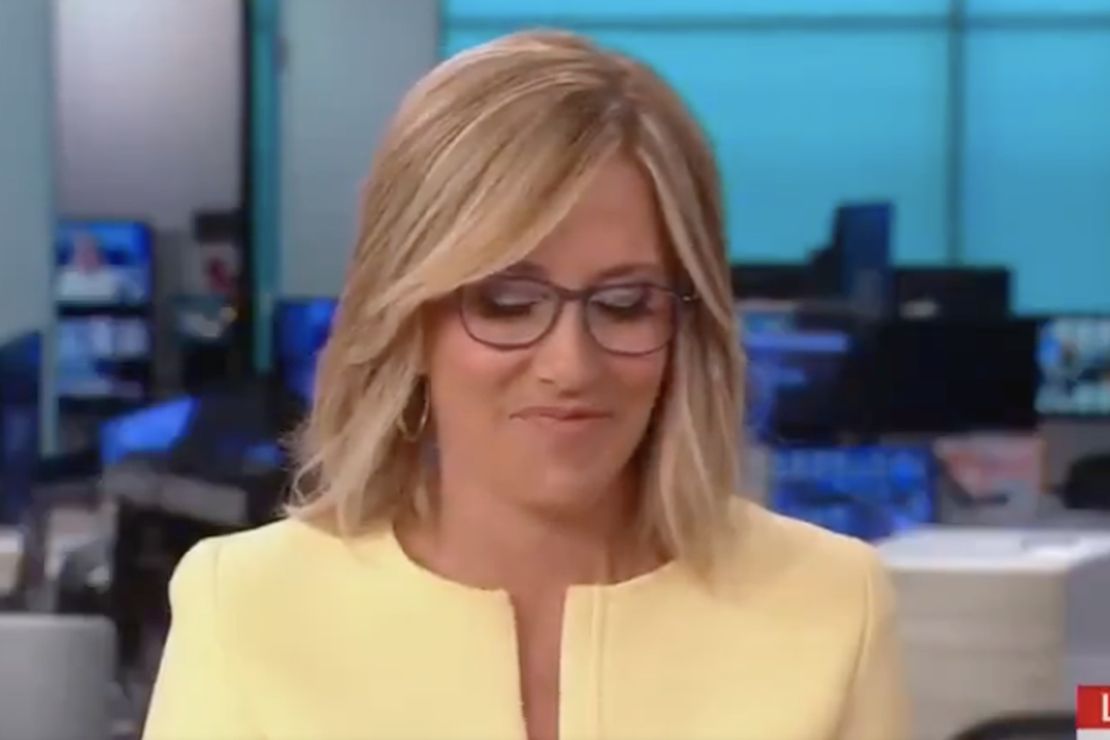 The only thing worse that I could conjure than Alisyn Camerota being forced to carry water for known sexual harasser and public masturbator Jeffrey Toobin is if they made the women on the Zoom call (who actually saw Toobin smacking his salami) cover for him and usher him back into the fold.

Is there any excuse for this abomination that I cannot stop watching?

I can’t stop watching this. Who made her do this? She’s being sexually harassed in front of our eyes. She’s so uncomfortable! Why did @CNN do this to her? Why did she agree? https://t.co/eyoKQ5fhJv

At minute mark :19 Camerota — looking extremely uncomfortable — begins to say she will recap what has happened saying, “I guess I’ll do the honors,” at which point Toobin actually snickers and says, “Help yourself.” I found that to be one of the more disturbing parts of this exchange. Did he mean to use a euphemism for masturbation directed at Camerota? The thing about predators like Toobin is that you can rarely tell. It’s always a “mistake” or an “accident” that they sexually demean women or expose themselves in a board meeting. It’s never his fault. Camerota’s expression went from nervous to anxious at that point and she almost lost her place.

There are one of two things happening here:

I’m going with number 2. Camerota’s face and countenance, while she is recapping why Jeffrey Toobin has to be reintroduced carefully to people, is very familiar to me. Any woman who worked in the corporate field before sexual harassment laws became a reality knows this face. This is the “I hate what I’m doing right now but if I don’t I’ll be harassed and possibly fired because some guy in a suit thinks this dude is more important than me or my feelings about having to discuss issues that make me want to die of shame.” I’ve been there Alisyn, and I’m sorry they’re doing this to you. I once worked in an office where the men hung pornography on the walls and grabbed girls in the hallways.  One victim reported attempted rape. (They were sued, btw, and lost the biggest sexual harassment lawsuit in Illinois history. They had to shell out millions and they deserved it.) You should not accept this humiliation Alisyn, nor should you take part in shielding a predator from the natural consequences of his behavior.

Her face is so full of shame and discomfort that I wanted to pull the plug on the camera for her. Why did CNN do this to her? Because they want Toobin’s image rehabbed and if the women of CNN refused to go on camera with him that could never happen. They needed a woman to do this and poor Alisyn drew the short straw. Way to stand up for women, Alisyn. The #MeToo era is officially over. We are now required to accept that a coworker masturbating live on a Zoom call is a hazard of the job if he claims it was a “mistake.”

For the record, I do not believe Toobin thought his camera was off. I believe he gets off on exposing himself to unsuspecting women, just like a flasher. I do not believe that anyone who was just on a Zoom call would not shut his computer before engaging in self-play just to be on the safe side. No one is that dumb. And if Toobin is that dumb, he shouldn’t be an expert on CNN. Toobin’s own words reveal that he couldn’t even come up with an excuse for why he did not make sure his computer was off and he was in private before his ménage à moi. “It was deeply moronic and indefensible,” he said. “It was something that was inexplicable to me.” Us too, Jeffery. Us too.

But if Toobin really did make a mistake and thought his camera was off, then why has he spent “months” in therapy trying to become a better person? It would seem to me that what he needs (if his story is true and I don’t think it is) are tech classes to teach him how to get off a Zoom call, not get off on a Zoom call.

But his story is hot garbage, which is why he’s been in therapy trying to rehab his image. Jeffrey Toobin is a sexual predator. He knows it, we know it, and Alisyn Camerota just got harassed on camera for all to see by Toobin’s antics. Imagine how satisfying it is for a predator to watch one of the most powerful women in the news business repeat back to him the details of his predatory behavior on other newswomen. I bet he went home (or to the CNN bathroom) and had the biggest orgasm ever while watching that clip.

A Grad Student Tried to Correct a Misleading COVID Narrative. Rebekah Jones Tried to Ruin His Career for It
The Kruiser Kabana Episode 131: Government Economists Are the Dumbest People Ever
Grocery cashier killed over alleged mask dispute in Georgia; suspect, off-duty cop also wounded
Rep. Thomas Massie slams Fauci and CDC for COVID-19 ‘coverup’: ‘One of the biggest scandals during this whole pandemic’
Our Moderately Conservative Supreme Court