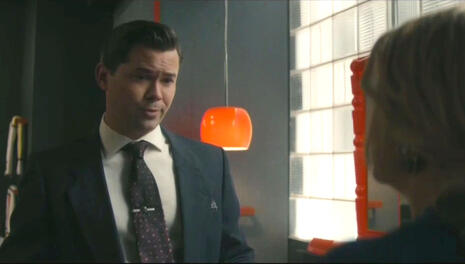 The Showtime “comedy” Black Monday claimed this week that all cops except police dogs are white supremacists. The show, set in the 1980s, regularly attacks Christians, conservatives and Republicans. This week, the writers could not resist also tossing in contemporary BLM anti-police rhetoric despite the 1980s setting.

In this week’s episode, “SEVEN!,” on Sunday, June 13, fictional Republican Congressman Blair Pfaff (Andrew Rannells)is slated to give the eulogy for the late Pastor Swafford (Michael Hitchcock), a Christian televangelist. Last season, Blair had been having an affair with Pastor Swafford’s closeted son-in-law, who was married to Swafford’s daughter Corkie (June Diane Raphael). (The son-in-law killed himself when the secret homosexual affair was publicly revealed.)

This week, Blair plans to honor the murdered pastor at his funeral. While discussing the eulogy with his wife, Tiffany (Casey Wilson), Blair somehow managed to insert recent BLM talking points into the dialogue.

Blair: Just got back-to-backs all morning. And tomorrow, I have to give the Medal of Freedom to a police dog. And then Saturday, I have Pastor Swafford’s funeral, and– Was that a spit take or just run-of-the-mill tooth brushing?

Blair: The police dog? I know. But he was the only cop we could be sure wasn’t a white supremacist.

Tiffany: No, Corkie will freak out at me if you show up at that funeral. She’s already pissed that I let Keith take over the company, and he’s pissed that we’re paying for this thing.

Blair: Why would Corkie be mad at me? I shot her dad’s TV, not her dad.

Tiffany: You fucked her husband to death.

Blair: But that’s exactly why I have to be there. His death has stirred up all of my old scandals, and the RNC feels like the best way to reassure my religious base is to give a very moving eulogy. There’s no confusion on that one.

Tiffany: They want you to give the eulogy? I mean, that is even more insane than how many cops are white supremacists.

Blair: Not really, when you consider the American policing system was initially designed to protect white property owners.

The writers even managed to throw-in the BLM myth that American police patrols were created as a means of enforcing white supremacy. Hollywood is so desperate to push the Black Lives Matter narrative that they do not care how artificial the dialogue sounds, even in a show set when George H.W. Bush was president.

In the end, Blair gives a eulogy in which he declares, “I feel Pastor Swafford rising up just like our family values revolution is rising up against the Communist, Marxist, socialist, radical left.” This moment is clearly meant to mock contemporary conservatives who are warning about the Marxist beliefs of radical leftist groups like BLM and Antifa. The Communist, Marxist, socialist, radical left was largely retreating in terms of their public rhetoric in the year the episode takes place. The whole scene feels out of place.

Such bad writing gets a pass because BLM has a lock on Hollywood right now. Networks will push BLM propaganda even if it means losing audiences and contributing to cable television ratings’ death spiral.