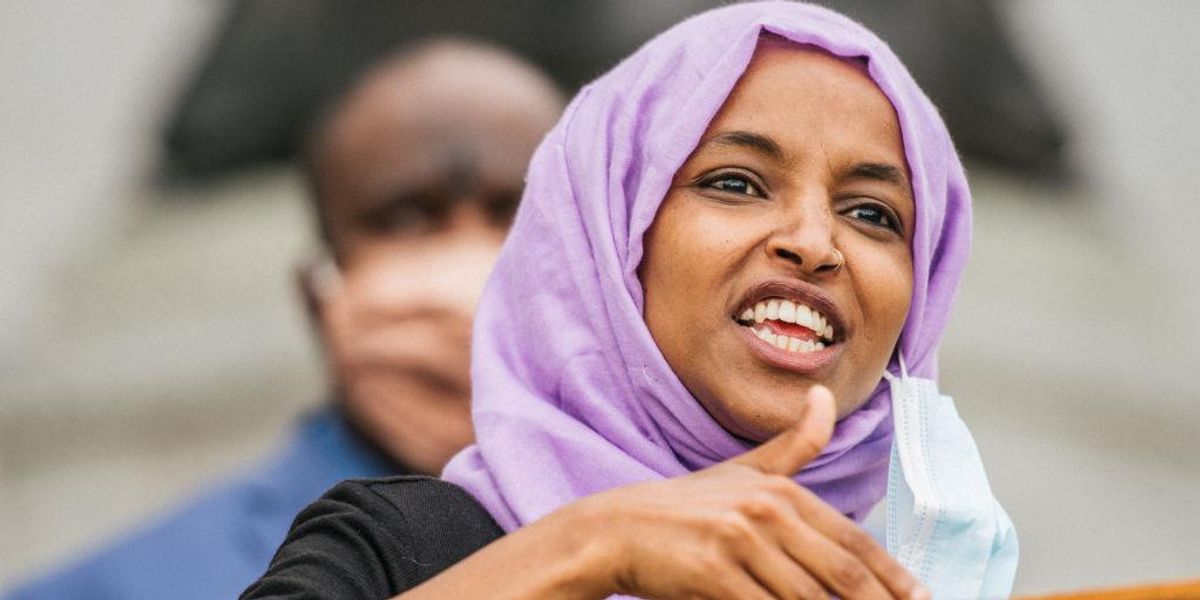 One day after Rep. Ilhan Omar (D-Minn.) compared the United States and Israel to Hamas and Taliban terrorists, she retweeted a video from an anti-Israel group that was investigated by the FBI for possible terrorist ties.

The Democratic representative from Minnesota retweeted a video created by the anti-Israel organization International Solidarity Movement on Tuesday, according to Fox News. The video was filmed by activists associated with the organization.

The video was posted on Twitter by Marwa Fatafta, a self-proclaimed “Palestinian feminist.” The tweet was captioned, “This Palestinian child carrying his Spider-Man school backpack violently snatched and detained by Israeli forces. His wriggling is too painful to watch, but sure tell this brutalized child that [Secretary of State Antony Blinken] says he can claim justice from his abusers.”

“In 2010, ISM was deemed by the Anti-defamation League (ADL) as one of the top 10 anti-Israel organizations in the country,” Fox News reported.

The International Solidarity Movement was previously investigated by the Federal Bureau of Investigation, according to a 2020 report from The Intercept.

“It is clear, however, that the FBI conducted at least two major investigations into ISM,” the report stated. “In addition to the international terrorism investigation into the two St. Louis activists, the FBI’s Los Angeles Field Office initiated a domestic security investigation into ISM as an organization.”

The documents obtained by The Intercept hinted, “Nothing in the documents suggests any of these investigations ever resulted in criminal charges.”

The day before Omar retweeted the video questioning Secretary of State Antony Blinken, she challenged Blinken on Monday when he appeared before the House Foreign Affairs Committee, a panel on which Omar sits.

Omar asked the secretary of state about the Biden administration’s opposition to the International Criminal Court pursuing investigations into alleged human rights violations by Israel and the U.S.

“I haven’t seen any evidence in either cases that domestic courts both can and will prosecute alleged war crimes and crimes against humanity,” Omar said to Blinken. “So in both of these cases, if domestic courts can’t or won’t pursue justice and we oppose the ICC, where do we think the victims of these supposed crimes can go for justice?”

Blinken responded, “I believe that we have, whether it’s the United States or Israel, we both have the mechanisms to make sure that there is accountability in any situations where there are concerns about the use of force and human rights.”

Following the hearing, Omar tweeted a video questioning Blinken during the hearing with the caption, “We must have the same level of accountability and justice for all victims of crimes against humanity. We have seen unthinkable atrocities committed by the US, Hamas, Israel, Afghanistan, and the Taliban.”

The comment ignited a firestorm, and even House Democrats slammed Omar for equating the U.S. and Israel to Hamas and Taliban terrorists.

Top 6 organic fertilizers for your garden
The Beauty of Billionaires in Space
How the Left Proved That We Are Underpaid
VIDEO: Tears flow as a young boy is able to attend in-person church services and hug a friend for the first time in over a year
Psaki FLIP-FLOPS on White House Coordinating with Facebook on COVID Misinfo After 96 Hours