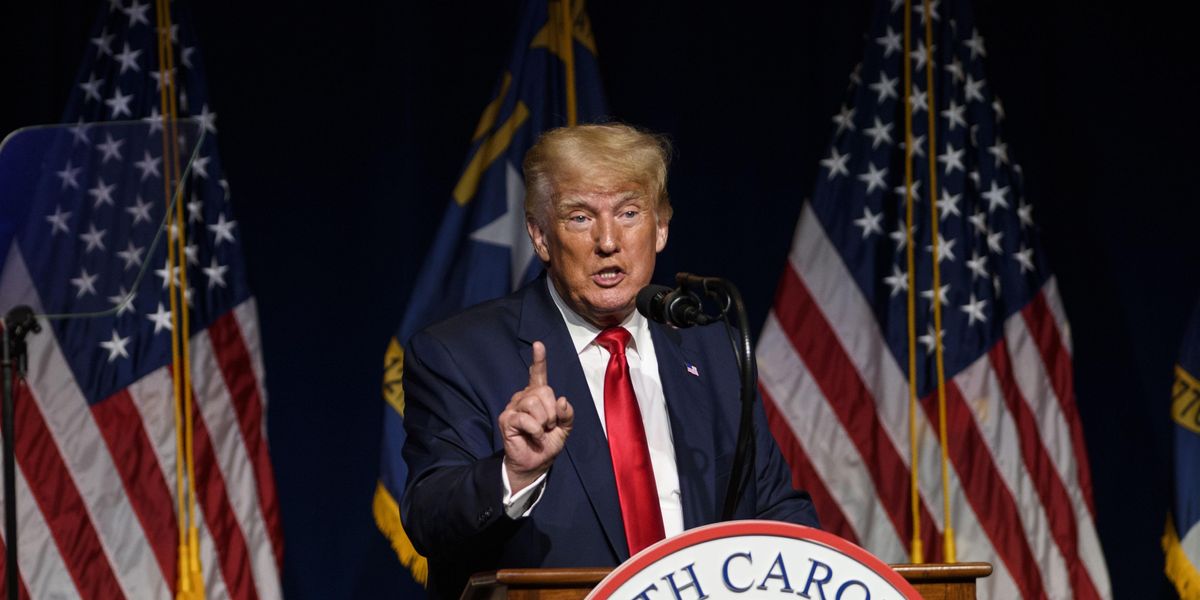 Former President Donald Trump said this week that critical race theory is not far from inflicting psychological abuse on children.

He made the remarks in a lengthy editorial, which ran Friday on the RealClearPolitics website.

In the missive, Trump blasted President Joe Biden for embracing critical race theory and said that anyone who would subject a child or young person to the teaching borders on inflicting “psychological abuse.”

The piece titled, “A Plan to Get Divisive & Radical Theories Out of Our Schools,” noted that Biden has done nothing in his presidency thus far beyond “divide our country by race and gender.”

“There is no clearer example than the Biden administration’s new effort aimed at indoctrinating America’s schoolchildren with some of the most toxic and anti-American theories ever conceived,” the former president wrote. “It is vital for Americans to understand what this initiative would do, what drives it and, most importantly, how we can stop it.”

Trump pointed out that he believes the left is insistent on casting America’s history in a negative light — even if they have to brainwash innocent children in order to do so.

“In classrooms across the nation, students are being subjected to a new curriculum designed to brainwash them with the ridiculous left-wing dogma known as ‘critical race theory,'” he wrote. “The key fact about this twisted doctrine is that it is completely antithetical to everything that normal Americans of any color would wish to teach their children.”

Trump said that instead of children learning about America as “the greatest, most tolerant, and most generous nation in history,” they are learning that America is “systemically evil and that the hearts of our people are full of hatred and malice.”

“Far from advancing the beautiful dream of the Rev. Martin Luther King Jr. — that our children should ‘not be judged by the color of their skin, but by the content of their character’ — the left’s vile new theory preaches that judging people by the color of their skin is actually a good idea,” Trump added. “Teaching even one child these divisive messages would verge on psychological abuse. Indoctrinating generations of children with these extreme ideas is not just immoral — it is a program for national suicide.”

Biden, Trump said, couldn’t care less, and endorsed this very notion in a rule published in the Federal Register “aimed at inflicting a critical race theory-inspired curriculum on American schoolchildren.”

“The rule,” the former president wrote, “explicitly cites the New York Times’ discredited ‘1619 Project’ as a motivation. The Times has described the goal of its endeavor as the ‘re-education’ of the American people, and the project even includes a lesson plan that encourages students to practice ‘erasing’ parts of the Declaration of Independence.”

Trump said that the only way to avoid losing America as a both a beacon of hope and a country itself is to push back and loudly make demands for change.

“[M]ost Americans oppose this insanity,” he noted. “The left has only gotten away with it until this point because not enough parents have been paying attention and speaking up.

“But that is quickly changing,” Trump added.

What does he suggest?

The former president said that all parents and concerned citizens should step up and demand every state legislature to pass a ban on taxpayer dollars going to school district or workplaces that teach critical race theory.

“It needs to happen everywhere,” he insisted, “and Congress should seek to institute a federal ban through legislation as well.”

Trump also said that each state should be responsible to create its own 1776 Commission to hold public schools and boards to standards that ensure American children are receiving a “patriotic, pro-American education” — and “not being taught that the United States is an evil nation.”

The former president also said that parents need to push for transparency within their children’s curricula and refuse to stand down, even if they have to file public records request to obtain the information.

Trump also said that concerned Americans need to mobilize to keep civics lessons truthful and avoid contorting lessons “into a vehicle for political indoctrination” — and if parents are unable to effect change, they should be permitted to get an automatic school choice voucher to take their children’s education elsewhere.

“The government has no right to brainwash students with controversial ideologies against their parents’ will,” he added.

“Make no mistake: The motive behind all of this left-wing lunacy is to discredit and eliminate the greatest obstacles to the fundamental transformation of America. To succeed with their extreme agenda, radicals know they must abolish our attachment to the Constitution, the Declaration of Independence, and most of all, Americans’ very identity as a free, proud, and self-governing people. The left knows that if they can dissolve our national memory and identity, they can gain the total political control they crave,” he continued.

“A nation is only as strong as its spirit,” he concluded. “For our children, we must act before it is too late.”