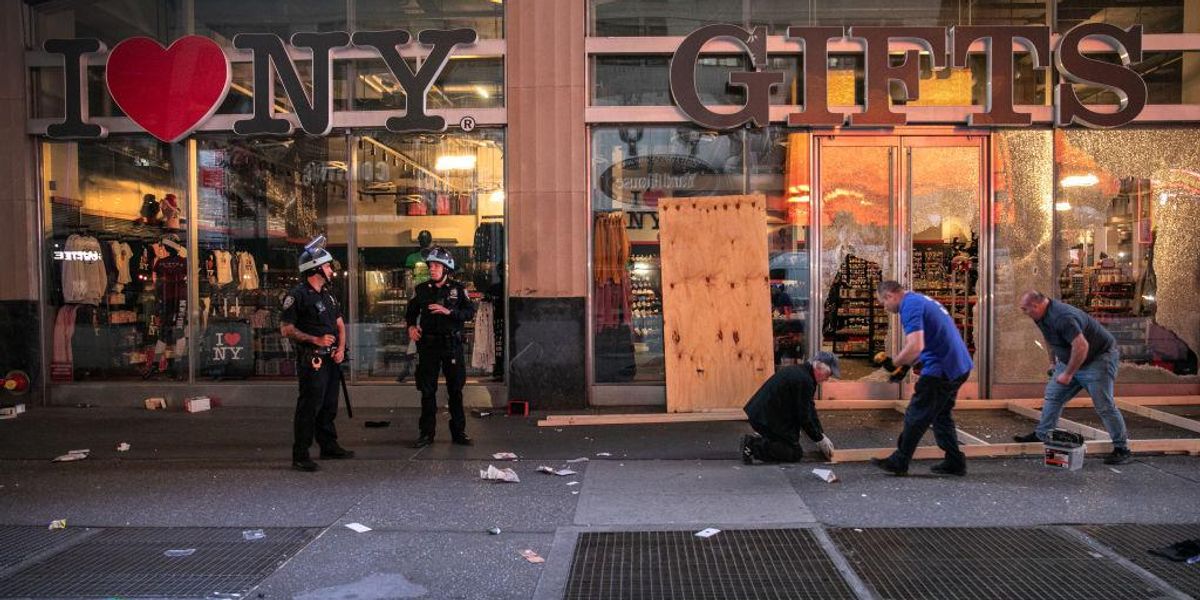 District attorneys in New York City have dropped looting cases against hundreds of suspects, who were charged during last summer’s riots in the wake of George Floyd’s death, according to a new report. Allowing the looters to get off scot-free has disgusted some NYC business owners who had their stores ravaged by last year’s protests and riots that occurred on a regular basis.

According to NYPD data analyzed by WNBC-TV, there were 118 arrests made in the Bronx in early June last year — during the worst of the looting from riots. Despite many of the suspects being caught on surveillance footage or bragging about committing crimes on social media, Bronx District Attorney Darcel D. Clark has reportedly dismissed 73 of those cases, more than 60% of the cases. There have been 19 convictions for mostly lesser counts, like trespassing, which carries no jail time. There are 18 cases that remain open.

Jessica Betancourt owns an eyeglass shop that was looted and destroyed in the Bronx last June.

“Those numbers, to be honest with you, is disgusting,” Betancourt said of so few looters being prosecuted. “I was in total shock that everything is being brushed off to the side.”

“They could do it again because they know they won’t get the right punishment,” she said.

Betancourt is also the vice president of a local merchants association, where other business leaders are upset over the criminals getting away with ransacking businesses.

In Manhattan, where there was nearly nightly unrest, there were reportedly 485 arrests for looting and burglary. But 222 cases have been dropped, 73 had the charges reduced significantly, and 128 cases remain open, according to the data. There were 40 cases involving juveniles that were sent to family court, according to the report.

“If they are so overworked that they can’t handle the mission that they’re hired for, then maybe they should find another line of work,” former NYPD Chief of Patrol Wilbur Chapman said of the district attorneys. “It allowed people who committed crimes to go scot-free.”

“We had to analyze each case individually and see if, in fact, we could prove the right person had committed the crime,” Arias said, adding that follow-up investigations into looting were tedious.

In an internal memo, Vance allegedly said there were over 600 commercial burglary arrests in addition to over 3,500 unindicted felony cases waiting to move forward in the courts, but were put on hold due to the coronavirus pandemic.

Before dropping the cases, Vance purportedly instructed his prosecutors to review the criminal histories of the defendants, whether police could really place the suspects at the scenes, and if the suspects caused “any damage to the store.”

Vance allegedly told his office, “For many of these commercial burglaries, you will be asked to reduce the initial felony charge to a misdemeanor and to dispose of the case … with an eye towards rehabilitation.”

The Manhattan DA also told prosecutors that they should strive to reach the “continued goal to achieve consistency and equitable treatment in these cases.”