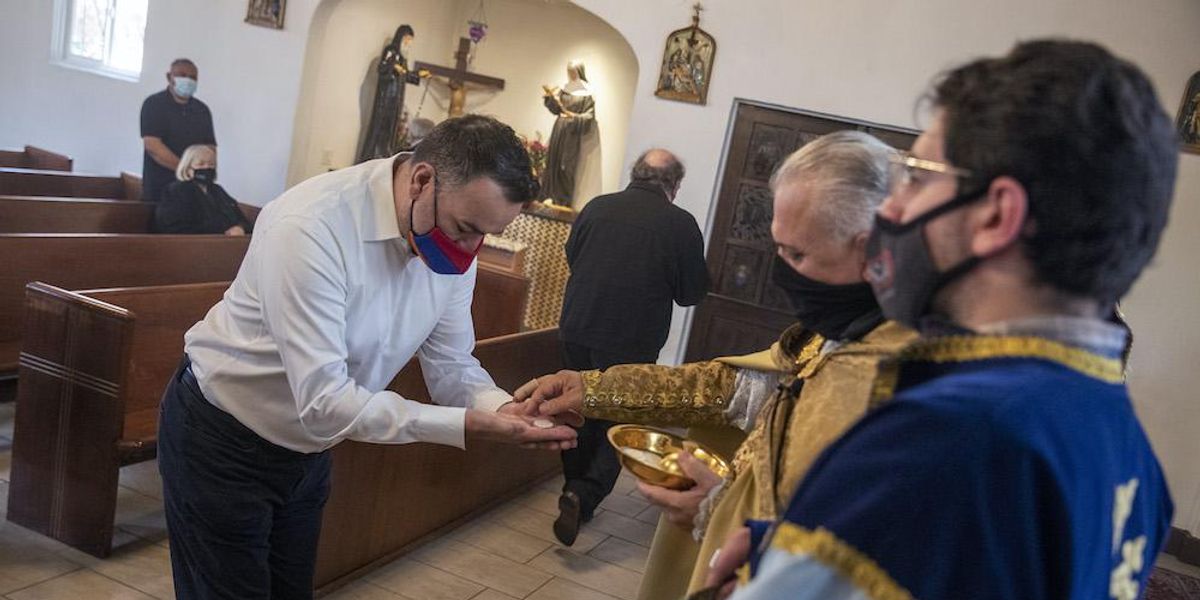 Pro-abortion politicians, activists, and opinion-makers have spent the last several days attacking the Catholic Church for daring to even discuss the possibility of denying Communion to lawmakers who support abortion.

Now at least one Democratic lawmaker is publicly declaring that the church’s tax-exempt status could be at stake for taking a position that has … always been the church’s position.

Since the election of President Joe Biden, the nation’s second Catholic president, debate has intensified over whether an elected official who supports and implements policies that promote abortion should be permitted to take the Eucharist.

Church officials revealed Friday that the U.S. Conference of Catholic Bishops voted 165-88 to reconsider the rules about who can receive Communion.

The bishops elected to draft a “formal statement on the meaning of the Eucharist in the life of the Church.”

In response, liberal outlets like the New York Times accused the church of moving to “target” Biden, whom they consider an allegedly devout Catholic.

The decision, made public on Friday afternoon, is aimed at the nation’s second Catholic president, perhaps the most religiously observant commander in chief since Jimmy Carter, and exposes bitter divisions in American Catholicism. …

But the move to target a president, who regularly attends Mass and has spent a lifetime steeped in Christian rituals and practices, is striking coming from leaders of the president’s own faith, particularly after many conservative Catholics turned a blind eye to the sexual improprieties of former President Donald J. Trump because they supported his political agenda. It reveals a uniquely American Catholicism increasingly at odds with Rome and Pope Francis.

What are Democrats saying?

In response to the bishops’ vote, a group of 60 Catholic House Democrats issued a statement decrying any attempt to “weaponize” the sacrament.

We believe the separation of church and state allows for our faith to inform our public duties and best serve our constituents. The Sacrament of Holy Communion is central to the life of practicing Catholics, and the weaponization of the Eucharist to Democratic lawmakers for their support of a woman’s safe and legal access to abortion is contradictory. No elected officials have been threatened with being denied the Eucharist as they support and have supported policies contrary to the Church teachings, including supporting the death penalty, separating migrant children from their parents, denying asylum to those seeking safety in the United States, limiting assistance for the hungry and food insecure, and denying rights and dignity to immigrants.

But as HotAir’s Ed Morrissey noted, unlike the other issues the Democratic lawmakers listed, the Catechism “sets abortion apart as a particularly grievous break from the church, and it is the only departure in which excommunication is specifically prescribed.”

Still, at least one Democrat is taking the fight to another level.

California Rep. Jared Huffman tweeted Friday in response to the statement issued by the Democratic lawmakers that it might just be time to “rebuke” the Catholic Church’s tax-exempt status.

“If they’re going to politically weaponize religion by ‘rebuking’ Democrats who support women’s reproductive choice, then a ‘rebuke’ of their tax-exempt status may be in order,” Huffman threatened.

So far, Huffman has not indicted whether he believes the church should be forced to change its doctrine, considering the Code of Canon Law states, as the Christian Post pointed out, that those who are “obstinately persevering in manifest grave sin are not to be admitted to Holy Communion.”

Ex-judge in Las Vegas previously under ethics investigation dead of apparent suicide: ‘They have terrorized and lied about me’
Pfizer issues response to Project Veritas sting video, but critics characterize its statement as ambiguous
Mom chases off attempted carjacker who nearly drives away with her child in vehicle: Video
Rising rates of sudden death among youth prompt UK children’s schools to install thousands of defibrillators
CRIMINAL: JJ tried to create a new subsidiary to take all the liability from talc powder damage lawsuits, then declare bankruptcy to dismiss BILLIONS of dollars in trial awards