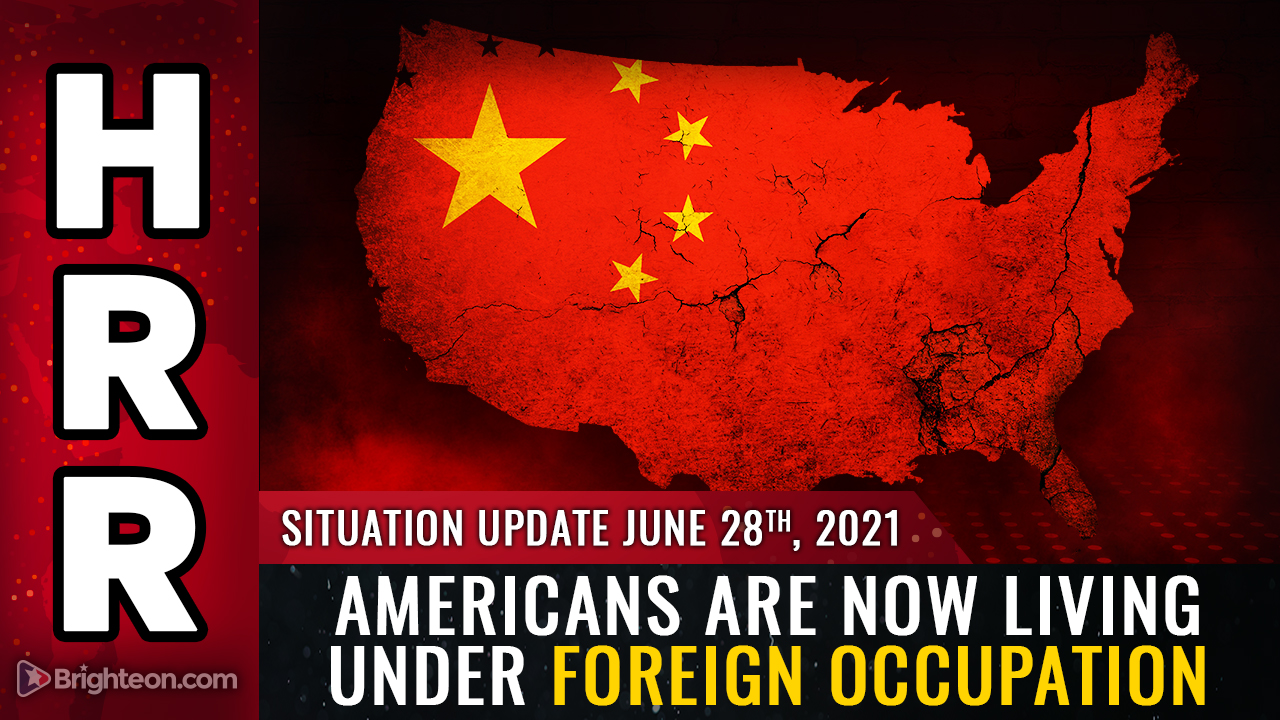 (Natural News)
What most people don’t yet understand is that they’re no longer living in “America.” What used to be America is now a nation under enemy occupation, ruled by authoritarian tyrants who were installed through election fraud and whose loyalty rests with the CCP (Chinese Communist Party). The Big Tech corporations all work for China, too, and the censorship they pursue in the USA mirrors the anti-freedom censorship of communist China.

CCP infiltration has compromised the Pentagon, Hollywood, universities, the mainstream media, big banks and consumer goods corporations. Nike’s own CEO recently declared that Nike is a company “of China and for China,” turning a blind eye to China’s deep human rights violations such as organ harvesting, torture of political dissidents and extreme surveillance of its own citizens.

When U.S. lawmakers attempt to criticize China over these actions, China correctly points out that the Biden regime supports censorship, too. And with the illegal arrest and detention of hundreds of peaceful protesters from January 6th, there’s a new “GITMO” in Washington D.C. where innocent Americans are being held as political prisoners, completely outside any legitimate sense of due process or the rule of law. If all this smacks of communist China, that’s because it’s patterned after communist China.

It should be no surprise that America is falling to totalitarianism, of course, since that course is being pushed by communist China which controls nearly every institution in the United States, including the CDC and a huge number of “science” journals. The WHO is run by the CCP, explaining why the WHO spent most of 2020 covering up the Wuhan Institute of Virology and the origins of the coronavirus bioweapon.

Anyone pretending that the leaders and institutions in charge of America are working to defend America is living in a dream world. In nearly every case, the people in power are now deliberately trying to dismantle the nation and see it obliterated.

To understand what happens next, you need knowledge of China’s plans for America

Since 1949, China has been on a hundred-year plan to establish its dominance in the world by eliminating its global competitors. For at least the last 50 years, China’s communist party has meticulously infiltrated nearly every U.S. institution, seeding its spies across every industry to steal intellectual property secrets in medicine, weapons technology, physics, biotech, computing, software and much more.

At the same time, China bribed U.S. officials with “joint venture” deals to make them rich while they transferred technology and manufacturing know-how to China under lucrative business deals. In this process, U.S. officials — such as the Bidens — compromised themselves, selling out America for their own financial gain while empowering communist China with the wealth and technology it would one day need to destroy the United States in its entirety.

By stealing intellectual property and bribing officials, the CCP managed to take over nearly everything in America, including most of the Senate (Feinstein, anyone?), the majority of state governors (Newcom, Brown, Cuomo, etc.), most of the media and now even the White House thanks to the rigged 2020 elections. Now, in order to finalize its occupation and takeover of America, China needs the American people to give up their guns so that a long-planned Chinese invasion can meet relatively little resistance from armed Americans.

The long-term goal of China has always been the complete extermination of every living American, followed by the colonization of the continental United States and its food / agriculture infrastructure to produce food products for export to China. By itself, China cannot produce enough food to feed its 1.4 billion people, and its reliance on food imports creates a strategic vulnerability that can be exploited by its geopolitical enemies. Thus, China needs to occupy and control large food-producing areas of the world, and the United States is No. 1 on that list.

Everything you’ve seen so far — the selling out of U.S. state secrets under Bill Clinton, George Bush, Barack Obama, Bush Jr., and now Joe Biden — is just the run-up to the “final solution” which is the complete extermination of the American people. The coronavirus bioweapon was unleashed in 2019 with the help of U.S. funding (NIH / Fauci, etc.) and U.S. technology (Chapel Hill, DARPA, Pentagon, etc.) as the opening salvo in the world war to take down America. Nearly everyone at the top of the Pentagon and at the top of the current illegitimate regime in Washington is actively engaged in treason to destroy America, and they are working with the CCP to accomplish this, believing that they will somehow be spared from the takedown of America.

America’s economy has already been crushed by the covid plandemic. The national debt is exploding to dangerous new heights. The CCP-controlled U.S. media are pushing race wars, and the corrupt FBI and deep state operatives are about to roll out a major false flag operation to try to vilify White people, gun owners, Christians and conservatives.

China wants America to tear itself apart from the inside, to soften up the nation before the planned land invasion. This internal strife will be augmented by cyber attacks on U.S. power grid infrastructure and the release of a second bioweapon with a far higher fatality rate.

The final step is nationwide disarmament of the American people

The final step before launching the land invasion of America is the nationwide disarmament of the American people. China and the globalists know that if they invade the USA right now, with 400+ million guns in the hands of the citizenry, they would be facing a guerilla war nightmare, with a rifle behind every blade of grass.

Thus, the Biden regime is working with the corrupt FBI and lawless DOJ to put together an epic false flag theatrical production that will be followed by emotionally-charged demands for nationwide gun confiscation, Australia-style. Any who oppose the confiscation will be labeled “domestic terrorists” by the same DOJ that has already put that narrative into play.

Importantly, if Americans refuse to turn in their guns, they will dissuade China from attacking the homeland. But if Americans turn over their guns by surrendering to the criminal regime currently in power, it won’t be long before those same Americans are executed by communist Chinese troops who are granted free reign in the USA by complicit governors like Newsom, and treasonous officials in the Pentagon, DOJ and White House.

Accordingly, protecting the Second Amendment isn’t merely about defending the right to own firearms; it’s about defending America against a planned communist invasion and occupation attempt that has been in the planning for decades.

Understand that any person who pushes gun confiscation is effectively working for the communist Chinese. They are complicit in acts of treason against America by deliberately attempting to weaken the nation into a state of vulnerability to foreign invasion and occupation. The Second Amendment is America’s best defense against attempted foreign invasions, and that’s precisely why the Second Amendment is under assault by the current regime.

Defend America or lose it forever

Very few people understand the reality of this threat. Dave Hodges at TheCommonsenseShow.com is one of those who gets it. Today, he writes:

Today, the Chinese threat has expanded to at least 250,000 CHICOM combat troops in British Columbia. We have the beginnings of CHICOM airfields being constructed in Texas for a high-ranking CHICOM officer. This is Red Dawn material which is also related to American concentration camps. Hold these numbers of CHICOMS in the back of your mind and I will refer to this real threat on a continual basis as it colors every fact and piece of evidence that I will be asserting this week. Yes, I have decided that it is critically important that I re-educate America on the topic of concentration camps (ie FEMA Camps).

Steve Quayle also understands the threat, as does JR Nyquist, whom I have interviewed several times. Our latest interview was posted just a few days ago:

With traitors like Mitt Romney in the GOP, and Senate leaders like Mitch McConnell having deep family ties to communist Chinese business interests, it may already be too late to save America from being physically overrun and completely wiped off the map.

On the other hand, there are numerous signs that China is suffering its own potentially catastrophic weaknesses and vulnerabilities and may end up destroying itself before it can destroy the USA. President Trump was actually on the right track with a trade war being waged against China, which helps explain why China deployed SARS-CoV-2 to try to remove Trump from power and install their own CCP puppet in the White House.

Right now, China is facing the possibility of mass starvation and internal political strife, combined with a potential financial implosion due to its Ponzi-like internal accounting practices and widespread financial fraud. Yet the USA is also steeped in debt fraud, political corruption and treasonous actors in positions of power — black hat actors who openly want to destroy the United States — so it’s difficult to know which nation destroys itself first. Add Russia into the mix and you’ve got “three scorpions in a jar,” to cite game theory. The outcome is impossible to predict.

Yet the one thing we do know very well is that if the American people give up their guns for any reason, it won’t be long before they are executed. We must learn from the Jews of World War II: Never surrender to an authoritarian, corrupt regime. After disarming you, they will come for you. And they are out for blood. They despise your very existence. Notice that here in America, CRT teaches that all White people are evil at birth and should be eliminated from society. CRT is racism / eugenics / genocide / Hitler, reanimated.

The “success” of the Biden administration, measured by the globalist puppets who run Biden’s handlers, will be the mass extermination of hundreds of millions of Americans, followed by the total collapse of the United States of America as a nation. That has been Barack Obama’s goal from the very start of his own treasonous presidency — now in its third term — and as we see with Critical Race Theory, it’s also the goal of nearly the entire lunatic left-wing base in America, populated by traitors who are demanding communism and Marxism, alongside the mass extermination of Whites. Yet somehow, they claim to be “tolerant” and “inclusive.” Go figure.

For the record, we do not espouse violence of any kind. We are urging people to prepare for violence to come to you, and be ready to survive the attempted “Final Solution” to take down America. This will require a defense of our nation against its enemies.

Find a new Situation Update podcast each day at: