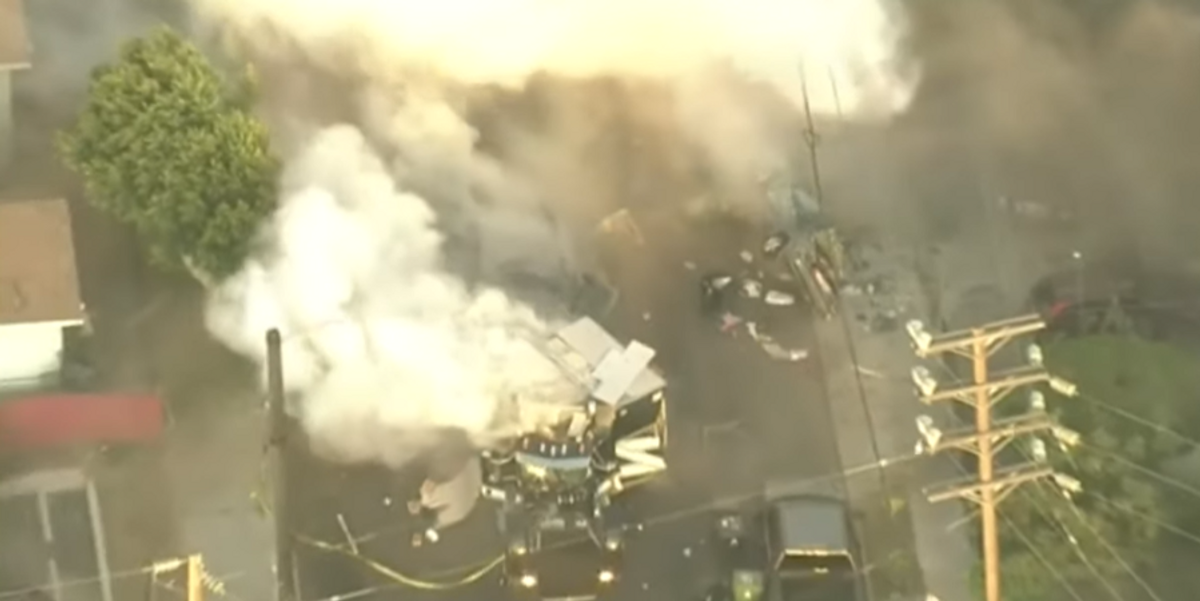 At least 16 people were injured, including police officers, when the Los Angeles Police Department’s bomb squad detonated explosives after seizing a massive stockpile of illegal fireworks on Wednesday. The large explosion flipped vehicles and damaged homes in the South Los Angeles neighborhood.

The LAPD seized 5,000 pounds of illegal commercial-grade fireworks from a home in South L.A. following a tip provided to law enforcement. The resident had a “cache of homemade fireworks” and “improvised explosives” at the house, according to the Sacramento Bee. Fireworks are illegal to sell or possess in Los Angeles.

The fireworks were in boxes marked with the words, “Made in China.” Authorities said the explosives posed an “imminent and real danger” to the community.

LAPD Chief Michel Moore said they planned to move the fireworks to a safe location with three box trucks and a 53-foot trailer, but the “improvised explosives” were too dangerous and “unstable” to transport.

Moore said there were 40 homemade explosive devices, which were the size of Coca-Cola cans, and 200 smaller explosives.

LAPD provided these photos of the homemade fireworks that were seized last night in South LA. They exploded during… https://t.co/kpFVhHMv8w

Less than 10 pounds of explosives were placed inside a total containment vessel, an iron compartment on a tractor-trailer designed to safely withstand explosions. The amount of explosives was reportedly far less than the vessel’s safety rating.

Shortly after 7:30 p.m. local time, the LAPD bomb squad detonated the explosives, which caused a blast so intense that it tore apart the total containment vehicle. The large explosion wrecked cars in the immediate area and caused damage to homes in the residential neighborhood.

Here is the moment the unexpected explosion happened in South LA. At least 9p eople were hurt after a bomb squad tr… https://t.co/D4n9sYF8e5

EXPLOSION! LAPD was disposing of illegal fireworks in South LA when the explosion occurred. At least 5 are injured.… https://t.co/jGSb8u01il

Fire Chief Ralph M. Terrazas said nine police officers and a federal Bureau of Alcohol, Tobacco, Firearms and Explosives officer were taken to hospital with minor injuries. There were also six civilians, ranging in ages from 51 to 85, rushed to a local medical center. One person was injured at the scene of the blast, but declined to be taken to a hospital. None of the injuries are believed to be life-threatening, according to authorities.

Prior to the explosion, police reportedly evacuated homes on both sides of the street where the explosives were detonated.

“This vessel should have been able to dispose of that material,” Moore said at a press conference. “You saw the resulting damage, and the total catastrophic failure of that containment vehicle.”

“Clearly, protocols were followed and pursued. But something happened in that containment vessel that should not have happened and we don’t know why,” Chief Moore said on Wednesday night. “But we intend to find out why.”

Moore said an investigation has been initiated, but could take several days.

Los Angeles Mayor Eric Garcetti (D) issued a statement on the explosion, “I’ve directed the LAPD to conduct a full investigation into this incident, so we can better understand why this happened. Illegal fireworks pose a great danger and can cost lives. We will prosecute those who use or possess them to the fullest extent of the law.”

CNBC reported that resident Arturo Cejas, 27, was arrested on suspicion of possessing a destructive device. Moore noted that Cejas may also face charges of child endangerment because his 10-year-old brother was in the home.