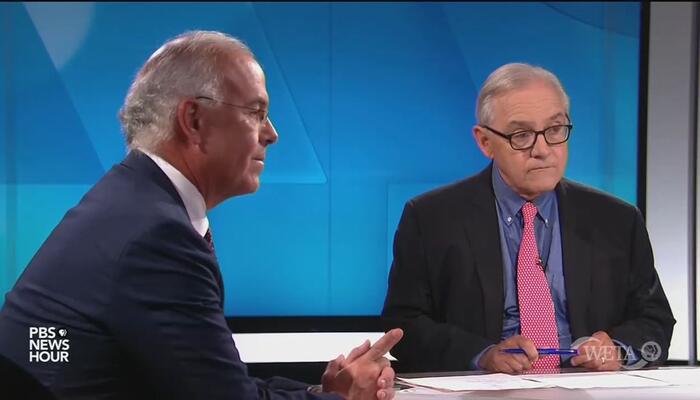 House Speaker Nancy Pelosi refused to let Republicans pick their own members for her Select Committee on the January 6 riot, making the panel look obviously stacked. But on the Week in Review segment of Friday’s PBS NewsHour, this was an unfortunate kerfuffle that should be overlooked. New York Times columnist David Brooks called any complaints about the stacking “90 percent BS.”

PBS anchor Judy Woodruff began by touting “very powerful testimony” from four Capitol Police officers who “spoke very movingly.” Then she added “you have Republicans who don’t want to be part of that committee — there’s still the anger over Speaker Pelosi about not — about taking Republicans off the committee. Is that effort going to lead to something productive?”

Washington Post columnist E.J. Dionne supported the stacking: “I think Nancy Pelosi made the right call in keeping off the committee people who were going to basically try to wreck the conversation. There were two Republicans there, Congressman Kinzinger and Congresswoman Cheney. They were great. They were clear. And I think this is going to be productive.”

Woodruff then turned to Brooks, who said most conservatives lost touch with reality:

WOODRUFF: You still though, do have, David, the Republican majority in the House, Kevin McCarthy, and everyone around him saying this is a travesty and starting to blame Speaker Pelosi herself for what happened on January 6.

….If I can get a little autobiographical, I came to Washington in 1985, the same year as a guy named Dinesh D’Souza, who was a conservative guy from Dartmouth, and I was from University of Chicago. And we used to go to brunch. And we were part of the same community of, like, conservative pundits and politicians.

I saw a segment of Dinesh D’Souza on YouTube today, which was him showing bits of the testimony, really emotional testimony, and Dinesh D’Souza is laughing at them for being wimps and cowards. And it was repulsive. And to think that I spent my career as part of, like, a community, and half of the community went off in the never-Trump world, which I did, and then the other half went completely bonkers, in my view.

And so Dinesh D’Souza is part of that community, and Tucker and all — Carlson — and all the people we grew up with. And so that’s in my little world. But that’s the Republican world, that you — people went off in radically different directions from where they were in the Reagan years. And that’s part of our national life. And I wonder where the elected officials, where they’re going to end up, because, eventually, you have to decide whether you’re going to be with Dinesh D’Souza or you’re going to be with reality.

Capitol Police officers should be thanked for defending the Capitol on January 6. But the Manichean pose here, that you are either “Never Trump” or detached from reality, is not serious. You can be appalled by the riot….and by Pelosi’s attempt to stack a committee and use the riot as a midterm-elections strategy.

Naturally, Dionne agreed with Brooks and offered the usual doom-saying about Republicans in 2022:

I think one of the depressing things, particularly about Republicans in the House, is that the vast majority are either there on the Dinesh D’Souza side or afraid not to be there. And that doesn’t bode well for the Republican Party in the long run.

And I think, politically, it’s not going to be good either, because the 2022 elections are going to be decided by turnout, yes, of the base, but in significant part by moderate people in the suburbs, many of whom swung to Biden. This Republican Party that doesn’t want to take on the violence at the Capitol, those suburban voters are not going to warm to that in 2022.

PBS: Running down the Republicans with Republican taxpayer money since 1969.

GAME OVER? Gaming Giant Sony Reportedly Caves to Abortion Crowd After Lib Media Whines
The CNN+ trainwreck somehow managed to get even more humiliating
Nebraska’s Republican governor says he will call a special legislative session to pass a total abortion ban if Roe v. Wade gets overturned
Squires: The Buffalo shooting was motivated by race hatred — and the media response is motivated by outrage inequity
Pants on Fire: CBS Shills Lie for Pro-Abortion Dems About Senate Vote