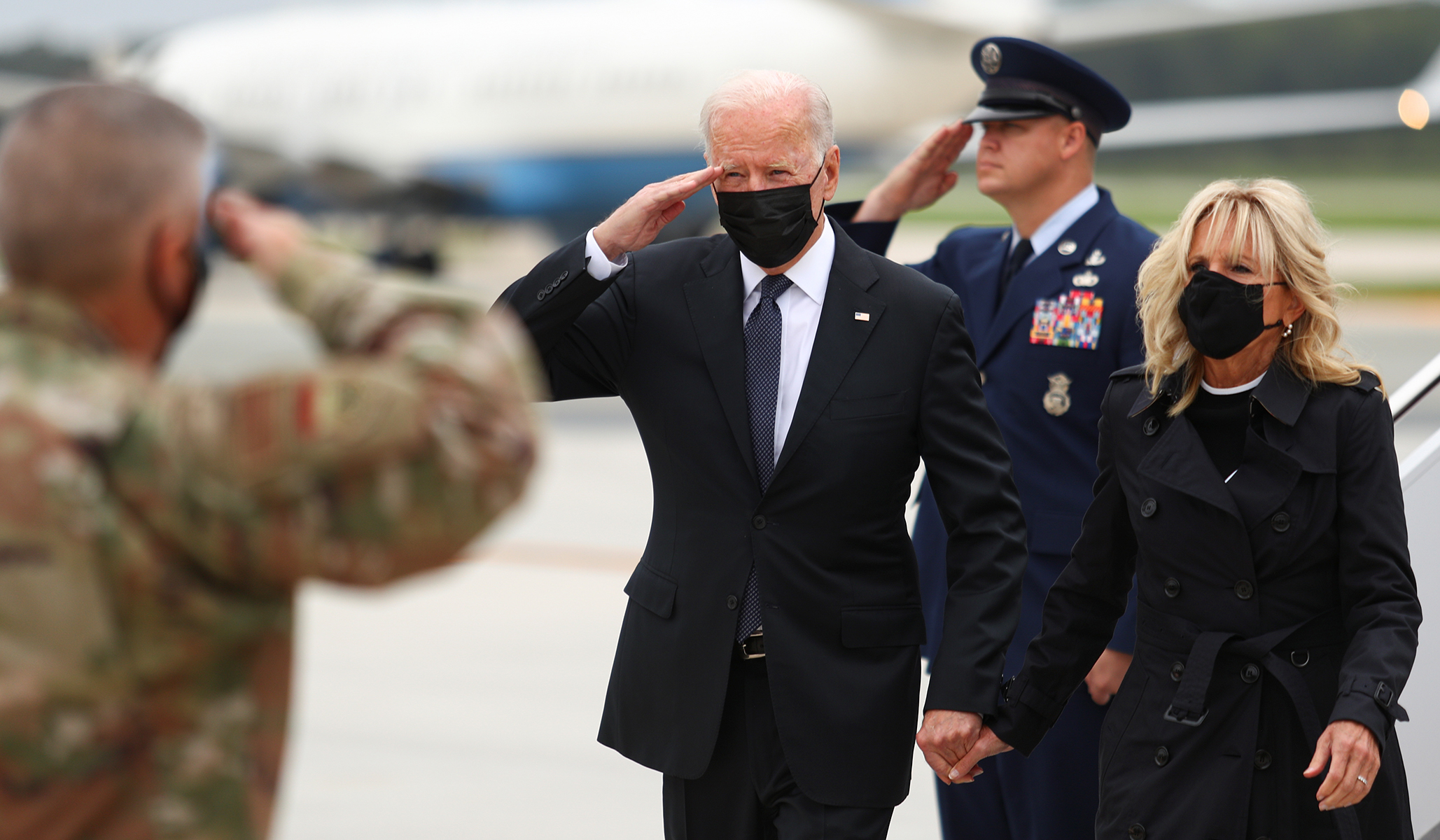 On the menu today: yesterday’s decision to withdraw the last U.S. troops from Afghanistan — despite the fact that American citizens were still stranded in the country, unable to get to the airport, and with many more green-card holders and Afghan allies now facing the brutality of Taliban rule. Meanwhile, President Biden gets snippy with a grieving father.

Afghanistan Proves That Biden’s Pledges and Promises Mean Nothing

A lot of people looked back at President Biden’s July 8 speech and remarks and ripped his prediction that, “The likelihood there’s going to be the Taliban overrunning everything and owning the whole country is highly unlikely.” But the president made a lot of other pledges and promises that day:

The drawdown is proceeding in a secure and orderly way, prioritizing the safety of our troops as they depart. . . .

We provided advanced weaponry. And we’re going to continue to provide funding and equipment. And we’ll ensure they have the capacity to maintain their air force. . . .

In our meeting, I also assured [President] Ghani that U.S. support for the people of Afghanistan will endure. We will continue to provide civilian and humanitarian assistance, including speaking out for the rights of women and girls. . . .

I intend to maintain our diplomatic [presence] in Afghanistan. . . .

We’re going to continue to work for the release of detained Americans, including Mark — excuse me — Fre– Frerichs — I want to pronounce the name correctly; I mis- — I misspoke — so that he can return to his family safely.

We’re also going to continue to make sure that we take on the Afghan nationals who work side-by-side with U.S. forces, including interpreters and translators — since we’re no longer going to have military there after this; we’re not going to need them and they have no jobs — who are also going to be vital to our efforts so they — and they’ve been very vital — and so their families are not exposed to danger as well.

Our message to those women and men is clear: There is a home for you in the United States if you so choose, and we will stand with you just as you stood with us.

Then, after Kabul fell to the Taliban, Biden sat for an interview with George Stephanopoulos and declared that, “If there’s American citizens left, we’re gonna stay to get them all out.”

All of those Biden promises are not just broken, they are smashed to pieces. Yesterday, General Frank McKenzie, commander of U.S. Central Command, admitted that, “Look, there’s a lot of heartbreak associated with this departure. We did not get everybody out that we wanted to get out. . . . I believe our Department of State is going to work very hard to allow any American citizens that are left — and we think the citizens that were not brought out number in the low — very low hundreds.” Late yesterday, Secretary of State Anthony Blinken said that, “We believe there are still a small number of Americans — under 200 and likely closer to 100 — who remain in Afghanistan and want to leave. We’re trying to determine exactly how many.” (This morning’s New York Times puts the number at “fewer than 300.”)

The drawdown was not made in a secure and orderly way. The “advanced weaponry” Biden discussed is in the hands of the Taliban. (A video appears to show the Taliban hanging a man from a captured Black Hawk helicopter.) Support for the Afghan air force had already been cut when Biden made those remarks. The U.S. is no longer able to provide civilian and humanitarian assistance, at least not without greasing the palms of the Taliban. The U.S. ability to “speak out for the rights of women and girls” is meaningless when the Taliban instructed women to stay in their homes “until the Taliban fighters accept women in public spaces.” The U.S. no longer has any diplomatic presence in Afghanistan. Mark Frerichs remains in Taliban custody. And the U.S. has abandoned tens of thousands of Afghan nationals who worked side-by-side with U.S. forces, including interpreters and translators.

Nothing the president promised or pledged mattered.

Nor is this complete withdrawal what Biden promised on the campaign trail:

Back in February 2020, then-candidate Biden declared on CBS News’ Face the Nation, “I think we should only have troops there to make sure that it’s impossible for the Taliban and excuse me- for ISIS or al-Qaeda to reestablish a foothold there, to be able to go from Afghanistan to the United States to attack the United States… a very small presence to be able to determine whether or not, I mean a small footprint — looks like several thousand people — to make sure that we have a place from which we can operate, if in fact, you find that there’s a re-amassing of Taliban capacity, excuse me, of al-Qaeda and or ISIS capacity to strike the United States like happened in 9/11.”

Osama bin Laden’s chief of security triumphantly returned to his home in eastern Afghanistan yesterday. Meanwhile, our ability to collect intelligence about terrorist groups in the country is seriously degraded:

“We’ve lost two things: we’ve lost our embassy — and the embassy of course is where we would have had intelligence collection ability — and we also lost our partner, which is the Afghanistan Intelligence Service,” Marc Polymeropoulos, a former CIA officer who was the base chief in Afghanistan between 2011-2012, told The Daily Beast. “They run spies as well to penetrate terrorist groups. On the human side we really are degraded.”

The degraded state of intelligence operations could leave the U.S. flying blind at the worst possible time — just as terrorism threats resurge in the region, says Daniel Hoffman, the CIA’s former chief of the Near East division.

Hoffman added that “the last thing” the Biden administration would want to admit is that Americans were more at risk because the military had pulled out of Afghanistan. “But we are,” he said.

Presidential stubbornness, and blind denial of inconvenient truths filters down through Biden’s administration. The Taliban spokesman felt the need to correct the assertion of the U.S. State Department that the Taliban and Haqqani Network are separate entities. General McKenzie said yesterday that, “I will tell you, the Taliban had been very, very pragmatic and very business-like as we have approached this withdrawal.” Elsewhere, the United Nations reports that the Taliban are also performing “summary executions of civilians and combat members of the Afghan national security forces,” but I’m sure they’re executing civilians in a “very pragmatic and business-like manner.”

Yesterday, Blinken laid out the plan for future diplomatic work with the new rulers of Afghanistan:

Going forward, any engagement with a Taliban-led government in Kabul will be driven by one thing only: our vital national interests. If we can work with a new Afghan government in a way that helps secure those interests — including the safe return of Mark Frerichs, a U.S. citizen who has been held hostage in the region since early last year — and in a way that brings greater stability to the country and region and protects the gains of the past two decades, we will do it.

ADDENDUM: Meanwhile, President Empathy struck again, while meeting with the families of the 13 servicemen killed in Afghanistan at Dover Air Force Base on Sunday:

So on that dreary morning [Mark Schmitz] and his ex-wife were approached by Biden after he’d talked to all the other families. But by his own account, Schmitz glared hard at the president, so Biden spent more time looking at his ex-wife, repeatedly invoking his own son, Beau, who died six years ago.

Biden did not seem to like that, Schmitz recalled, and he bristled, offering a blunt response: “I do know their stories.”

I got some grief for writing, “Something is wrong with the president” earlier this month. No, no, you’re right, guys, when the president of the United States is getting snippy with grieving parents at a memorial ceremony, he’s the pinnacle of mental, psychological, and physical health.