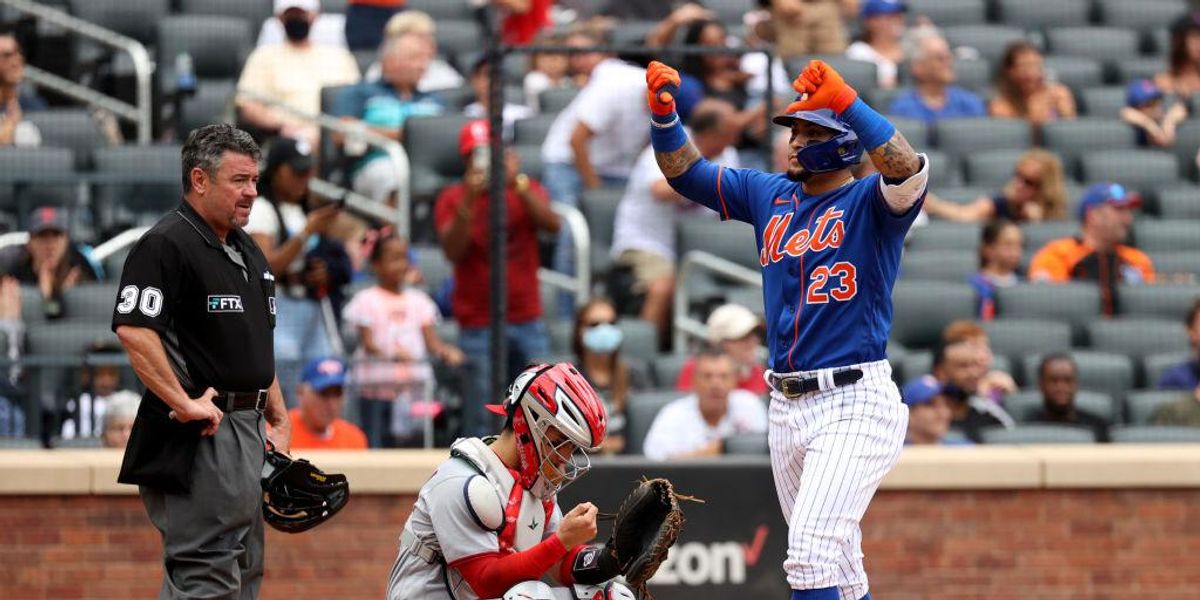 Javier Baez and the New York Mets might be on to something here, no matter how badly they’re being crushed for it. They’re rather unapologetic about it. In the past few days, they have introduced something new to the sports world. We’ll call it the “boo back.”

The Mets are in a late-season collapse, and their fans have taken up the time-honored sports tradition of booing. Baez, a $5-million-a-year second baseman, is the face of the players’ unique response to fan frustration. He’s leading the Mets and Major League Baseball in the boo back.

When the Mets hit a home run or get a big hit, the players hold both hands over their heads and give their fans the thumbs-down. The Mets are effectively booing back at their fans.

“It just feels bad when I strike out and get booed,” he said. “It doesn’t really get to me, but I want to let them know that when we’re successful, we’re going to do the same thing to let them know how it feels. In my case, they’ve got to do better.”

The fans have to do better? What a concept. Apparently, the players think fans are there for them and not the other way around. If Baez says it “feels bad” when he’s booed for striking out, he thinks the solution is to stop the booing, not the striking out.

I can’t tell for sure if this is an entitled generation thing, a pampered millionaire athlete thing, a COVID temper thing, or just a typical New York thing. It’s probably all of those added together.

It’s also a sign of the growing disconnect between athletes and fans. Colin Kaepernick polarized fans and athletes by taking a knee for the national anthem, turning that relationship into a political debate. Athletes lead lives the typical American sports fan dreams about, but athletes are now seen as some of America’s harshest critics.

The boo back could be the new high five, a symbol of unity among athletes in their disconnect from the fans.

The high five has several different origin stories. Magic Johnson once seemed to take credit for it. The most accepted story is that it started in 1977, when Dusty Baker of the Los Angeles Dodgers hit a home run off Houston Astros pitcher J.R. Richard. Baker rounded the bases, and his teammate met him at home plate with his hand over his head. Baker, not knowing what to do, slapped it. Baker is now the Astros’ manager.

The high five grew into the mainstream, of course. And the boo back might be next.

I’m thinking about Naomi Osaka, who pulled out of two major tennis championships this summer, including Wimbledon, because she didn’t want to have to answer reporters’ questions. She somehow turned it into a discussion of mental health, when really it was about wanting complete control over all messaging and not feeling she should be subjected to criticism, which makes her feel bad.

The Mets can’t comprehend that the fans aren’t just there to tell them how great they are. The fans, the press. Why are they so mean?

Osaka melted down over this, and her career as one of the world’s great tennis players might be in jeopardy.

Osaka should boo the media next time she doesn’t like their questions. Maybe the boo back will give her the release and voice she needs.

The world is clearly in a different head space now than it was pre-COVID. Fans are fighting more in the stands, traffic deaths from road rage are at record highs, and there is just this palpable sense of anger.

Years ago, the movie “Network” had people opening windows and screaming, “I’m mad as hell and I’m not going to take it any more.” Isn’t the boo back more civil?

My daughter, Jenny, is an actor and also a server at a restaurant near Wrigley Field in Chicago. She texted me a few nights ago that four customers had sat at a table for two hours having eight cocktails, four bowls of ramen, and three appetizers, racking up a $215 bill. And then they left a $5 tip.

I told her what Baez, one of her favorite ex-Cubs, and the Mets had done. Isn’t that terrible?

But isn’t the customer always right? Should actors on stage boo back when an audience is upset? Could you justify following your customers out the door when they leave a bad tip, booing them?

“I wish I did,” she said. “The customer is frequently extremely rude, too, and doesn’t seem to realize that staff are people, too.”

Yes, but the staff is being paid. And if the staff’s performance — or Baez’s and the Mets’ batting average — isn’t worth the cost of what customers are paying for it, then the customers want to express that.

“It’s not as if Baez is heckling the fans,” she said. “It’s just a thumbs-down.”

The look-at-me generation has finally invented something useful. In a time when people are angry and impatient, mad as hell and trying to make up for lost time, the boo back is just a peaceful protest. It’s a real-life emoji.