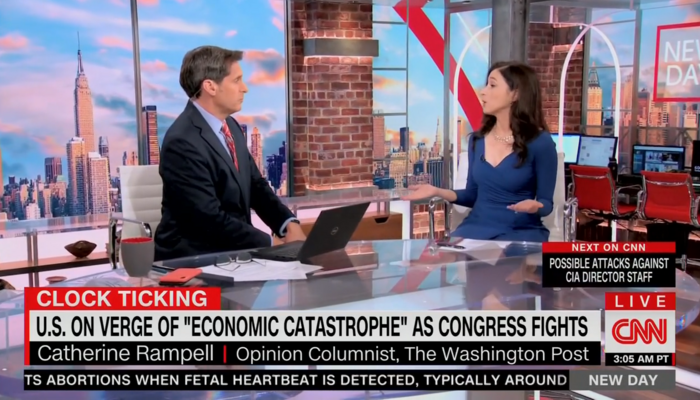 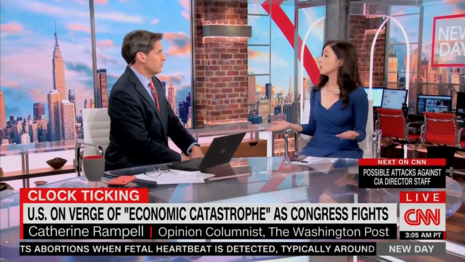 Talk about liberal fear-mongering by CNN!

Rampell said that “nihilistic” Republicans, by potentially refusing to join in on raising the debt limit, “could set off a worldwide financial crisis…. panic through every financial market in the world.”

The Princeton alum went so far as to claim that Mitch McConnell “is basically happy to let the world burn as long as Democrats take the fault.”

But as Rampell acknowledged, Democrats don’t actually need any Republican votes to raise the debt limit! They can do it on their own by tying it to their $3.5 trillion “infrastructure” bill.

So one way or another, the debt limit will be raised. But Rampell still whined that Democrats “always have to be the grown-ups on this.” Note: NB’s Lydia Switzer caught Rampell making the same kvetch a few days ago. Are “grown-ups” those responsible people who spend trillions of dollars of money that aren’t theirs and put their descendants into deep debt?

Even Mitt Romney—hardly a far-right bombthrower— has said of the debt limit:

CNN’s segment was nothing more than political theater: fear-mongering designed to boost the Democrats and blame the Republicans.

CNN’s scaremongering on the debt limit in which its commentator claimed that Mitch McConnell “is basically happy to let the world burn as long as Democrats take the fault,” was sponsored in part by Liberty Mutual, Noom, IHOP, and Subaru.

CATHERINE RAMPELL: The biggest one, I would argue, is that it could set off a worldwide financial crisis. And that’s because right now, U.S. debt is considered the safest of safe assets, basically risk free. If we prove that we are not a reliable borrower, and all other assets are kind of benchmarked to our debt as being the safest of safe, then that can set off panic not only through treasury markets but through every other financial market in the world.

BERMAN: That all sounds incredibly bad. Like an economic catastrophe, as Janet Yellen says.

Look, this almost happened but didn’t in 2011, 2013. Why is there reason to believe it could happen this time?

RAMPELL: Well, Republicans held it up in the past, and we got to this sort of brinksmanship period, where we almost hit and crisis and then didn’t.

The Republican party has gotten only more nihilistic since then, I would argue.

BERMAN: And Democrats say, look, we voted to suspend or extend the debt limit when Trump was in office. How come you’re not doing this now when there’s a Democratic president? You say to that, yeah, but.

RAMPELL: I mean, it’s true. Of course, Republicans are being hypocritical here. They should take their own share of responsibility for the fact that, again, this is paying for bills already owed. This is not authorizing new spending. But Republicans don’t seem to abide by any principle here. They don’t care that Democrats staved off default in the past, that they’ve joined in with Republicans to suspend the debt limit. I think Mitch McConnell is bascially happy to let the world burn as long as Democrats take the fault.

BERMAN: And you think Democrats are going to have to do it?

RAMPELL: I think they have to. I understand their frustration. I know they think it’s unfair that they always have to be the grown-ups on this. But Republicans have proven that they don’t care. They don’t care if we’re on the brink of default and possible financial crisis and raising our borrowing costs for the rest of time, which is another possible consequence of all of this.