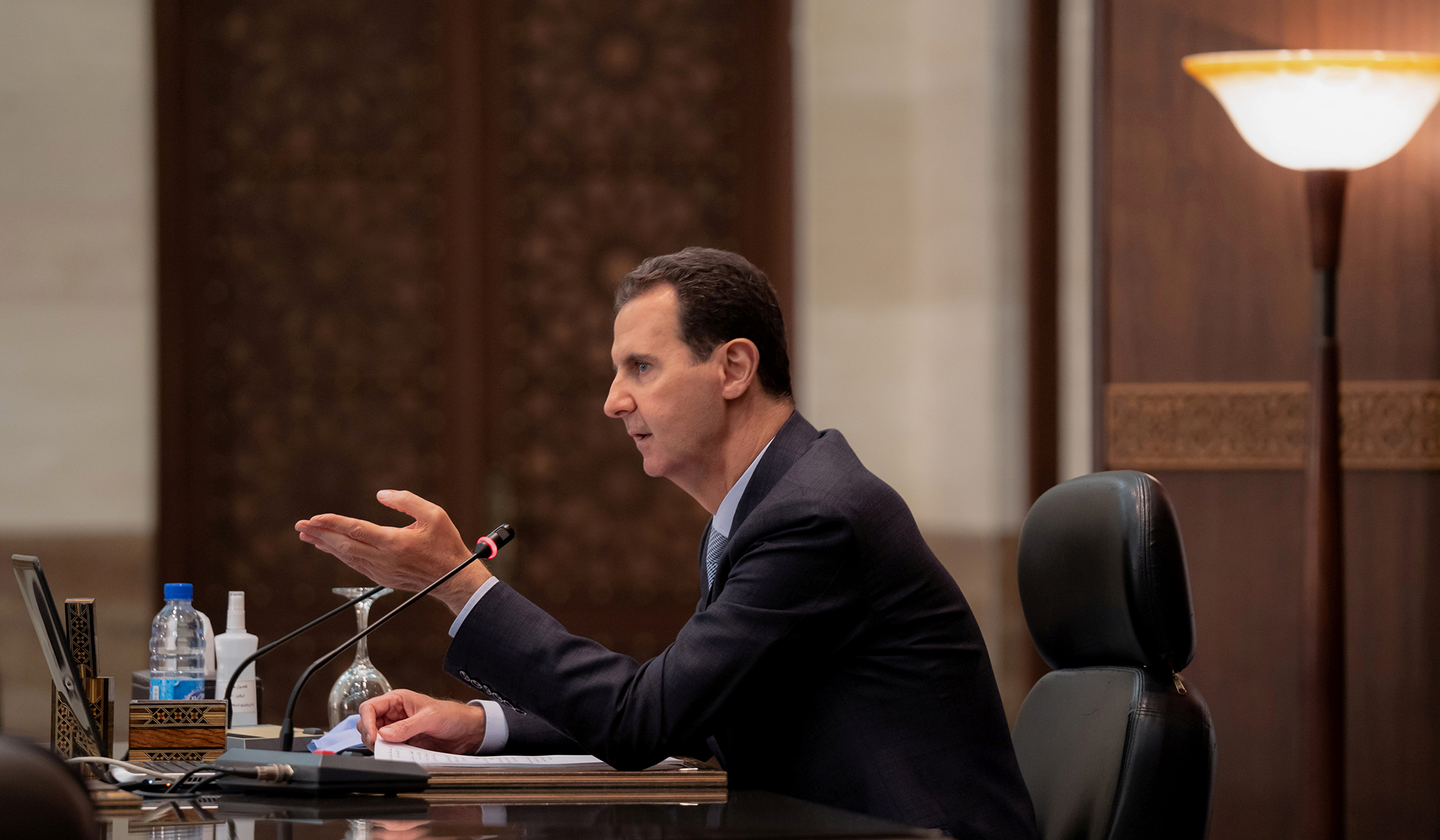 On the menu today: In addition to serving up policies of capitulation and acquiescence to the Taliban, China, and Russia, President Biden and his administration are sending signals that they’re willing to accept the normalization of the chemical-weapons-using, war-crime-committing Bashar al-Assad regime in Syria; Biden says that his purpose is to demonstrate that “democracies deliver for their people”; and now we know what Secretary of Transportation Pete Buttigieg has been doing for the past two months.

What you probably didn’t know is that the Biden administration is acquiescing to an effort to normalize the chemical-weapons-using, war-crime-committing Assad regime in Syria as just another government.

Ilan Berman, the senior vice president of the American Foreign Policy Council, wrote in Newsweek on Monday that, “Over the past eight months, the new administration has progressively scaled down the U.S. commitment to isolating Syrian dictator Bashar al-Assad or imposing costs on his brutal regime for its domestic abuses of power.”

Charles Lister, a senior fellow and the director of the Syria and Counterterrorism and Extremism programs at the Middle East Institute, wrote in Foreign Policy a week ago that, “U.S. President Joe Biden’s administration has also adopted a largely hands-off approach to Syria. And although the Biden administration itself may not be welcoming Assad back into the fold with open arms, it has clearly left open the door for others to do so — shattering international norms and rewarding the 21st century’s most notorious war criminal with a rebirth.”

Josh Rogin, writing in the Washington Post last week, said that, “Ever since he met President Biden at the White House in July, Jordan’s King Abdullah II has been leading a rapid regional normalization of the Bashar al-Assad regime. This runs counter to U.S.-Syria policy and counter to U.S. law. But the Biden administration has decided it no longer will actively fight this trend. The consequences could be disastrous.” Rogin quoted an unnamed administration official who said that the Biden administration will no longer actively work to stop countries from engaging with Assad, except when the law specifically requires it to do so.

I have been alarmed by recent reporting that the U.S. is supporting efforts by Arab states to normalize relations with the Assad government, including a partnership between Jordan and Egypt to deliver natural gas to Lebanon through Syria, something sure to enrich Assad and his allies. I urge the Administration to remain strong in his commitment to defending human rights, and that must include keeping Assad isolated. We cannot tolerate leaders who murder their own people, and the U.S. must oppose any efforts to normalize relations with Syria until those responsible for these atrocities are out of power.

Michel Duclos, writing over at the Atlantic Council, said:

Syria does not constitute a priority for the Joe Biden administration, which has sent mixed signals about implementing Caesar Act sanctions. . . . If the Assad regime ultimately prevails, it will resume its habit of destabilizing the region, where terrorism will find fertile terrain for a new surge. There is at least one common factor between Syria and Afghanistan: just as the Taliban has not changed once it took back power, the Assad regime will not change once its power is affirmed.

For what it’s worth, Secretary of State Antony Blinken says the administration does not intend to support any efforts to normalize ties with Assad or rehabilitate him “until there is irreversible progress towards a political solution in Syria.” But then again, Blinken says a lot of things. So far, there’s no indication that the administration is willing to expend any effort to resist or push back against the normalization of Bashar Assad.

In fact, the Biden administration is already lifting some sanctions and working with the Assad regime: “The Assad regime and the United States say that they are prepared to co-operate on a plan to rescue Lebanon’s electricity supply, in an indication of another shift in Middle East politics led by President Biden. Syria was ‘ready to help’ with the plan to import Egyptian gas via Jordan and Syria, a Damascus official said after a visit by Lebanese ministers.”

Yet another Biden-blessed pipeline deal that will work to benefit a brutal dictator.

This isn’t “realism.” This is being a wimp and counting on your allies in the media to hail it as wise and discerning. Biden and his team are consistently sending signals that they desperately want to avoid any kind of conflict — military, diplomatic, geopolitical — and will go along with whatever anyone else wants to do.

Yesterday, Biden celebrated that the United States was elected to serve on the U.N. Human Rights Council for a three-year term, joining the ranks of humanitarian heroes such as the governments of China, Cameroon, Eritrea, the United Arab Emirates, and Venezuela. You may recall that former U.S. ambassador to the United Nations Nikki Haley declared in 2018 that, “The Human Rights Council has been a protector of human rights abusers, and a cesspool of political bias.” Council members are supposed to “uphold the highest standards in the promotion and protection of human rights” at home and abroad and “fully cooperate with the council,” but the brutal regimes never do, and they never even get tossed off the council for it.

While taking a victory lap after the U.S. won the noncompetitive election to the post, Biden declared that:

The United States stands ready to work with partners and allies to help lead the world toward a more peaceful, prosperous future, grounded in respect for human dignity. Together, we will stand up for the rights of all, including women and girls, members of LGBTQI+ communities, members of ethnic and religious minorities, those living with disabilities, and members of other marginalized groups. We will promote accountability for governments that abuse human rights. And we will stand in solidarity with, and continue to work tirelessly in support of, the activists, human rights defenders, and peaceful protestors on the front lines of the struggle between freedom and tyranny.

You read that and wonder . . . where? In Afghanistan? China? Russia? Syria? Just where is the Biden administration promoting “accountability for governments that abuse human rights” or “standing in solidarity with activists and human rights defenders”?

Let’s Avoid Delivery Metaphors for a While, Mr. President

Also in his remarks yesterday, President Biden declared that, “Defending human rights and demonstrating that democracies deliver for their people is a fundamental challenge of our time.”

Every presidency is going to have its challenges, and no president is perfect. But does it feel as if the Biden administration and the broader U.S. government is “delivering for its people” lately? I mean, at this point we literally can’t get goods delivered where they need to go. We have nearly 11 million unfilled jobs, about 4.3 million more people are missing from the workforce since before the pandemic, inflation is raging, we still have Americans trapped in Afghanistan, home heating bills are going to be much higher this winter. . . .

What has the Biden administration “delivered” so far?

On Wednesday I wrote: “A worsening backlog of cargo and freight at American ports is the kind of problem the federal government is supposed to detect early on, isn’t it? Pete Buttigieg didn’t cause the worsening backlog of cargo at our ports, but . . . isn’t that the sort of thing a Secretary of Transportation is supposed to keep an eye on? What’s he been doing all this time?”

Asked . . . and answered, via Politico: “They didn’t previously announce it, but Buttigieg’s office told West Wing Playbook that the secretary has actually been on paid leave since mid-August to spend time with his husband, Chasten, and their two newborn babies.”

The dad in me is glad that Buttigieg is getting some irreplaceable quality time with his children.

The reporter in me observes that it is now mid October, and if the head of a federal department is going to be away from the office for two months while a major problem is getting worse . . . would it have been better if someone else had been named the acting secretary for the duration?

ADDENDUM: A listener to the Three Martini Lunch podcast observes that he had “a Planned Parenthood ad tacked on the end of my download. Good job getting them to pay money to a demographic least likely to use their services.” Honestly, I can’t think of a better way for Planned Parenthood to spend their donors’ money.

The Left’s Obsession With Political Proselytizing at Thanksgiving Is Weird and It Should Stop
Rand Paul, Ted Cruz roar back at Dr. Fauci, who claims criticism of him is ‘dangerous’ because ‘I represent science’
Matthew McConaughey Announces He Will Not Run For Texas Governor (VIDEO)
NEW NewsBusters Podcast: Media Barely Touching Sexual Harasser Andrew Cuomo
Doocy Stuffs Psaki’s Gobbles Over Biden in Nantucket, Rittenhouse, Thanksgiving