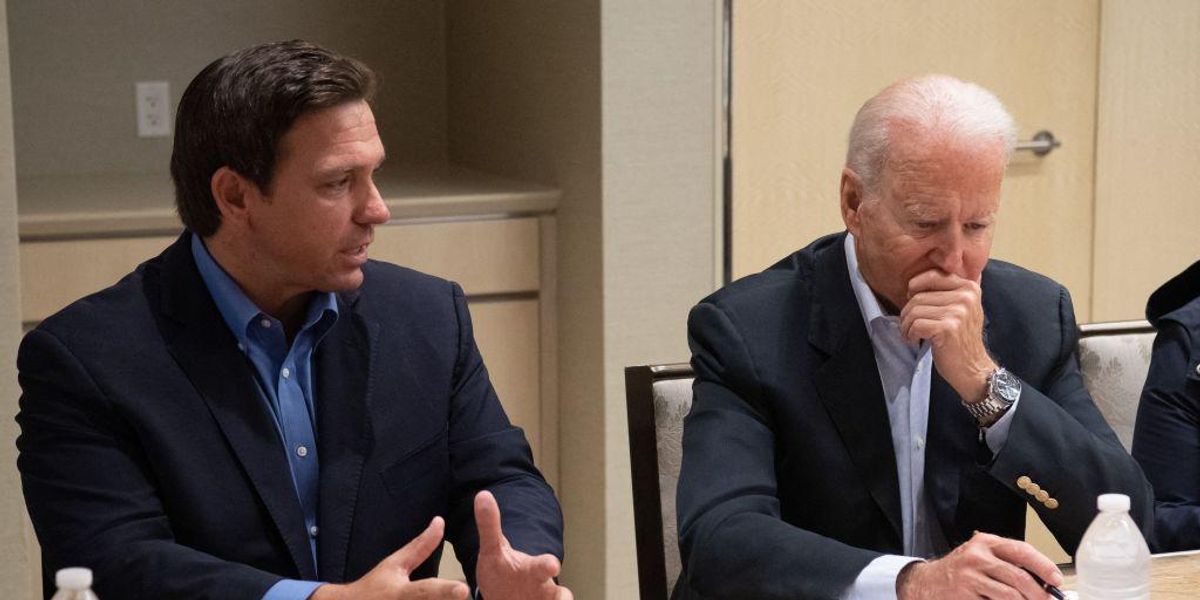 Florida Gov. Ron DeSantis hammered President Joe Biden this week over the federal COVID-19 vaccine mandates. The Republican governor of Florida vowed to sue the Biden administration over the vaccine mandate, and proclaimed that it is “fundamentally wrong to be taking people’s jobs away,” especially after they worked during the deadly pandemic.

“Let’s not have Biden come in and effectively take away — threaten to take away — the jobs of people who have been working hard throughout this entire pandemic,” DeSantis said during a Thursday press conference on monoclonal antibody treatments in Fort Myers, Florida. “I am offended that a police officer could potentially lose their job.”

DeSantis maintained, “We have a responsibility at the state level to do whatever we need to do to protect Floridians from mandates that could result in them losing their jobs. We have to protect the jobs of Floridians.”

DeSantis highlighted the health care workers who worked on the frontlines during the pandemic — the same workers that Biden previously called “heroes” — who would lose their jobs because of Biden’s vaccine mandate.

“I just think its fundamentally wrong to be taking people’s jobs away particularly given the situation that we see ourselves facing with the economy where you need people in a lot of these key areas,” DeSantis remarked. “What’s going to happen with these hospitals if these mandates are allowed to go in, where they already need more nurses?”

At another news conference on Friday, DeSantis continued to skewer Biden’s vaccine mandate. DeSantis picked apart Biden’s comments from this week, where the president said the vaccine mandates shouldn’t “divide us.”

Biden said on Thursday, “Let’s be clear: Vaccination requirements should not be another issue that divides us. That’s why we continue to battle the misinformation that’s out there and companies and communities are stepping up as well to combat this misinformation.”

“You are taking away their livelihoods. Nobody else is doing that. You are the one that’s being divisive about this,” he stated.

“No one should lose their job over these shots,” DeSantis stated. “I think we want to protect people’s jobs. These are folks that have been working throughout this whole time. They were put in situations where they were exposing themselves to risks knowingly to help others, and they did that, and we considered them heroes just a year ago. Now you’re going to let them go by the wayside?”

Florida Gov. Ron DeSantis on opposing Biden’s mandate: “No one should lose their job over these shots. I think we w… https://t.co/z5P2skviqU

DeSantis pledged to sue the Biden administration over a forthcoming rule requiring private businesses with 100 workers or more to force their employees to be vaccinated against COVID-19. The Occupational Safety and Health Administration-enforced rule would reportedly affect more than 130,000 U.S. businesses and apply to roughly two-thirds of the private sector workforce.

“We are going to contest that immediately. We think the state of Florida has standing to do it and we also know businesses that we’re going to work with to contest it,” DeSantis said. “I think the mandate is going lose in court.”

DeSantis said that Florida-based lawsuits against federal vaccine mandates will be filed in the 11th U.S. Circuit Court of Appeals.

“The COVID-19 vaccine is safe, effective, and our best defense against the virus, but should remain voluntary and never forced,” Abbott said in a statement.

On Tuesday, the White House stressed that the Biden administration would push for a nationwide vaccine mandate despite Texas and Florida opposing them.

“These requirements are promulgated by federal law, so when the president announced his vaccine mandates for businesses — that, of course, we’re waiting on OSHA regulations for as a next step — that was pursuant to federal law,” White House press secretary Jen Psaki said.

“Our intention is to implement and continue to work to implement these requirements across the country, including in the states where there are attempts to oppose them,” she added.

“Governor Abbott’s executive order banning mandates and, I would also note, the announcement by Gov. DeSantis this morning essentially banning the implementation of mandates, fit a familiar pattern that we’ve seen of putting politics ahead of public health,” Psaki claimed.

“Our intention is to implemen… https://t.co/YaDh6tnaB1

Biden says fight against Omicron variant will not include ‘shutdowns or lockdowns’
The Only Medical Test That Matters Is the One President Biden’s Doctor Did Not Perform
Liberal Oakland mayor blames ‘defund rhetoric’ for surge in violent crime: ‘Oakland needs more police!’
Women’s Tennis Association cancels all tournaments in China and Hong Kong over disappearance of Peng Shuai
Salvation Army goes woke with​ new anti-racist message, asks white donors to apologize for their ‘unconscious bias’