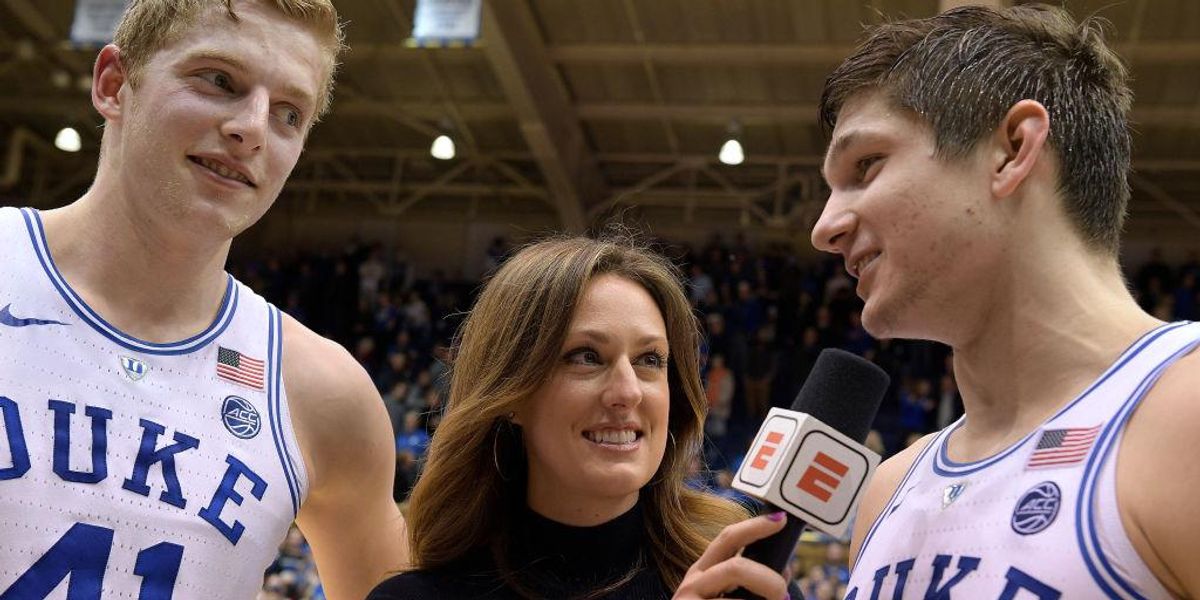 Veteran sports reporter Allison Williams went into depth on her decision to defy ESPN’s vaccine mandate – which will result in her departure from being on the sidelines of the biggest college football and basketball games.

Williams noted that she requested an exemption from the company’s vaccine mandate, but ESPN and its parent company Walt Disney Company denied her request for an accommodation.

“Effective next week I will be separated from the company,” she said in the video posted on her Instagram account.

Williams, 37, is attempting to have a second child with her husband but is experiencing fertility issues. Last month, Williams said she consulted with a doctor and a fertility specialist – which led her to decide “not to receive the COVID-19 vaccine at this time while my husband and I try for a second child.”

Williams delivered an emotional explanation as to why she will not get the COVID-19 vaccine at this time despite it costing her a job of a lifetime. She first thanked everyone who reached out to her because it brought in light during a “really dark and difficult time.”

“Belief is a word I’ve been thinking about a lot lately, because in addition to the medical apprehensions regarding my desire to have another child in regards to receiving this injection, I am also so morally and ethically not aligned with this,” Williams said of the vaccine mandates.

“And I’ve had to really dig deep and analyze my values and my morals, and ultimately I need to put them first,” she continued. “And the irony in all this is that a lot of these same values and morals that I hold dear are what made me a really good employee, what helped with the success that I’m able to have in my career.”

Williams called out her employer, “Their values have clearly changed.”

“Ultimately, I cannot put a paycheck over principle,” she declared. “And I will not sacrifice something that I believe and hold so strongly to maintain a career.”

“A lot of people have brought up the moral obligation receiving the vaccine is to being a good citizen. And I weighed that, and I thought about the implications,” she added. “We all want to be good neighbors. We all want to end this pandemic. But ultimately, an injection that does not stop transmission and spread for me, does not weigh in morally.”

Williams reflected on all of the other Americans who will lose their jobs because of the vaccine mandates.

“So I want to just say that I know I’m not the only one walking away from a career they love, a profession that is a passion,” she said. “And so many people that are in the same situation as me, serving society and benefiting this country in ways I could never do, they are nurses, they are teachers, they are doctors, they are police officers, and first responders, and they are most importantly our military, and pilots. And they too are choosing to put their beliefs first. And I just want you all to know I stand with you.”

Williams then said she supports everyone who wants the vaccine mandates.

“Because if this is the direction we take our country, there will come a time when the government or corporations mandate you to get something that does not align with your values,” she explains. “Power given is seldom returned. And when that day comes, I want you to at least know that we fought, and we tried.”

“I don’t know what the future holds, obviously, for any of us. I’m trying to wrap my head around the thought that the largest game I’ve worked in my career, the national championship game, might be the last game I work,” Williams says as she fights back tears. “But I’m going to focus on what I have to be thankful for. I’m going to hold on to my faith. I’m going to pray that things get better, and that I can see you on the television set in some capacity, in some stadium, covering some game soon. Until then, God bless, and I’m going to go hug my baby.”

Previously, ESPN was asked about Williams’ vaccination status and the sports network said it would not “comment on an individual.” ESPN did release a statement that read, “We are going through a thorough review of accommodation requests on a case by case basis, and are granting accommodations where warranted. Our focus is on a safe work environment for everyone.”

Flash mob robberies set to explode across America as mass money printing drives the poor into desperation
Los Angeles firefighter allegedly pulled down his pants and wiped his butt with a vaccine mandate order
Friends in High Places
Gov. Kathy Hochul declares ‘disaster emergency’ in New York until mid-January over omicron despite no cases of new variant in the US yet
Jury Selection Begins in Jussie Smollett Case More Than Two Years after Hate Crime Hoax