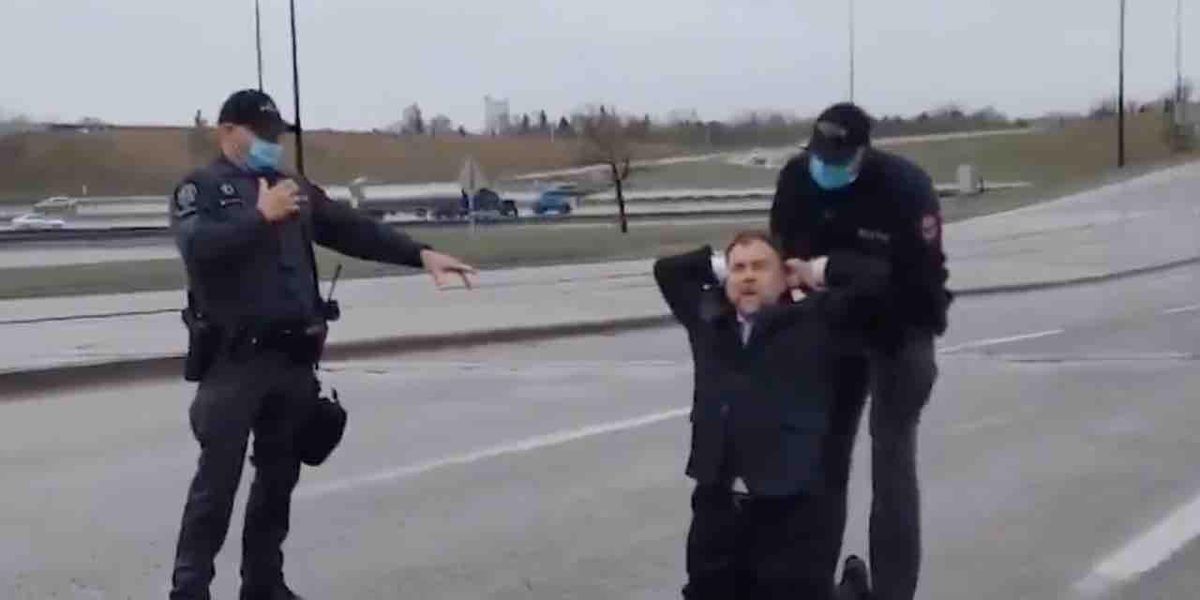 A Canadian judge ordered that Pastor Artur Pawlowski — who went viral this year for
kicking “Nazi” police officers out of his church and after his arrest for holding a service in defiance of COVID-19 mandates and getting cuffed again last month on a Calgary International Airport tarmac reportedly for contempt of court — must preach “science” as part of his problematic sermons, the Canadian Broadcasting Corporation reported.

In addition to paying a $23,000 fine, obeying all COVID-19 mandates, clocking 120 hours of community service at a homeless shelter, food bank, or charity — no, his ministry work doesn’t count — Pawlowski also must place on the record the scientific side of the COVID-19 debate if he continues to preach about the issue over the course of his 18-month probation, the CBC said.

The judge even suggested a script for future sermons, the outlet said: “I am aware that the views I am expressing to you may not be held by medical experts … the majority of medical experts favor social distancing … vaccine programs.”

More from the outlet:

Throughout the pandemic, the Pawlowskis repeatedly hosted and promoted large, maskless gatherings for church services in Calgary and also denied health officials entry to their church in Dover, a neighborhood in southeast Calgary.

Attempts by AHS inspectors to enter the church were met with abusive language.

The Pawlowski brothers turned their arrests into a “spectacle,” said Germain, adding it was clear during sentencing submissions that Artur issued a “taunt” to the court hoping for more jail time.

“It is not an unreasonable observation that the Pawlowskis reveled in their arrests and went out of their way to make their arrests the Saturday night news spectacle that it became,” Germain added, according to the CBC. “He has a fervent desire that I martyr him.”

Pawlowski made headlines in April after he recorded a video of himself kicking health officials and police out of his Calgary church who were there to enforce mask mandates.

“Do not come back you Nazi psychopaths! Unbelievable sick evil people! Intimidating people in a church during the Passover!” he says in the clip. “You Gestapo Nazi communist fascists!”


Polish Pastor Chases Cops Out of Church on Easter Weekend: ‘Get Out! You Nazis!’

In May, he was arrested after holding a church service where “dozens were congregating without masks, with no regard for physical distancing,” according to the Calgary Herald.

Later that month, arsonists reportedly tried to burn down Pawlowski’s garage while his family slept.

Then came his September arrest on the Calgary airport tarmac after a trip to the United States:

Several weeks ago, John Siddons — a lawyer for Alberta Health Services — said Pawlowski should be jailed for 21 days for flouting a court order that he comply with COVID-19 public health mandates, the Herald said in a separate story.

Pawlowski was found guilty of contempt for refusing to allow a provincial health employee access to his church April 24, which the paper said led to the AHS civil action.

Siddons said videos of the pastor defying and expressing disgust with the powers that be demonstrate his contempt and are “aggravating factors,” the Herald said.

“It speaks to Artur Pawlowski’s lack of contrition … if this evidence is inflammatory, it’s merely the result of Mr. Pawlowski’s own rhetoric,” Siddons also told the paper.

Most recently Pawlowski issued a warning to America: The tyranny the world is seeing in Canada is coming for the U.S. if the nation does not “rise up.”

And he also spoke to Glenn Beck on Tuesday: