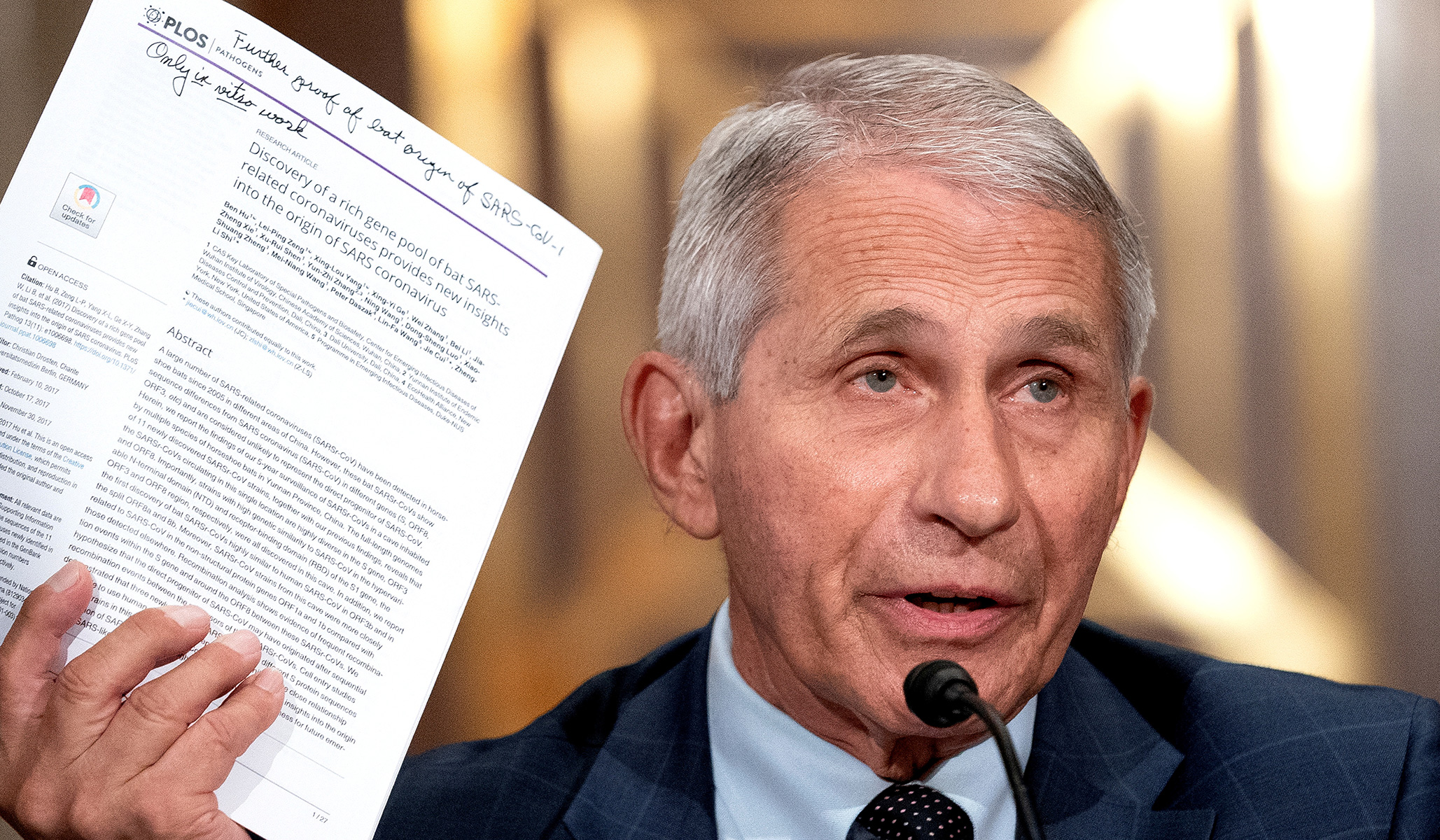 A Wednesday letter from top NIH official Lawrence Tabak revealed that Dr. Anthony Fauci was wrong — and Senator Rand Paul was right: The NIH did fund gain-of-function viral research at the Wuhan Institute of Virology through the U.S. research non-profit EcoHealth Alliance.

According to Tabak, a “limited experiment” funded by the NIH, and carried out by EcoHealth Alliance, was conducted to see if “spike proteins from naturally occurring bat coronaviruses circulating in China were capable of binding to the human ACE2 receptor in a mouse model.” The altered virus made the mice it was tested in “sicker,” according to Tabak’s letter.

Fauci and Paul have sparred over Paul’s contention that the NIH had, through a grant issued to EcoHealth, funded gain-of-function research on coronaviruses at the Chinese lab. Paul’s argument, that NIH money was used to make bat coronaviruses more dangerous and/or transmissible in humans, has now been confirmed. And Fauci’s argument, that the research being done doesn’t constitute “gain-of-function” under the NIH’s narrow definition, has been exposed a semantic trick. The letter also vindicates Dr. Richard Ebright who told National Review in May that the Wuhan research described in leaked grant proposals “epitomizes” gain-of-function research.

Paul and his argument were pilloried not just by Fauci — “you do not know what you are talking about,” “if anybody is lying here, Senator, it is you!” “…you are entirely and completely incorrect, the NIH has not ever and does not now fund gain-of-function research in the Wuhan Institute of Virology.” — but also by many in the media who reflexively sided with Fauci:

CNN’s Brianna Keilar, May 2021: “Nothing brings out Senator Paul’s propensity to act like an ass like a congressional appearance by Fauci, and that is really saying something… like Elvis’s Kentucky rain, Rand Paul’s COVID BS keeps pouring down, and it’s enough to fill the swimming pool in the Senate gym.” –

–Washington Post fact-checker Glenn Kessler, May 2021: “We  wavered between Two and Three Pinocchios, but decided on Two, because there still are enough questions about the work at the Wuhan lab to warrant further scrutiny, even if the NIH connection to possible gain-of-function research appears so far to be elusive. Kessler went on to allege that Paul, not Fauci, had created a “false, misleading impression by playing with words and using legalistic language that means little to ordinary people.”

–CNN’s Jake Tapper, July 2021: “I want to start with another kind of misinformation, the constant MAGA media and Republican lawmakers’ attacks on health experts, especially Dr. Anthony Fauci. Today on Capitol Hill, Fauci was confronted with an accusation basically from Kentucky Republican Senator Rand Paul… I don’t want to get into the details of what Senator Paul was attacking there and all that, but just the bigger picture here as a health professional we keep seeing this. Trump allies in Congress and governor’s offices and the media trying to make Fauci a COVID boogeyman. This is a 40-year public servant, he received the presidential medal of freedom…”

–MSNBC’s Ari Melber, July 2021, concurring with Fauci’s characterization of Paul’s comments: “Slanderous. Interesting, yeah and I can understand it. These are very serious issues that people are working on.”

–MSNBC’s Steve Benen, July 2021: “Rand Paul keeps doing this, apparently under the impression that there’s some value to the pointless exercises…The overarching problem appears to be relatively straightforward: the former ophthalmologist genuinely seems to believe that he has unique and valuable insights, which frees him to reject the assessments of actual experts…Is it any wonder that Anthony Fauci seems exasperated with Rand Paul?”

–CNN’s Brian Stelter, July 2021, while flashing tweets from Paul on screen: “These GOP lawmakers’ minds are made up, as they call for Fauci’s resignation, thereby creating more content for GOP TV.”

While Tabak took pains to rule out the possibility that the specific research described in his letter spawned COVID-19, citing genetic differences between the viral strains, he also conceded that EcoHealth was not transparent with the NIH. Rather than immediately informing the NIH that they had successfully bound a bat coronavirus to a human receptor, as they were required to, the Wuhan researchers concealed that fact until August 2021, a year-and-a-half into the pandemic.

So, it’s possible that Tabak, Fauci and their NIH colleagues were simply unaware what was being done with taxpayer dollars in Wuhan.

Experts like Ebright have been arguing for months that Paul was correct and that Fauci was playing semantic games. Yet our most prominent media personalities ignored them.

CNN’s homepage does not presently acknowledge the letter, instead leading with the story “Liberal Backlash Against Sinema Grows.”