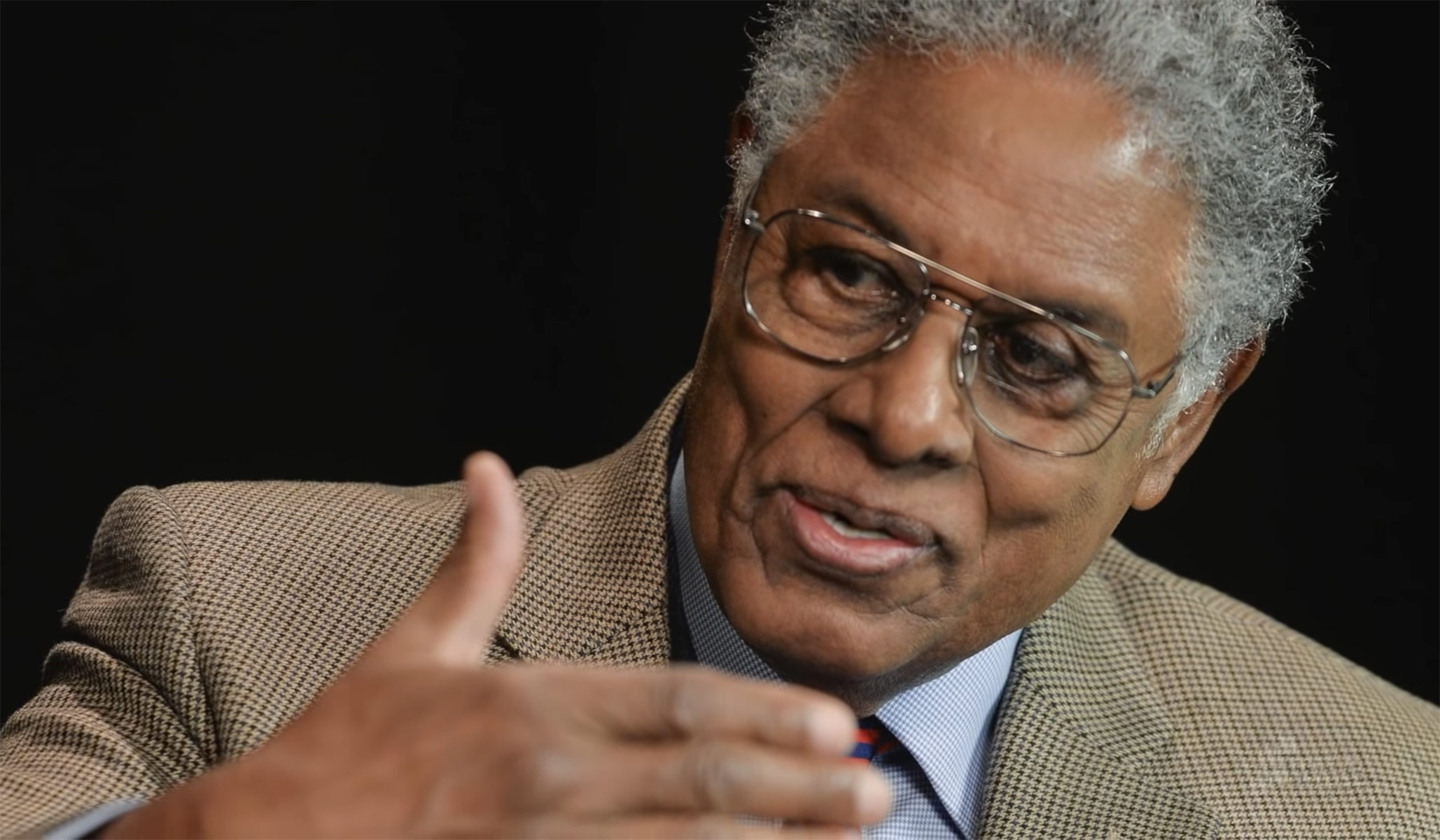 POLITICS & POLICY
A walk through some of the legendary economist’s most quotable lines.

Few social scientists are able to distill their thoughts into such punchy lines as Thomas Sowell, the great economist whose ideas are celebrated in Jason L. Riley’s inspiring book Maverick: A Biography of Thomas Sowell. Among Sowell’s many quotable remarks:

“I’ve studiously avoided entanglements with colleges for the past 35 years. The most intolerant place you can be these days is the academic campus.”

“Every educational program will always be a ‘success’ as judged by those who run it.”

“Much of what are called ‘social problems’ consists of the fact that intellectuals have theories that do not fit the real world. From this they conclude that it is the real world which is wrong and needs changing.”

“There are a lot of assertions and foregone conclusions that are stated over and over again, but repetition is not a substitute for facts.”

“I, of course, started out on the left and believed a lot of this stuff. The one thing that saved me was that I always thought that facts mattered.”

“I made enough enemies to get me in trouble and enough friends to get me out.”

“An awful lot goes into maintaining the image of blacks. You want to improve the reality, not the image.”

“I never thought that just because I’m black, that made me an authority on race matters. . . . Then I started reading what [the specialists] were saying, and so much of it was rubbish. I thought, ‘Good heavens, it’s time for us amateurs to get into this thing.’”

At Harvard, “smug assumptions were too often treated as substitutes for evidence or logic. . . . I resented attempts by some thoughtless Harvardians to assimilate me, based on the assumption that the supreme honor they could bestow was to allow me to become like them.”

Even “at the height of my Marxism, I read William F. Buckley and Edmund Burke, because I’d gotten in school, particularly in a ninth-grade science class, the idea of evidence, the importance of evidence and the need to test evidence.”

“I saw the obstacles to the advancement of blacks as involving more than discrimination by whites.”

“It annoyed me that we seemed to be constantly seeking validation and acceptance by white people — any white people at all, anywhere.”

“The current pleas for special treatment [of blacks] are a symptom of the attitude that needs changing and such treatment would be a big obstacle to the necessary change.”

“People who have been trying for years to tell others that Negroes are basically no different from anybody else should not themselves lose sight of the fact that Negroes are just like everyone else in wanting something for nothing.”

“I sometimes wonder if those of us who are black ought not to consider declaring some sort of moral amnesty for guilty whites, just so they won’t keep on saying and doing damn fool things that create additional problems.”

“Emphasizing teaching appeals to me, but too often ‘teaching’ means student public relations, and is judged by how happy you keep them rather than how much they learn.”

“It is depressing to hear ideas trumpeted as New! when the underlying reasoning involved was common in the 1840s or the 1790s — and discredited by the 1920s.”

“The double standard of grades and degrees is an open secret on many campuses, and it is only a matter of time before it is an open secret among employers as well. The market can be ruthless in devaluing degrees that do not mean what they say. It should be apparent to anyone not blinded by his own nobility that it also devalues the student in his own eyes.”

“Like many other things, black studies can be good as a principle and disastrous as a fetish. It cannot take the place of fundamental intellectual skills or excuse a copping-out from competition with white students.”

“Have been reading James Baldwin lately, and frankly I cannot see what all the shouting is about. It reminds me of a kid I knew in junior high school, who said a few bright things and was black, and therefore was a genius.”

“[James] Baldwin can write with skill and certain poetic insights, but his talents do not include sustained analytical reasoning. He is, in short, well endowed in those areas where there is an oversupply already, and is badly lacking in the things that are needed to make a dent in the race problem. Baldwin gives emotional release to those who feel as he does, but it is hard to imagine that he will change anybody’s mind.”

“One of the curious facts about the classical economists is that most of them were members of minority groups . . . whatever their varying personal fortunes might be, these men were never full-fledged members of the establishment.”

“Having written textbooks on introductory economics — one full of charts and graphs, and the other with neither — I know from experience that the second way is a lot harder to write.”

“An intellectual is rewarded not so much for reaching the truth as for demonstrating his own mental ability.”

“More justice for all is a contradiction in terms . . . ‘more’ justice in such a world means more forcible imposition of one particular brand of justice — i.e., less freedom. Perfect justice in this context means perfect tyranny.”

“The reach of national political power into every nook and cranny has proceeded with campaigns for greater ‘social justice.’”

“It’s not up to Machiavelli or Plato or anybody in between to be able to impose their superior wisdom on others. Because the systemic actions in a marketplace make their interventions in many cases superfluous and in other cases positively harmful.”

“I have a lot more confidence in what black people can do, if given the opportunity, than some of the other people seem to have. They seem to think that black people must either be led by the hand or else be handed something directly by the government.”

“The great achievement of the civil rights organizations has been getting the government off the backs of blacks . . . when they tried to get government to play a positive role, so-called, that’s where they’ve not only failed but where they’ve had counterproductive results.”

“What the welfare system and other kinds of government programs are doing is paying people to fail. Insofar as they fail, they receive the money. Insofar as they succeed, even to a moderate extent, the money is taken away.”

“I haven’t been able to find a single country in the world where the policies being advocated for blacks in the United States have lifted any people out of poverty.”

“That Jews earn far higher incomes than Hispanics in the United States might be taken as evidence that anti-Hispanic bias is stronger than anti-Semitism — if one followed the logic of the civil rights vision. But this explanation is considerably weakened by the greater prosperity of Jews than Hispanics in Hispanic countries.”

The “historic significance of the civil rights era was that it completed the American Revolution by making it apply to all people.”

“For many, ‘discrimination’ and ‘racism’ are not partial truths but whole truths, not just things to oppose but explanations to cling to, like a security blanket.”

“Affirmative action calls into question the competency of all blacks by trying to help some blacks.”

“Having been forced by birth to be on the receiving end of discrimination for many years, I cannot find the cleverness to justify discrimination now . . . if I now reduce this issue to a pragmatic question of whose ox is being gored, then what right did I have to be indignant before?”

“When Bill Allen was chairman at U.C.L.A. he violently refused to hire anyone on the basis of ethnic representation — and thereby made it possible for me to come there a year later with my head held up.”

“The moral regeneration of white people might be an interesting project, but I am not sure we have quite that much time to spare.”

“I remember thinking, I hope that in 20 years I won’t have to be one the people out there saying all these things, getting yelled at and screamed at, et cetera, because there will be a bunch of new people and, hopefully, it’ll be more mainstream. That has not happened.”

“Self-respect is the most important thing. Without it, the world’s adulation rings hollow. And with it, even venomous attacks are like water off a duck’s back.”